Around the world, women have always been on the frontlines of resistance movements, especially when it comes to rights to land and self-determination. Despite their crucial role in organizing and sustaining movements, women’s contributions have often been claimed by men or erased from history books. It is today, close to two years after her passing in 2016, and always, that we remember Berta Caceres was killed for her work defending indigenous Lenca land and the Río Blanco in Honduras (which is also the most dangerous country for earth rights defenders today). From Colombia to Indonesia, women continue to challenge state and corporate power in defense of earth rights.

In a previous blog post, we talked about the concept of extractivism, a Latin American term for an economic development model that depends on the extraction of natural resources and raw materials for exportation. Extractivism is rooted in colonialism and patriarchy and is perpetuated through the current neoliberal extractivist economic model.

This model destroys the earth’s resources as well as indigenous and forest-dependent communities and their traditions. It also has particular and unique impacts on women environmental human rights defenders, or earth rights defenders. 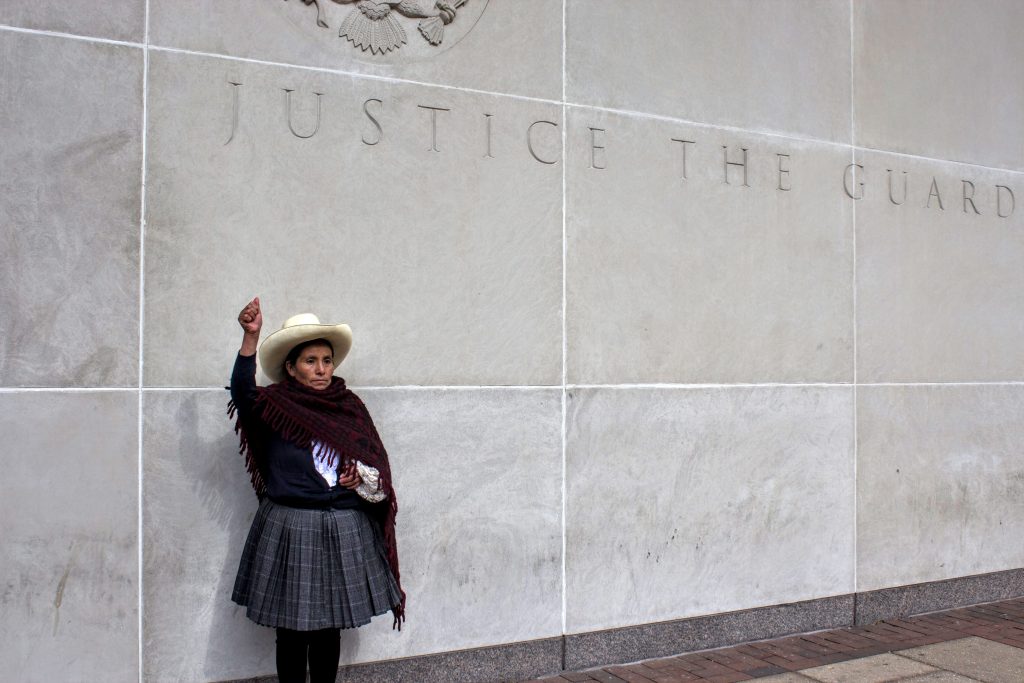 Máxima Acuña Atalaya de Chaupe, together with ERI, is suing Newmont Mining Corporation, one of the largest gold producers in the world, for using harassment and violence to try to evict Maxima and her family from their land.

Women’s Leadership Comes at a Cost

All earth rights defenders face threats and challenges due to their work in defence of earth rights. But women defenders who fight against extractivism often face more severe and more personal threats: not only do they challenge economic and financial interests, but their very acts of resisting, leading and speaking out publicly defy the traditional roles assigned to women. Women’s identities have been defined in relation to others: they are mothers and wives, they are sisters and daughters. These roles dictate their responsibilities. While most women activists take pride and inspiration from these identities, performing in accordance with society’s expectations also adds a lot of pressure to their lives, which are already shaped by systematic violence and discrimination.

Women earth rights defenders face death threats and criminalization. Their houses and offices are broken into, just like other earth rights defenders. But they also face stigmatization as “whores,” “easy women,” or “bad mothers,” and receive sexually charged threats and threats to their families. The impact of this slander can lead to divorce and expose their children to bullying in school. These threats can force women to either quit their activism or leave their family homes, and to be ostracized by their communities. Threats to women earth rights defenders come from the usual suspects such as corporations and the state but also from within women’s own families and communities. The kinds of violence used against them in the public and private spheres are interlinked and rooted in social, economic and political power relations.

Self-Care: “An Act of Political Warfare”

Given the stress and anxiety that women activists face, it is no wonder that the importance of self-care and wellbeing for activists was first discussed in the women’s rights movement. Women activists were simply burnt out. They were afraid to admit it, even to themselves, not wanting to be seen as complaining, weak or self-indulgent.

“Caring for myself is not self-indulgence, it is self-preservation and that is an act of political warfare.”

This adage was embraced by the women human rights movement, recognizing that our opponents not only want to take away our land and livelihoods by threatening us, they also want to make us live in fear and desperation and take away our dignity. Being happy and healthy is therefore not just a way to sustain ourselves and increase our effectiveness in fighting for justice and equality. It is also a defiant stance against those who want to bring us down.

Physical and mental wellbeing are slowly becoming a fixed part of traditional security curricula for human rights defenders. These curricula used to be almost exclusively focused on physical – and later digital – security. This integrated approach is now mostly known as holistic security. Trainings now give more attention to how fear and stress impact our bodies and minds, and to what activists can do to deal with this. Women earth rights defenders make it very clear that self-care is not just about caring for one’s self (certainly not in the way that it has been featured recently in Western popular media). They show us that self-care is first and foremost about solidarity and caring for each other: checking in with each other to see how we are feeling, paying attention to signals that may indicate unhealthy stress levels, and creating safe channels to discuss the things that we think make us look weak. 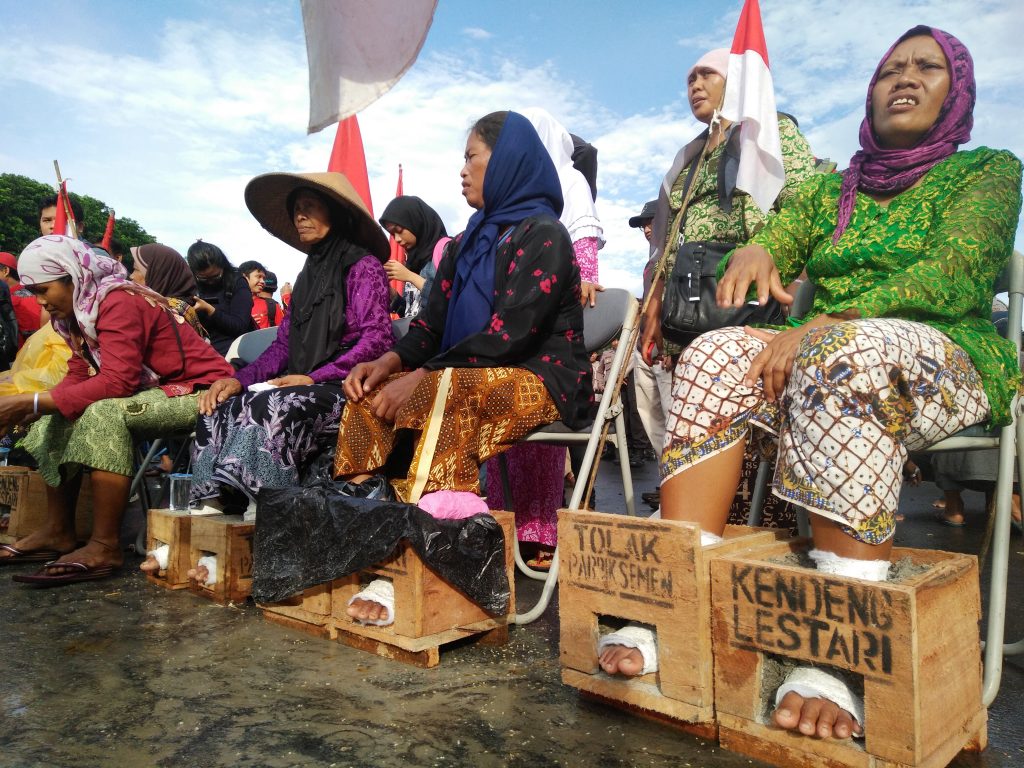 Women in Kendeng, Indonesia have been fighting against a state-owned cement factory since 2016 through protests where they encase their feet in cement (Photo by Magdalene)

The Movement to Protect Starts on the Ground

Protection of women earth rights defenders happens at different levels. Local mechanisms are usually the first line of defence and being able to turn to strong solidarity networks to find shelter, advice and mental support is crucial for women earth rights defenders. In 2010, The Mesoamerican Initiative of Women Human Rights Defenders (IM- Defensoras) was founded to strengthen and sustain women activists so that they can do their human rights work in conditions of safety and wellbeing. The network works to provide an empowering space for women to feel safe to discuss their fears and aspirations, build stronger alliances between groups and strengthen capacities for protection. The network also aims to enhance existing security mechanisms, including state-sponsored mechanisms, by making them more gender-sensitive.

Gender-sensitive protections for earth rights defenders should start with an official recognition that women face systemic discrimination and deal with gender-specific risks that call for different approaches. Examples include ensuring access to female counsellors and police officers, providing safe houses that allow women to stay with their children and making sure queer and non-binary women are included. Gender-sensitive protections for earth rights defenders must take into account how women’s needs differ across cultures and ethnicities. Indigenous women, for instance, might never choose to relocate because separation from their territory, community and language would be unacceptable to them.

March 8 is International Women’s Day. It was first celebrated in the early 20th century in honor of the women in the labor and suffragette movements and was adopted by the UN to be observed worldwide in 1975. We join in celebrating the struggles but especially the courage and powerful accomplishments of the women earth rights defenders in our networks and beyond. Recognizing these women, especially at the international level, can help show perpetrators that there is a political cost to violating a person’s rights. This recognition thereby constitutes a small part of the protective shield that we can build around women earth rights defenders and also makes sure that their voices are heard and amplified by our own. 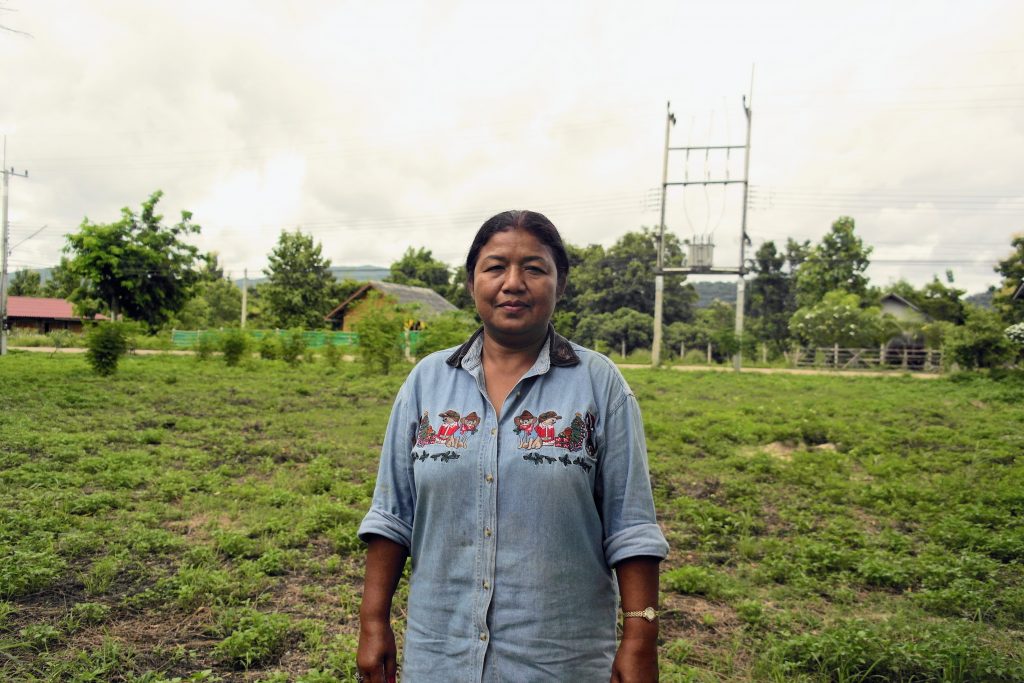 Maliwan Nakwirot, a leader from Mae Moh village in northern Thailand, has fought to protect her community from the impacts of the nearby coal-fired power plant and mine. Pollution has led to over 300 deaths and caused respiratory problems for thousands. She has led her community to demand remedies and justice.