There is a well-known piece of graffiti in La Paz, Bolivia, that reads: “Ni la Tierra ni las Mujeres somos territorio de conquista” – meaning, “Neither the Earth Nor Women are Territory for Conquest.” Though the phrase seems simple, it strikes at the heart of the relationship between the domination and exploitation of women and women’s bodies and the domination and exploitation of the earth and our environment. 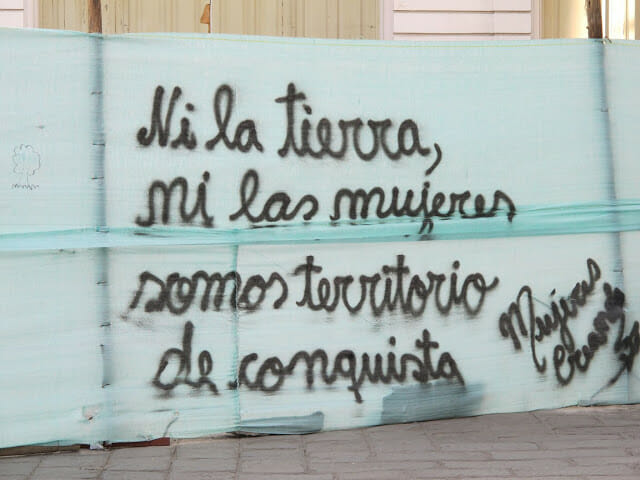 The communities and earth rights defenders that we work with confront the exploitation of the earth via extractivist development models. Extractivism, a term popularized in Latin America, refers to a model of economic development that depends on the extraction of natural resources and raw materials for exportation. The archetype of extractive economies is oil and mining, although extractivist philosophies also lie at the core of much large-scale agribusiness and megaprojects.

This model has its roots in colonial systems, as do its patriarchal undertones. Indeed, colonizers often described their territorial conquests in gendered terms – the land to be conquered was described as female. Implied in this feminization of the land was the opportunity for conquest, for subordination, and for plunder. And parallel to the conquest of new land was the conquest of the indigenous women who inhabited it, through rampant sexual violence. These patterns of colonial violence—the dueling exploitation of the earth and the violent assault on indigenous women—are echoed in today’s neocolonial extractivist development model.  Women earth rights defenders —and particularly indigenous and Afro-descendent women earth rights defenders —face the twin threats of the destruction of their natural environment and home, and the violation of their physical integrity and autonomy.

A recently released report by the Inter-American Commission for Human Rights highlights the links between development projects, investment, extraction, and violence against indigenous women and girls. For example, the report explains, development projects often lead to the environmental degradation of indigenous territories, leading to forced displacement and poverty. That “situation of poverty and vulnerability combined with the arrival of workers and laborers in these remote areas, and in addition to prejudice and discrimination, has led to forced prostitution and trafficking of indigenous women and girls.” The report also documents an increase in sexual violence and domestic violence in areas located near large-scale mining projects, citing cases in Suriname, Brazil, and Guatemala.

ERI has represented dozens of women who were brutally raped by security guards working for Barrick Gold Corporation at their gold mine in the remote highlands of Porgera, Papua New Guinea. One woman earth rights defender from Porgera, Everlyn Gaupe, explained the layers of violence that women in her community have suffered in connection to the mine:

“Barrick has traumatized us in many ways. By impacting our environment. By keeping the communities in the same place where it is mining without resettlement. And all the harms it is doing to us, in shooting, killing, raping, and assaulting. And also the effects from the environment. We value our waters and the relationship we have with the bush. They take valuable minerals out from our land and make us, the indigenous community, suffer.”

Just last week, another ERI client and celebrated Peruvian environmentalist, Máxima Acuña Chaupe, filed a complaint against Peru before the Inter-American Commission for Human Rights for violations to her physical integrity. Indeed, extractivism is not just connected to sexual and physical violence – it also deepens and perpetuates structural violence. Some examples of the ways that structural violence is differentially experienced by women include: 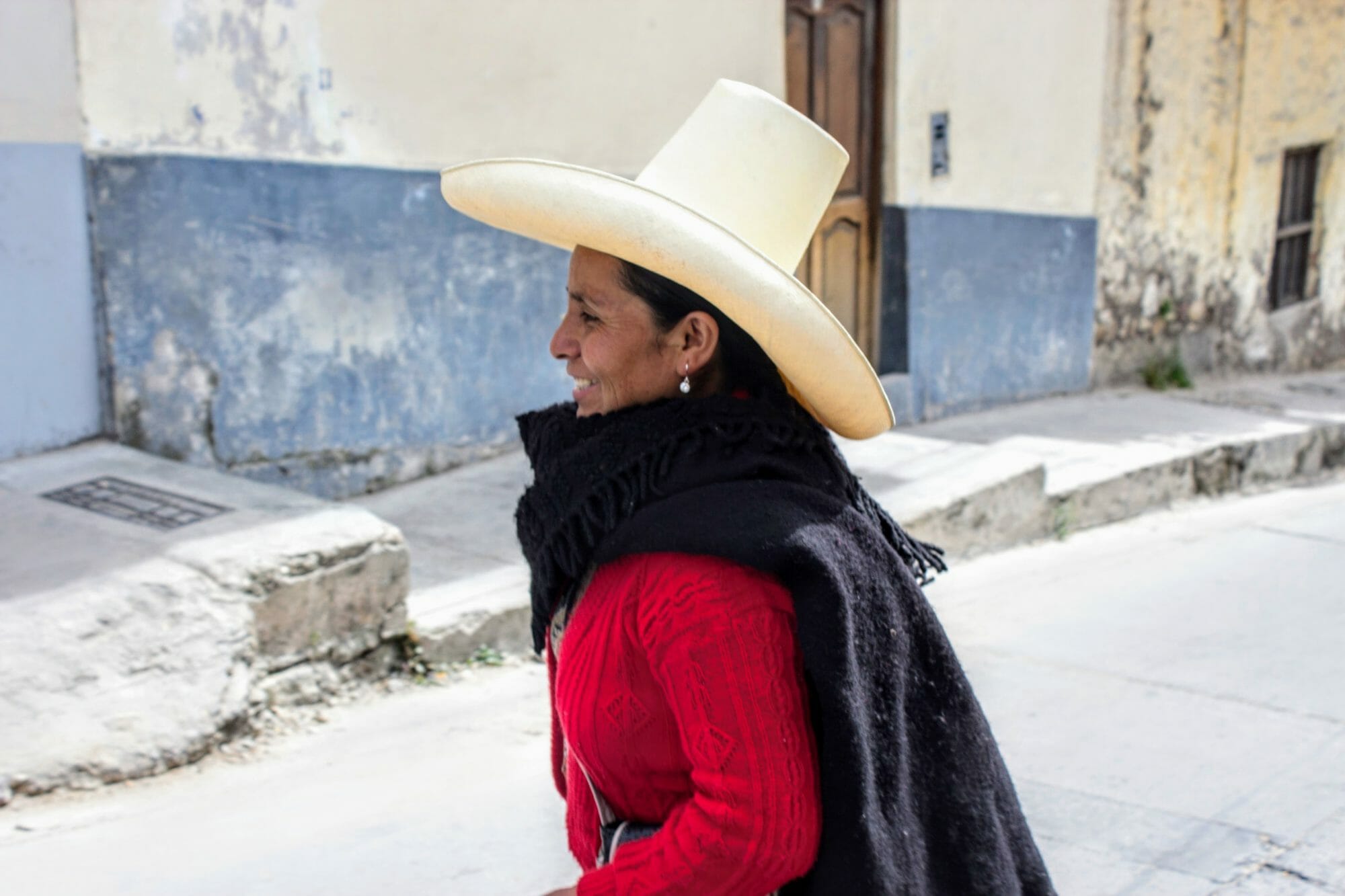 Goldman Environmental Prize recipient Máxima Acuña Chaupe recently filed a complaint against Peru before the Inter-American Commission for Human Rights for violations to her physical integrity.

Earlier this month, on November 25th, was the International Day of Violence Against Women. That date was chosen because it marks the anniversary of the murder of Patria Mercedes Mirabal Reyes, María Argentina Minerva Mirabal Reyes, and Antonia María Teresa Mirabal Reyes. Patria, Minerva, and María Teresa, known as the Mirabel sisters or “The Butterflies” (in Spanish, “Las Miraposas”), were political activists who resisted the dictatorship of Rafael Trujillo in the Dominican Republic. On November 25, 1960, the three sisters were brutally assassinated by the Trujillo regime. The story of ‘The Butterflies’ serves as an important reminder that women’s activism and resistance in patriarchal societies is always a challenge to social norms, a challenge that far too often makes their activism all the more precarious. 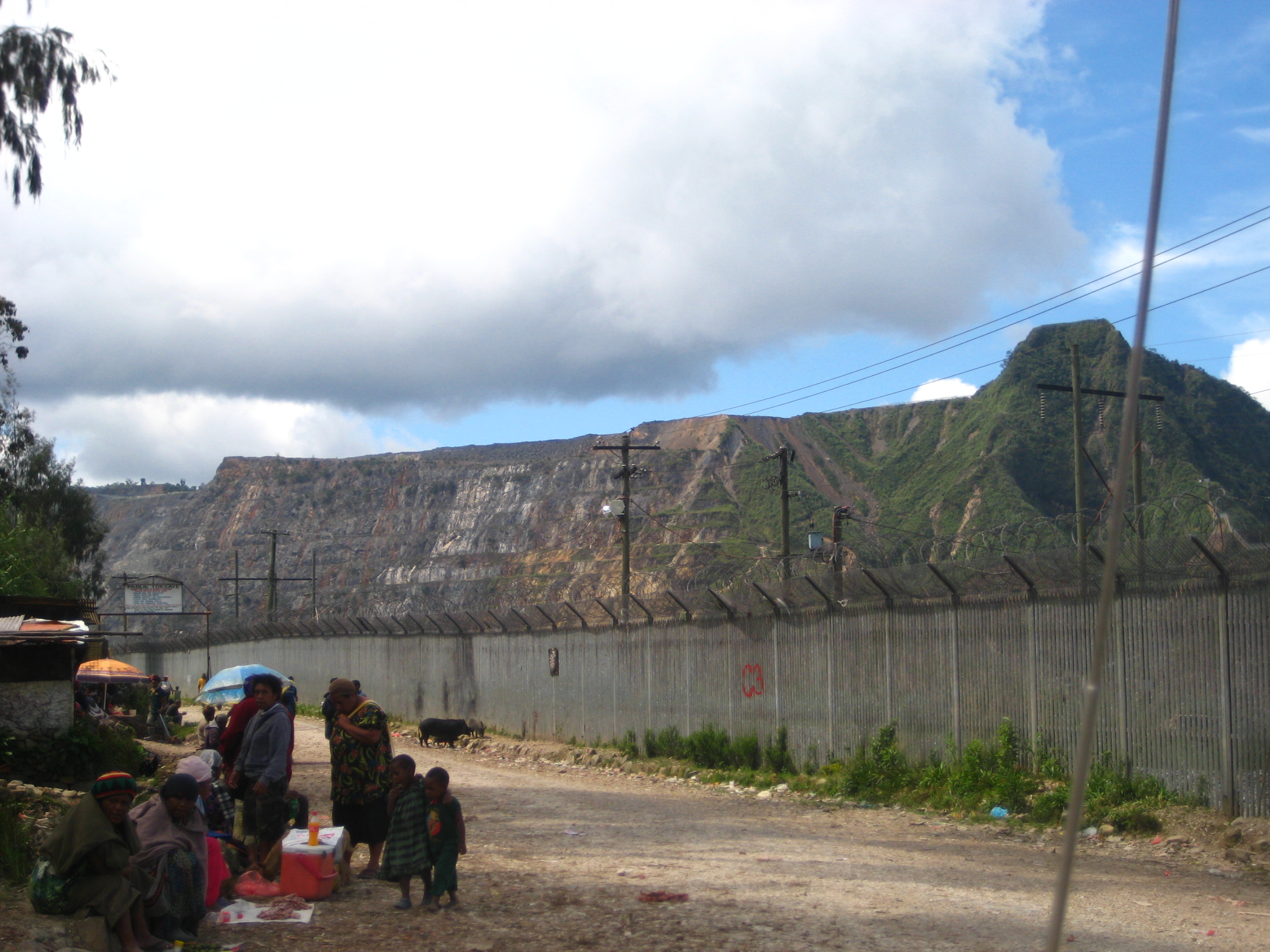 Lely Kesa, another woman earth rights defender from Porgera, Papua New Guinea, explains how she came to be involved in resisting the local mine, first as a translator and then as an activist, when even activism efforts were dominated by men:

“They are getting samples of pollution, soil, river and creeks, to know if there are chemicals. I worked with ERI as a translator with the eleven women who got an out-of-court settlement. There wasn’t anyone else to speak out. Everything is male dominated. I try to make my voice loud in front of the company.”

Nothing About Us Without Us: Women Earth Rights Defenders and the Potential for Transformational Solutions

Despite this myriad of challenges, women earth rights defenders all over the world are coming up with innovative solutions and strategies to counter the threats that extractivist industries pose to their communities.

Lely explains the multifaceted strategies that she and her colleagues are implementing in their community:

“We are teaching the women how to read and write, just under a tent, under a big tree. We have to restore us again….When the mining company goes away, people will still be there. We need something to restore us back. Sustainable development like replanting, nurseries, flowers and trees. We’re trying to get seeds from other places in PNG to help youth and single mothers. To learn skills like crafts sewing clothes, weaving, cooking, baking. We can learn from each other as advocates, we can become mentors, teach women about business, how to manage their money, how to manage their time. Teach them about human rights instead of discrimination.”

Women earth rights defenders are particularly well-placed to understand the ways that extractivist development affects women in their communities, and therefore bring an invaluable perspective to the work of generating transformative solutions. Today, and every day, we must continue to work to counter the forces that try to drown out their voices. Only by understanding the ways that extractivist development and patriarchy intersect and complement each other and other axes of oppression can we hope to counter both. In the words of Berta Cáceres, the environmentalist and Lenca indigenous activist who was brutally murdered in her home country of Honduras on March 2, 2016: