Shell’s Kiobel Brief is an Insult to South Africa

I’ve been working in the human rights and corporate accountability field long enough that I’m rarely surprised by the shenanigans large corporations will pull to maximize their profits, to greenwash their brand, and to avoid responsibility for the negative impacts of their work. But last night I read the brief that Shell had just filed with the Supreme Court, arguing that it should be immune from suit for participating in human rights abuses against protestors in Nigeria, and I found myself fuming when I encountered this passage:

“South Africa, for example, explained that it had ‘enacted legislation … [that] deliberately avoided a “victors’ justice” approach to the crimes of apartheid and chose instead one based on confession and absolution, informed by the principles of reconciliation, reconstruction, reparation and goodwill.’”

My colleague, Jonathan, has written a preliminary legal analysis of Shell’s brief, including a response to this particular section, but what I want to talk about, in this post, is the perverse moral gymnastics that Shell had to employ to reference South Africa’s Truth & Reconciliation Commission – one of the most noble-intentioned undertakings in human history – in defense of their own disregard for justice and human rights. My path to the human rights movement began in South Africa in 2002, studying the reconciliation process, so this is a topic very dear to my heart.

In early 2006, during my second trip to South Africa, I spent an afternoon in a dark, dusty, crowded classroom in the township of Gugulethu, outside of Cape Town, speaking with two remarkable people: Linda Biehl, an American mother whose daughter, Amy, was murdered in the closing days of Apartheid, and Ntobeko Peni, one of Amy’s convicted killers. Years earlier, when the four convicts applied for amnesty through the Truth & Reconciliation Commission (TRC), Linda and her husband had attended the hearing, supported the amnesty request, and, upon their release, shaken hands with their daughter’s killers.

This alone would be an astounding story of forgiveness and compassion, but by the time I met them in Guguletu, Ntobeko and Linda’s story had become even more improbable: they were working side by side, daily, at the Amy Biehl Foundation, running youth empowerment programs and educating visitors on restorative justice.

South Africa’s TRC is not without critics. At its worst, it left many feeling that they were robbed of justice and then forced to watch as perpetrators of atrocious acts were granted amnesty. But the legacy of Amy Biehl is the TRC at its very best: courageous individuals transcending unimaginable obstacles, finding forgiveness and hope in their darkest hour, seeing in each other unlimited human potential, and working together to build a better future.

When Linda and Ntobeko speak, you feel the past haunting them – the air just feels heavy around you – and yet you can’t leave that room without feeling hope that humanity will one day eliminate the violent abuses and inequities that plague our world. So moved was I by this experience, and all my time in the townships, that my arm now bears a tattoo of the word “ubuntu,” the ethic of human interdependence that reverberated through every TRC hearing and resonates still across all of South Africa.

None of this matters one lick to Shell.

Shell isn’t hoping to go before some sort of truth commission, to open their hearts on television and disclose every last detail of their crimes and trust the commission to decide whether those crimes met the criteria for amnesty.  (The TRC only granted amnesty to those who told the truth about their crimes and demonstrated that they were politically motivated and proportionate to the political objective. And contrary to popular belief, most amnesty applications were denied.)

Shell isn’t hoping to sit down with the families of the Ogoni Nine, to look them in the eye and apologize for their role in the torture and execution of their loved ones, to cry with the families and ask their forgiveness.

No, Shell is just grasping at every excuse they can find to get this case dismissed and protect their bottom line.  Shell wants the case to go away, justice be damned.

Shell hopes that their reference to the Rainbow Nation will distract the court from the black stain they’ve left on Nigeria. And if that doesn’t work, Shell hopes their disparaging reference to “victor’s justice” will trick the court into viewing ATS cases as a neo-imperial overreach, rather than a critical pathway to justice for villagers, minorities, and other marginalized groups who have suffered horrible human rights abuses due to corporate greed and corruption.

Shell’s latest argument is a grave insult to the courage and humility of Linda Biehl and Ntobeko Peni, and to every person in South Africa who worked so hard to ensure that the Apartheid government was replaced by a just society. 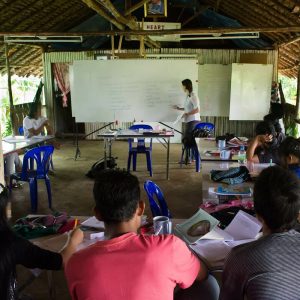