Governments across Latin America and the Caribbean can make history and set new standards for the protection of the environment and human rights by signing the Escazú Agreement during the UN General Assembly in New York on today. We joined over 170 NGOs in an open letter delivered to heads of state of all 33 countries in the region to sign the agreement and then adopt rapid and effective measures to implement it in their respective countries.

We’ve written about this agreement before, check it out here.

Amplify this story by using #Sign4TheEnvironment on social media.

On 27 September 2018, countries in Latin America and the Caribbean will have the opportunity to put in place a new instrument to protect the environment: The Regional Agreement on Access to Information, Public Participation and Access to Justice on Environmental Matters in Latin America and the Caribbean (the Escazú Agreement).

Your governments can make history and become leaders in environmental protection by signing the agreement during the opening for signature ceremony which will be held in the context of the Annual General Debate of the United Nations General Assembly in New York.

The Escazú Agreement is a key tool that will allow for a more participatory approach to decision-making, policymaking and projects relating to the environment and decreasing and mitigating conflicts driven by a lack of effective participation of affected communities. The Agreement delves into the human rights obligations that the countries in the region previously acquired through other international instruments with regard to the right of access to public information; participation in decision-making, including the adoption of inclusive, participatory and representative decisions at all levels; the right to a healthy environment; equal access to justice with regard to environmental rights; and the protection of human and environmental rights defenders, among others.

These obligations acquired by the countries of Latin America and the Caribbean, together with the commitments made within the framework of the Sustainable Development Goals and other international agreements, reflect a commitment to environmentally friendly development that respect human rights and future generations.

In addition, at the 48th General Assembly of the Organization of American States (OAS) in June this year, your governments welcomed the signing of the Escazú Agreement with the acknowledgment that the human person is the central subject of sustainable development and should be an active participant in this. You also acknowledged that the Agreement is a means to guarantee a safe environment in which individuals, groups and organizations that promote and defend human rights related to the environment can act without facing threats, restrictions, attacks or danger.

Signing the Escazú Agreement is the first step required to include environmental access rights into the government agenda. It represents a historic opportunity for your governments to send a clear message to your citizens and the international community regarding your firm commitment to this global agenda for the protection of human rights associated with a healthy and sustainable environment. A global agenda that will benefit everyone in the region and around the world.

We call on your governments to sign the Escazú Agreement on 27 September 2018 and submit it to the competent national bodies for its immediate ratification. Now is the time to deliver real steps for real change. Latin America and the Caribbean need you to make the promise of the Escazú Agreement a reality for millions of people in the region. We also urge your governments to adopt rapid and effective measures to implement the provisions of the Agreement.

176 organizations across the region working on a diverse range of issues, including environmental protection, human rights, democracy, development and governance (see attached) 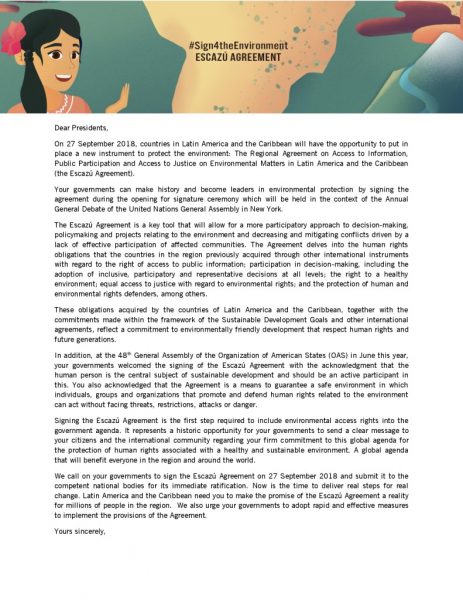