As worldwide threats against human rights and environmental activists continue to grow, EarthRights International is supporting the global movement to fight back. This month we launched our action plan and interactive web platform entitled Fighting Back: A Global Protection Strategy for Earth Rights Defenders. We held events in Washington D.C. and Bangkok to lay out a roadmap to protect the rights of earth rights defenders so that they can continue their important work of protecting our planet.

Environmental and human rights activists are facing a global wave of repression and violence linked to land disputes, natural resources, and climate change. Two hundred and seven killings of land and environment defenders were documented in 2017, the worst on record. This year will likely be just as bad, if not worse.  In response to this violence and to mark the 20th anniversary of the UN Declaration on Human Rights Defenders, we launched Fighting Back as a roadmap to protect the rights of earth rights defenders so that they can continue their important work of protecting our planet.

“They [extractive companies] come to our communities not to develop the country but to get rich,” said Milton Sanchez, earth rights defender from Peru. 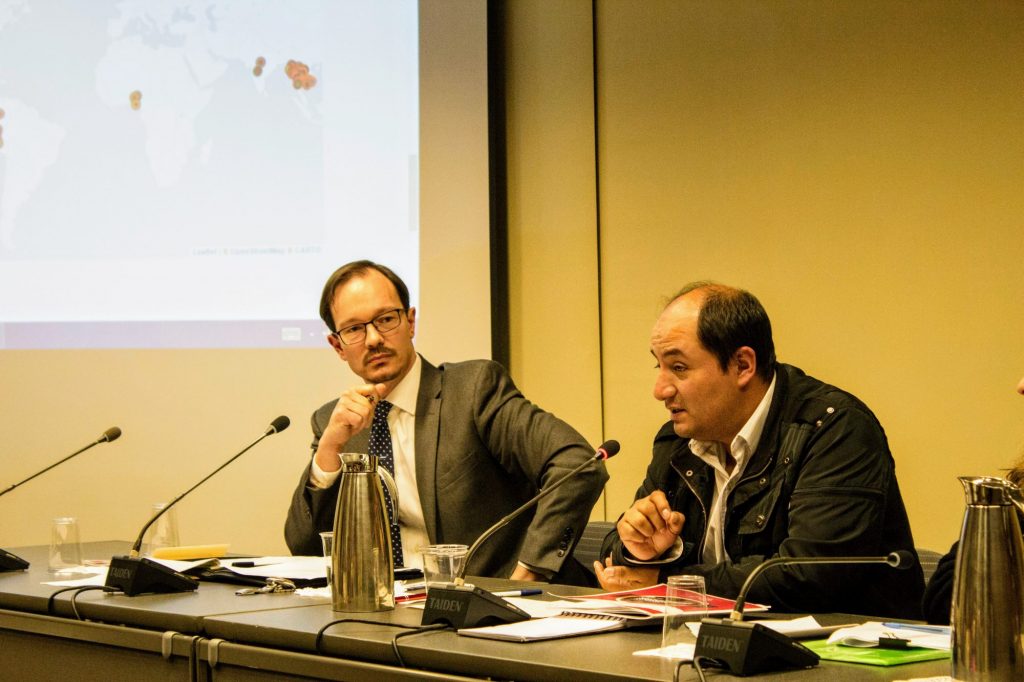 Earth rights defenders are often the only ones standing between powerful (often violent) elites, and the world’s most valuable resources. Murder is not the only weapon being used to silence them. Other kinds of threats and intimidation are on the rise, which are much more difficult to document.

Extractive industries are one of the deadliest drivers of violence and threats. Milton Sanchez of Cajamarca, Peru, is all too familiar with the threats earth rights defenders face. He himself has over 60 legal cases brought against him by the Peruvian government for fighting to protect his community from the impacts of an open pit gold mine.

The threats he faces are compounded by contracts between Peru’s national police force and extractive companies.

Police forces, who are supposed to protect the nation’s people, can also work as companies’ agents of repression, squashing protests, shooting civilians, and threatening defenders who are trying to stop harmful projects.

ERI and local partner organizations are working to expose these police contracts (we have found over 130 of them) and will launch our findings next year. 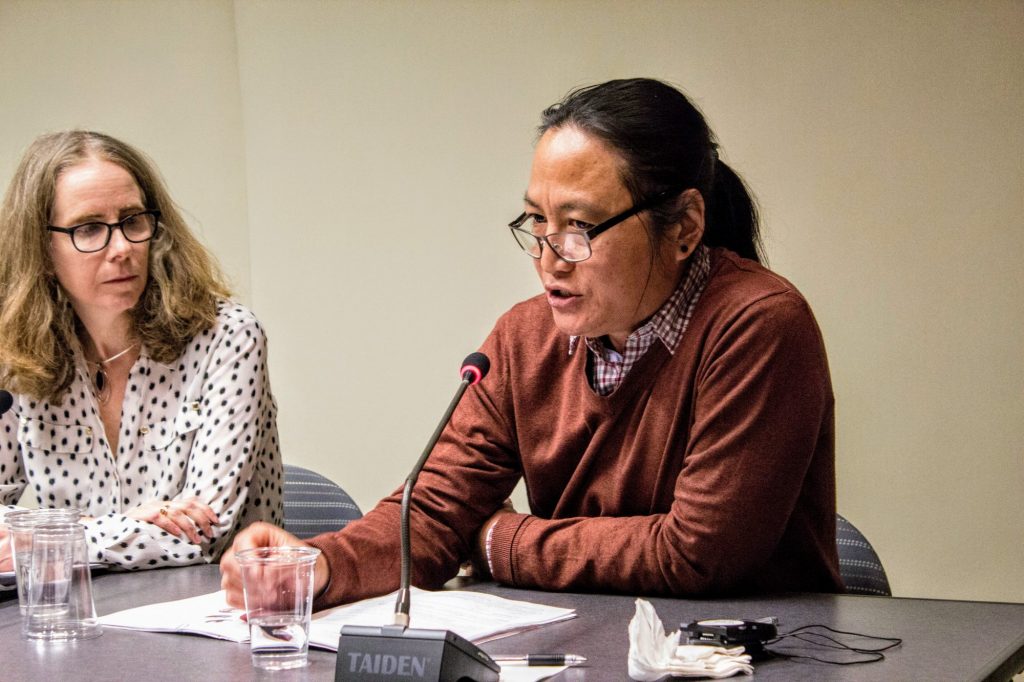 ERI Co-Founder and Executive Director Ka Hsaw Wa speaks about the violence he faced as a young earth rights defender in Burma.

In Southeast Asia, earth rights defenders continue to be criminalized, oppressed and killed for their activism.

Earth rights defenders in the Mekong region experience intimidation, imprisonment and other threats. In addition, a closing of political space in countries like Cambodia and Myanmar has also contributed to attacks on independent media and criminalization of defenders and their organizations.

Lim Kimsor powerfully highlighted how in Cambodia corruption and collusion are driving unchecked development and destroying the country’s precious resources and what she, together with her colleagues at Mother Nature Cambodia, is doing to counter these crimes often at a very high risk.

Oo Kyaw Thein, ERI’s Myanmar lawyer, told the audience of his way of fighting back by supporting Khaing Myo Htun as an earth rights defender from Rakhine State when he was arrested and imprisoned in 2016 for exposing crimes committed by the Myanmar military in his state. Oo Kyaw also explained how he and other lawyers are facing risk for defending defenders.

Please join us in supporting them. 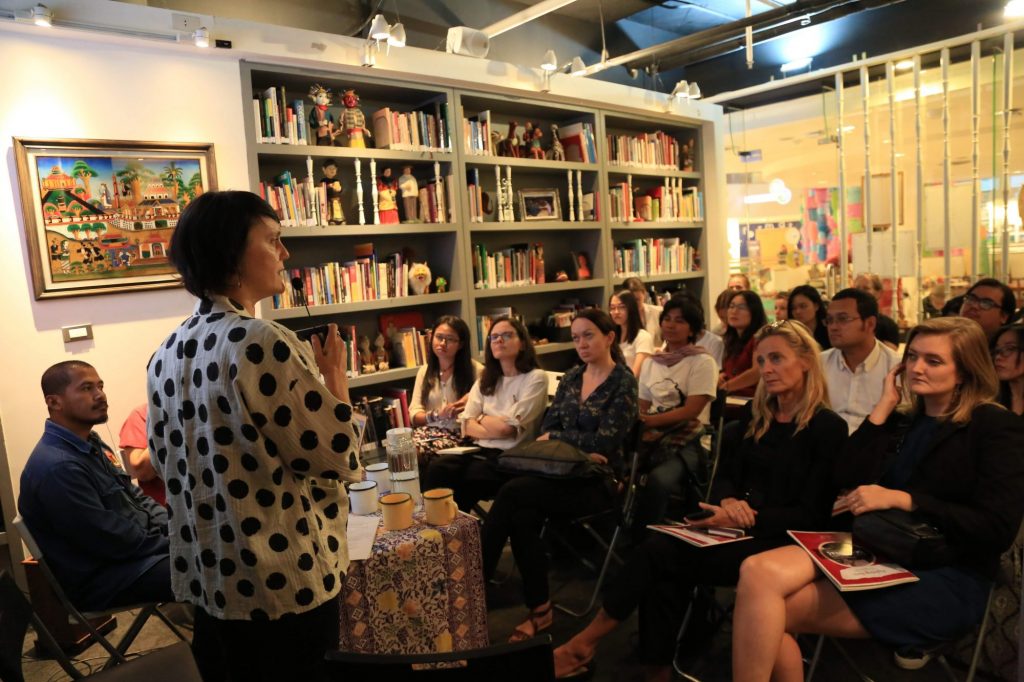 A roadmap to a better future

Earth rights defenders are instrumental in supporting their communities to stand up for and claim their rights: they expose injustice, demand accountability from their governments, and change the laws that undermine human rights. They are advocates, organizers, trainers, educators, and connectors. Because they are often the last line of defense between frontline communities and ecosystems, and powerful elites that seek to extract and exploit those resources, their lives and security can be threatened.

“Protecting the earth has become one of the world’s most dangerous professions. Women are especially at risk. Urgent action is needed now by all stakeholders to stop this violence.”

The global protection strategy outlined in the report and accompanying web platform contain concrete actions that we believe will help reduce the number and severity of attacks against earth rights defenders. The global protection strategy is based on the ‘protect, prevent, reveal, and redress’ framework developed by human rights, environmental, and funding organizations.

Our work around earth rights defenders will continue to intensify in 2019 as global systems for exploiting natural resources continue to be designed to make profit, not to respect the rights of local communities.