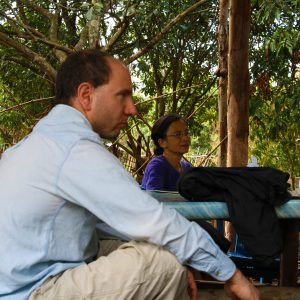 Rick Herz is a 1993 Order of the Coif graduate of the University of Virginia School of Law, where he served on the Virginia Law Review. In 1994, he clerked for the Hon. Raymond A. Jackson, U.S. District Judge for the Eastern District of Virginia. Rick was the 1997-1998 Natural Resources Law Institute Fellow at Northwestern School of Law of Lewis and Clark College, where he wrote”Litigating Environmental Abuses Under the Alien Tort Claims Act: A Practical Assessment” , an article about suing multinational corporations for environmental abuses under the Alien Tort Claims Act. He is a member of the New York State Bar. At ERI, Rick directs our work on cases against multinational corporations for international human rights and environmental abuses. As such he is co-counsel for the plaintiffs ERI’s past and ongoing litigation, including Doe v. Unocal, Bowoto v. Chevron, Sahu v. Union Carbide, Wiwa v. Royal Dutch Petroleum, Maynas v. Occidental Petroleum, Doe v. Chiquita, and API v. SEC. He has also filed amicus briefs in the United States Supreme Court and various U.S. Circuit and District courts on behalf of NGOs and law professors in important human rights cases, and he advises human rights and environmental activists and lawyers on international law.

Richard Herz works from CT, and is admitted to practice only in NY. He does not practice in the courts of the District of Columbia.