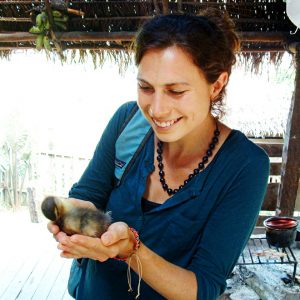 Marissa joined EarthRights in 2011, when she helped launch EarthRights’s new Amazon Office in Lima, Peru and assisted in developing its Amazon legal program. Since then, Marissa has focused on developing and implementing legal and advocacy strategies to defend the rights of frontline communities facing oil pollution, mining, land-grabbing and paramilitary violence in cases against corporations, governments and financial institutions. She has litigated several landmark human rights and environmental justice cases before U.S. courts, including Doe v. IFC, Doe v. Chiquita Brands, Maxima Acuna-Atalaya et al. v. Newmont Mining, Minis v. Thomson Safaris, and Maynas v. Occidental. Marissa has also developed and served as counsel on cases before the Inter-American Commission and Court on cases such as TIPNIS v. Bolivia and Pueblo U´wa vs. Colombia. She has also appeared as counsel in Colombia’s Special Jurisdiction for Peace (JEP).

Marissa is a 2011 graduate of Harvard Law School and holds a B.A. in Political Science from Swarthmore College (2006). She was also a 2005 recipient of a Harry S. Truman scholarship to pursue a career in public service.

She is fluent in Spanish and is currently admitted to practice law in New York, New Jersey and the District of Columbia.

When she is not litigating or working with communities, Marissa is chasing around her toddler or making pottery.