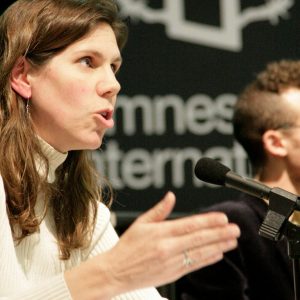 Katie Redford is the Co-Founder of EarthRights International. She is a graduate of Colgate University and the University of Virginia School of Law, where she received the Robert F. Kennedy Award for Human Rights and Public Service. She is a member of the Bar of the Supreme Court of the United States and the Massachusetts State Bar. She has served as counsel to plaintiffs in our various lawsuits, including the landmark case Doe v. Unocal. Katie received an Echoing Green Fellowship in 1995 to establish EarthRights. Katie is an adjunct professor of law at the University of Virginia and the Washington College of Law at American University, and also serves on the boards of the Center for International Environmental Law (CIEL), the International Corporate Accountability Roundtable (ICAR), and the Slingshot Development Fund. She also serves on the Advisory Board of True Costs Initiative and the Legal Advisory Board of Free Speech for People. She has published on various issues associated with human rights and corporate accountability. In 2006, she was selected as an Ashoka Global Fellow. Katie was a 2007 Rockwood Leadership Fellow and received the Riesenfeld Award at Berkeley College’s School of Law in 2018. Most recently, Katie was named a 2018 Bellagio Fellow. Katie has been profiled in a variety of media including the books Be Bold and Your America: Democracy’s Local Heroes, and the award-winning documentary film Total Denial.

In January of 2020, Katie left her role as Director of EarthRights to launch the Equation Campaign. Katie continues to serve as an advisor to EarthRights and is a member of our Legal Committee.