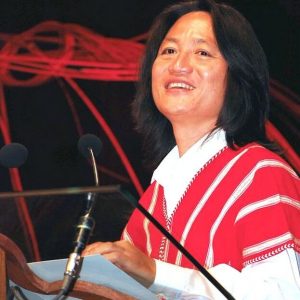 Ka Hsaw Wa is Co-founder and Executive Director of EarthRights International, and a member of the Karen ethnic nationality from Myanmar (Burma). He received his M.A. from the School for International Training (SIT) in Intercultural Leadership and Management. In 1988 after he was captured and tortured, he participated in the 1988 student uprising calling for human rights, democracy and an end to military rule. In the ensuing crackdown by the Burmese regime, he fled the country. Since that time, he has traveled clandestinely to remote areas of Burma to interview witnesses and victims of human rights abuses perpetrated by the junta and exposed these abuses to the international community.

In the course of this investigation, Ka Hsaw Wa realized that his people face another threat—that of transnational corporate investment aimed at exploiting Burma’s resources. He found that the killings, rape, torture, forced labor and relocation of villages were all connected to the exploitation of natural resources in the name of development. In particular, the Yadana pipeline which cuts through the Tennaserim region of Burma has been the cause of widespread brutality and forced labor, compounding the persecution of ethnic minorities populating this area.

In 1995, Ka Hsaw Wa joined two American lawyers to found EarthRights International (ERI), an organization initially conceived in response to the Yadana Project. Subsequently, ERI has applied the earth rights concept to other regions in the world where protection of human rights and the environment is intrinsically connected. As ERI’s co-director, Ka Hsaw Wa has been instrumental in the creation of new strategies for corporate and government accountability as well as innovative training programs aimed at building the capacity of indigenous peoples to protect their rights, restore control over natural resources and conserve the environment.

Ka Hsaw Wa has been honored for his work with the Goldman Environmental Prize in 1999,  the Reebok Human Rights Award in 1999, the Conde Nast Environmental Award in 1999, the Sting and Trudie Styler Award for Human Rights and the Environment in 2004, and the Ramon Magsaysay Award for Emergent Leadership in 2009. In speaking tours around the world, Ka Hsaw Wa has made the international community aware of the oppression his people suffer under the military junta and inspired many new activists to take action to defend the people of Burma.

“We will not let them defeat us. We know the companies and their military partners have lots of money, guns, power and influence. But they do not have what we have. We have truth, we have justice, we have courage, and most importantly, we have each other to protect human rights and the environment. We will win.”