From the banks of Mekong River to the mountains of Colorado, 2018 has been another exciting year for EarthRights International. We argued our first case in front of the Supreme Court; we held the first Forest Defenders conference in Thailand; we launched the Protect the Protest Task Force; we trained our third class of indigenous lawyers from the Amazon; and we filed the first climate change lawsuit on behalf of a non-coastal state.

Check out the journey the last year has been. Thank you for standing with us along the way. 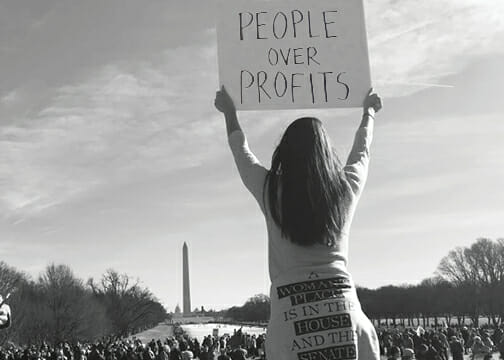 We kicked off 2018 with more determination than ever to fight for people and planet. Many current and former ERI staff participated in marches and actions around the world in support of women’s rights and democracy. In this photo, our Development Manager, Michelle Fantone, is at the Women’s March in Washington D.C. 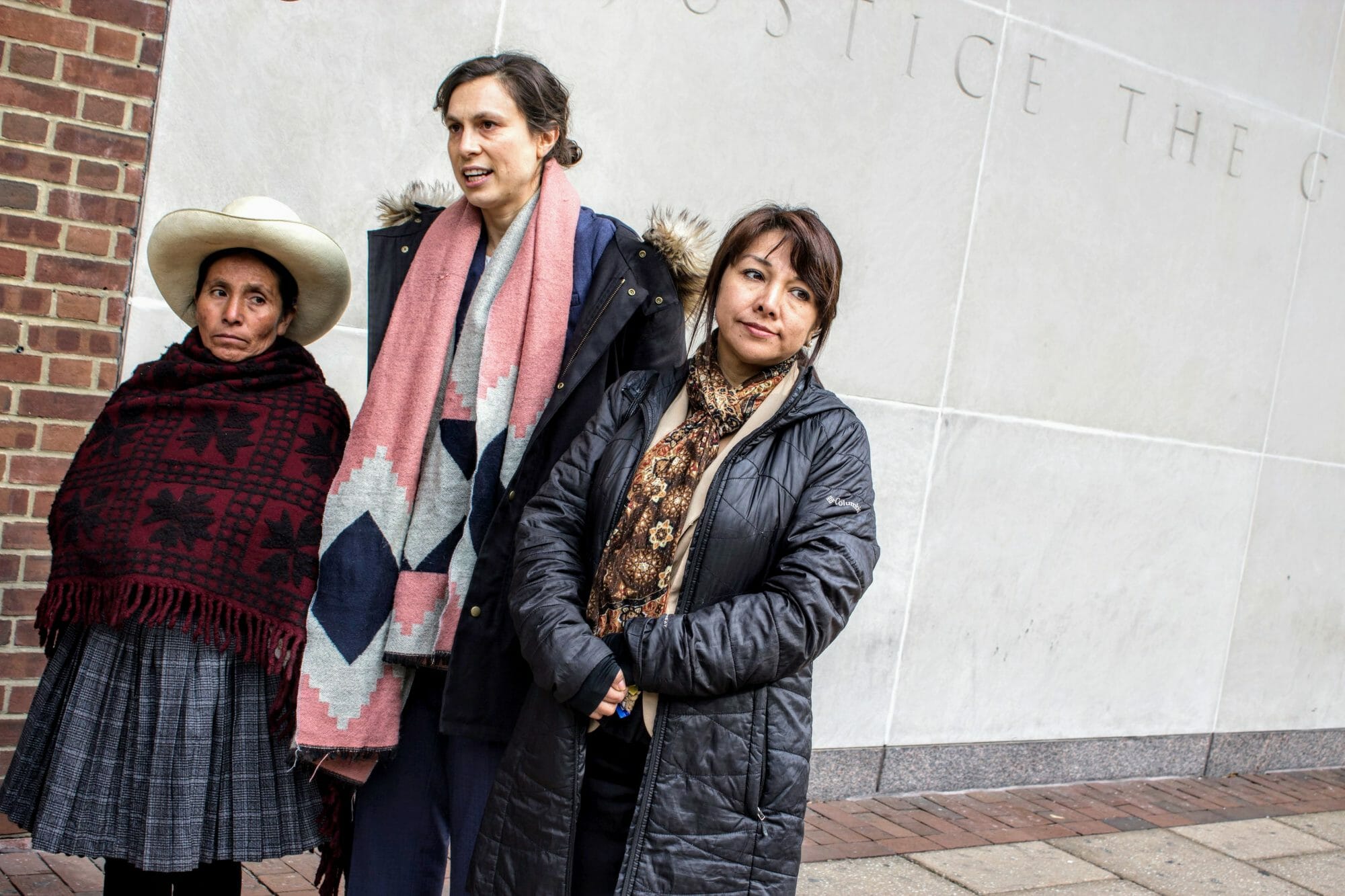 In February, ERI’s lawyers had an oral argument in front of a U.S. Federal Court in Goldman Environmental Prize winner Máxima Acuña’s case against mining giant Newmont. For over six years, Newmont has led a campaign of harassment and abuse against the family intended to force them off their land and pave the way for a new open-pit gold mine in Peru, which would be one of the largest in Latin America. The Chaupes filed a civil lawsuit in 2017. The lawsuit seeks to stop the physical and psychological abuse that the Chaupe family has suffered at the hands of security personnel working for Newmont and its corporate affiliates. From left: Máxima Acuña with Marissa Vahlsing, Supervising Attorney at EarthRights International, and Mirtha Vasquez, lawyer at Grufides, in front of the court before the oral argument. 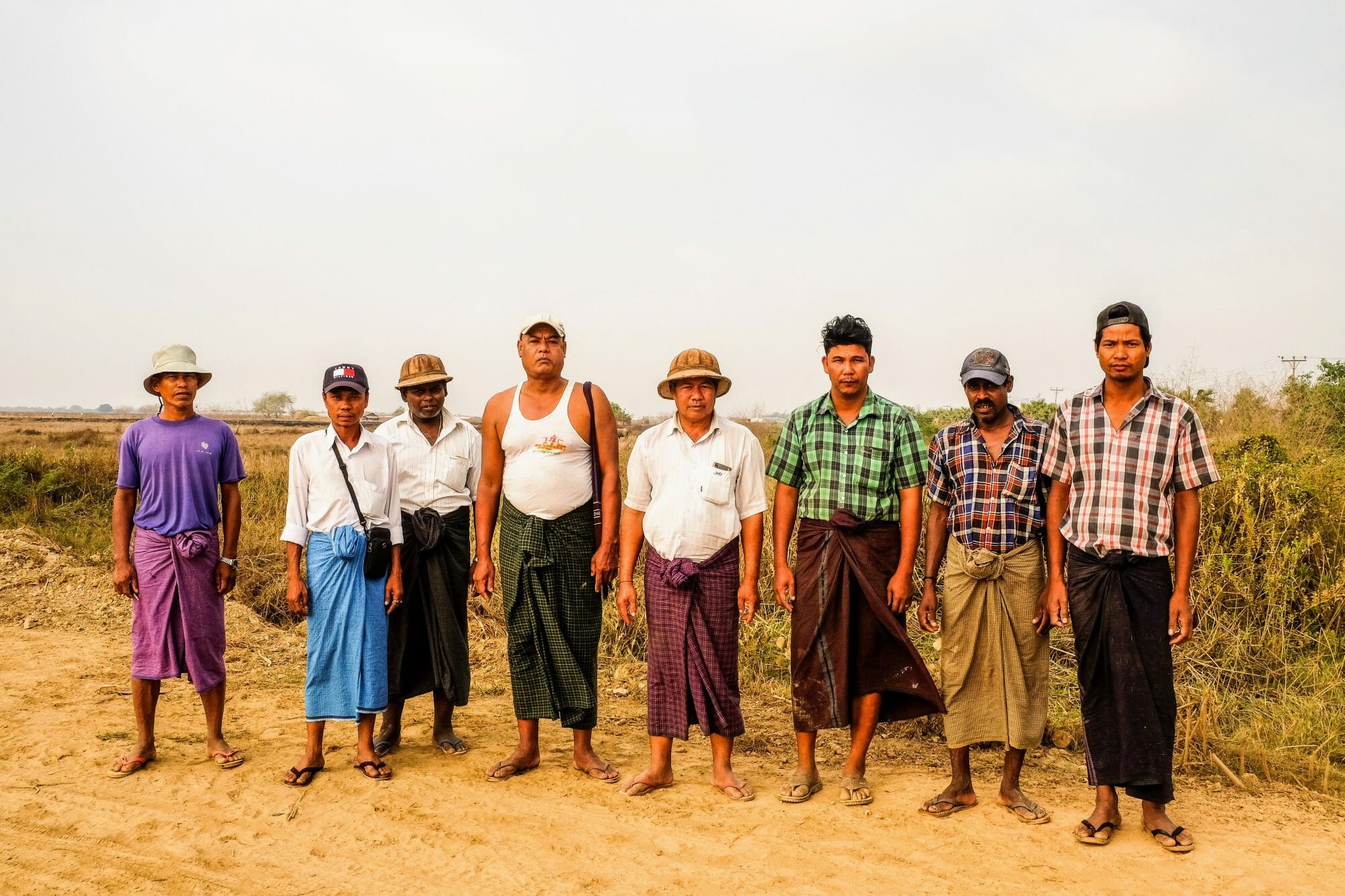 In March, we went to court with 33 farmers in Myanmar to argue that they should be acquitted of criminal trespass charges. The 33 farmers have struggled to hold onto their land in Thida Myaing Village, near Thilawa Special Economic Zone (SEZ), for over two decades and as a result were charged with criminal trespass. EarthRights International (ERI) works with communities affected by the Thilawa SEZ and in surrounding areas and has been supporting these 33 farmers. After a trial lasting more than 3 years, a Myanmar court found 33 farmers guilty of criminal trespass charges brought against the farmers as a result of their efforts to defend their land rights. 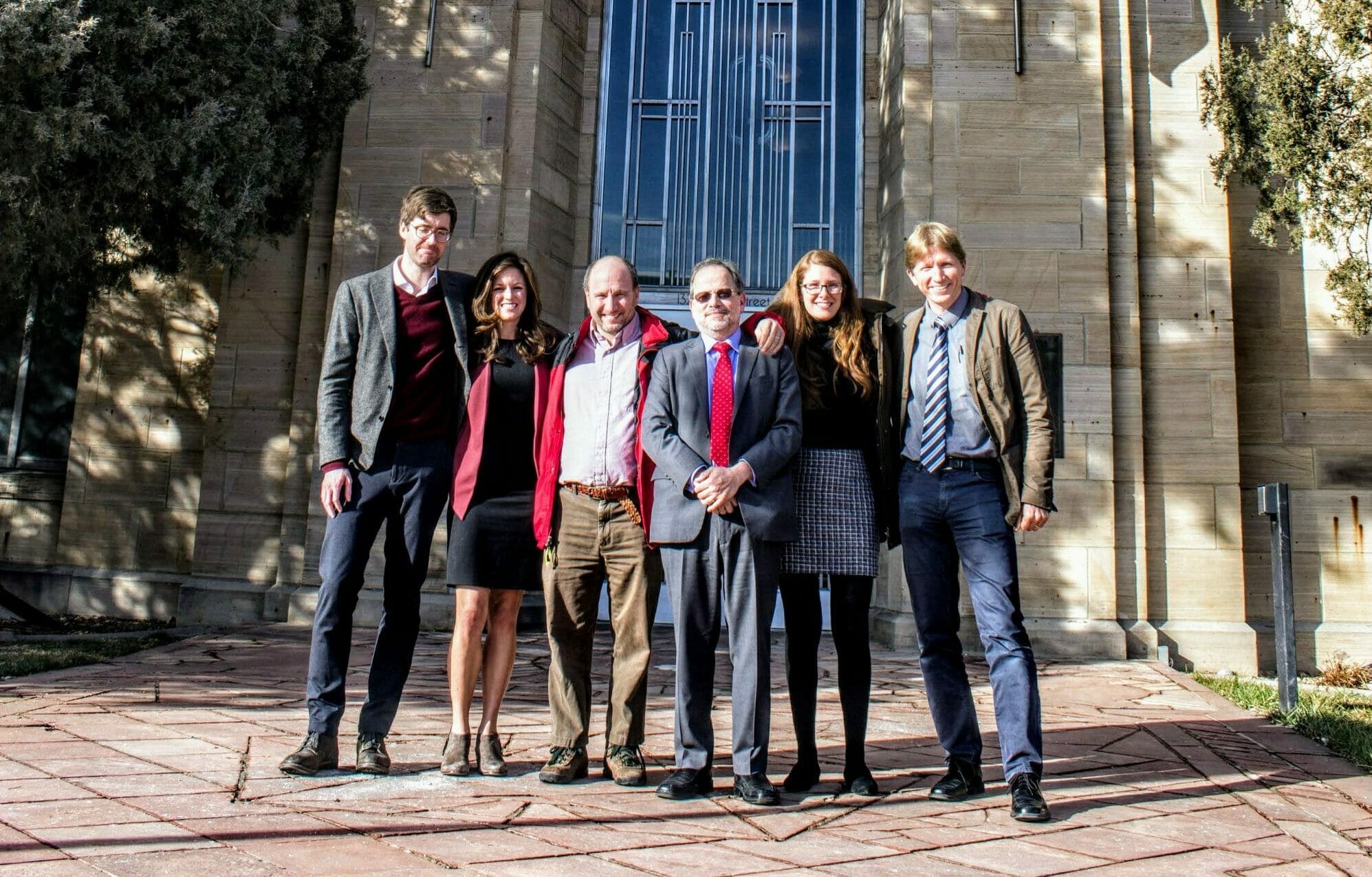 In April, together with the Colorado communities of Boulder County, San Miguel County, and the City of Boulder, we filed a lawsuit against Suncor and ExxonMobil, two oil companies with significant responsibility for climate change. The communities have demanded that these companies pay their fair share of the costs associated with climate change impacts so that the costs do not fall disproportionately on taxpayers. From left: ERI Staff Attorneys Sean Powers and Michelle Harrison, ERI Senior Litigation Attorney Rick Herz, David Bookbinder from the Niskanen Center, former Bertha Justice Fellow Ali Borochoff-Porte, and ERI General Counsel Marco Simons, who all worked on this case, stand together in front of Boulder, Colorado’s courthouse. 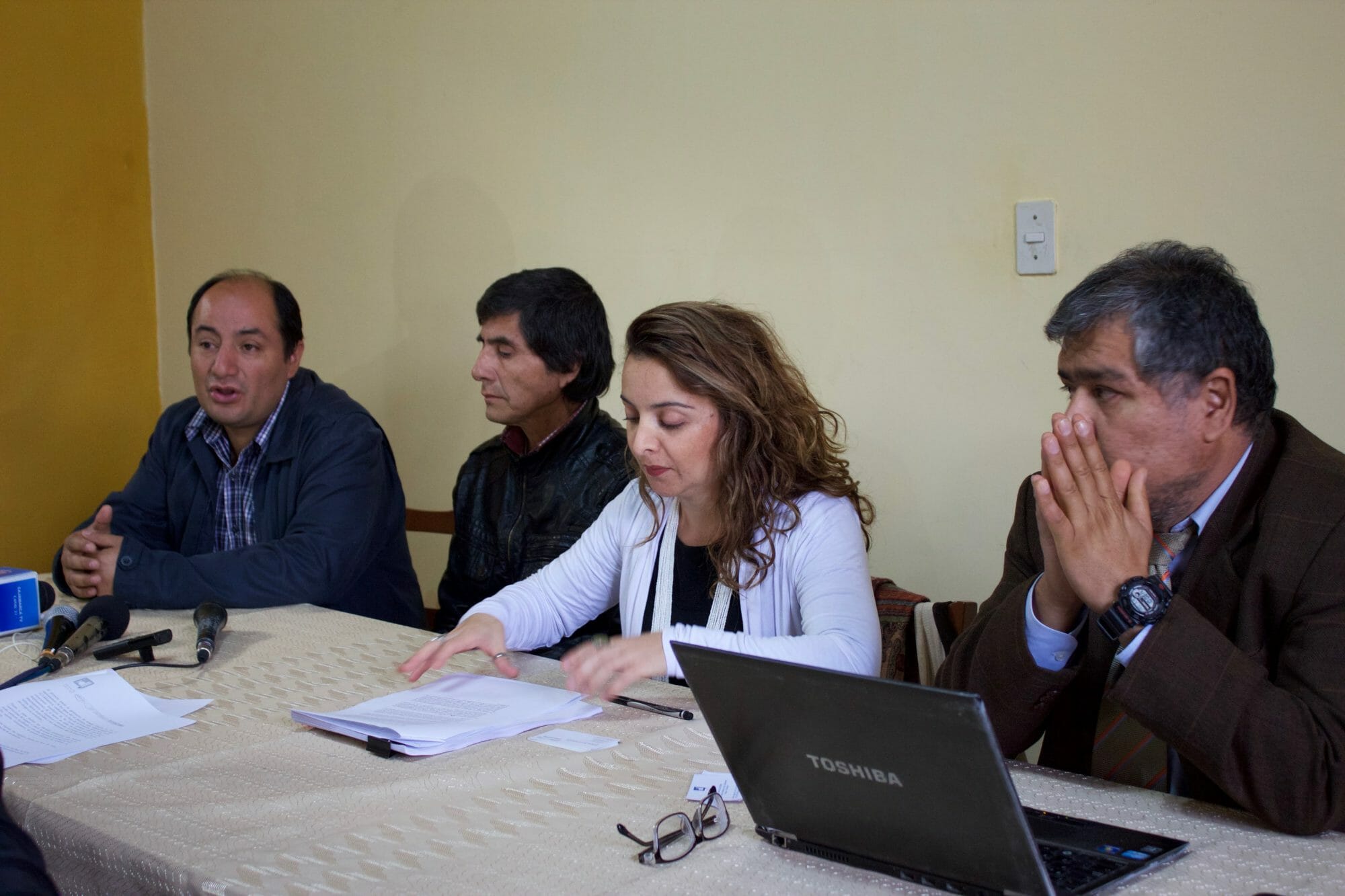 In May, together with their lawyers from EarthRights International and Instituto de Defensa Legal, communities affected by the Chadín 2 Hydroelectric Project filed a lawsuit for recognition of rights of the Marañon River in Peru. The constitutional request asks to guarantee their fundamental rights through the protection of the Marañón River and its rich biodiversity, declaring its Environmental Impact Assessment (EIA) invalid. The project will create energy by damming the waters of the Marañón River, whose reservoir will have an area of 32.5 square kilometers and will flood the surrounding lands. This would displace at least 1,000 people living in Cajamarca and Amazonas, resulting in the irreparable damage to their ecosystem. In this photo, Juliana Bravo, ERI’s Amazon Program Director, leads a press conference in Peru announcing the filing of the lawsuit for recognition of the rights of the Marañon River. 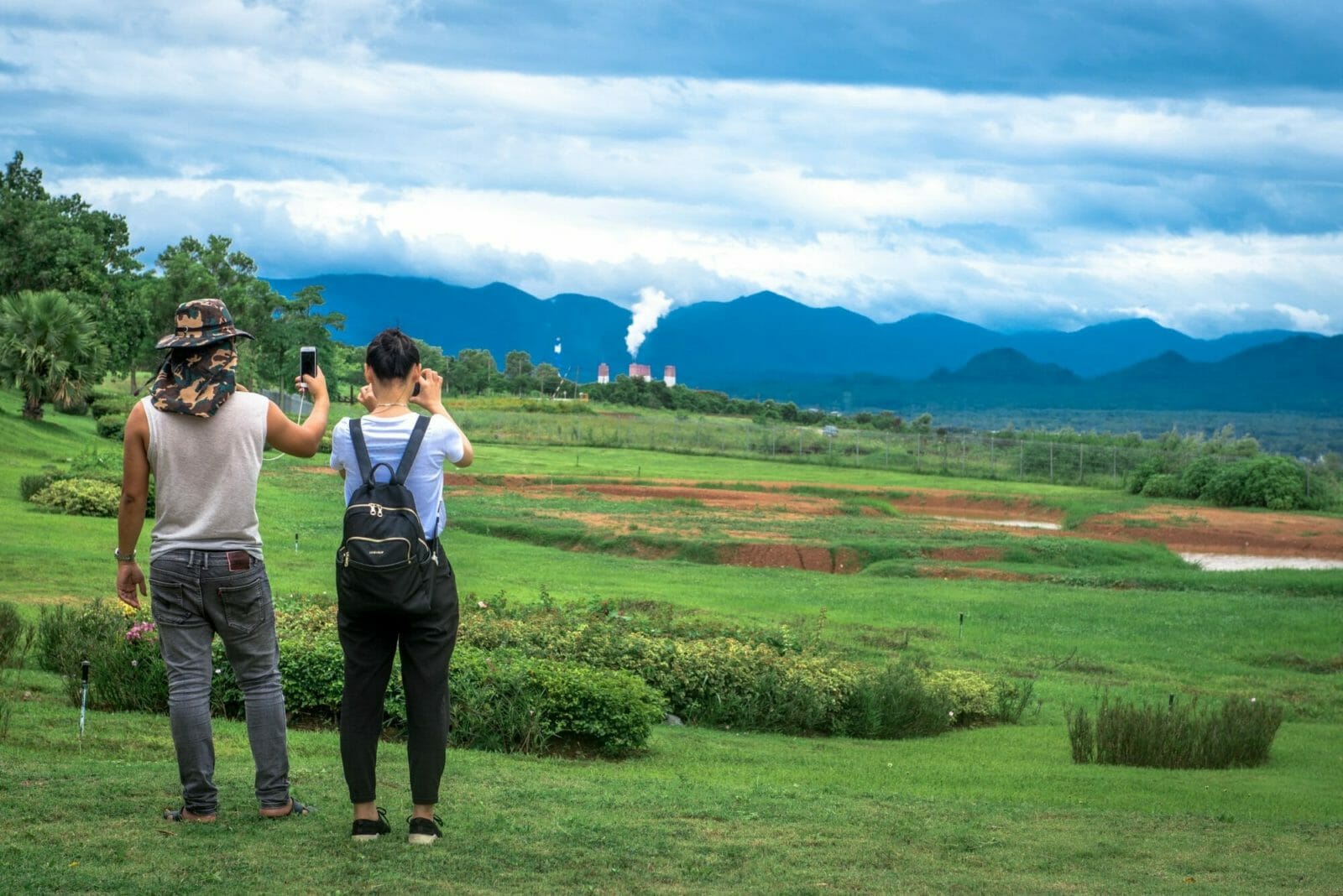 In June, EarthRights School students visited the largest coal-fired power plant in Thailand – the 2,400 MW Mae Moh power plant – and the nearby lignite coal mine. Students learned from Maliwan Nakwirot, a community leader who has fought to protect her community from the impacts of the power plant and the nearby lignite mine. As pollution has led to over 300 deaths and caused respiratory problems for thousands, she has led her community to demand remedies and justice. 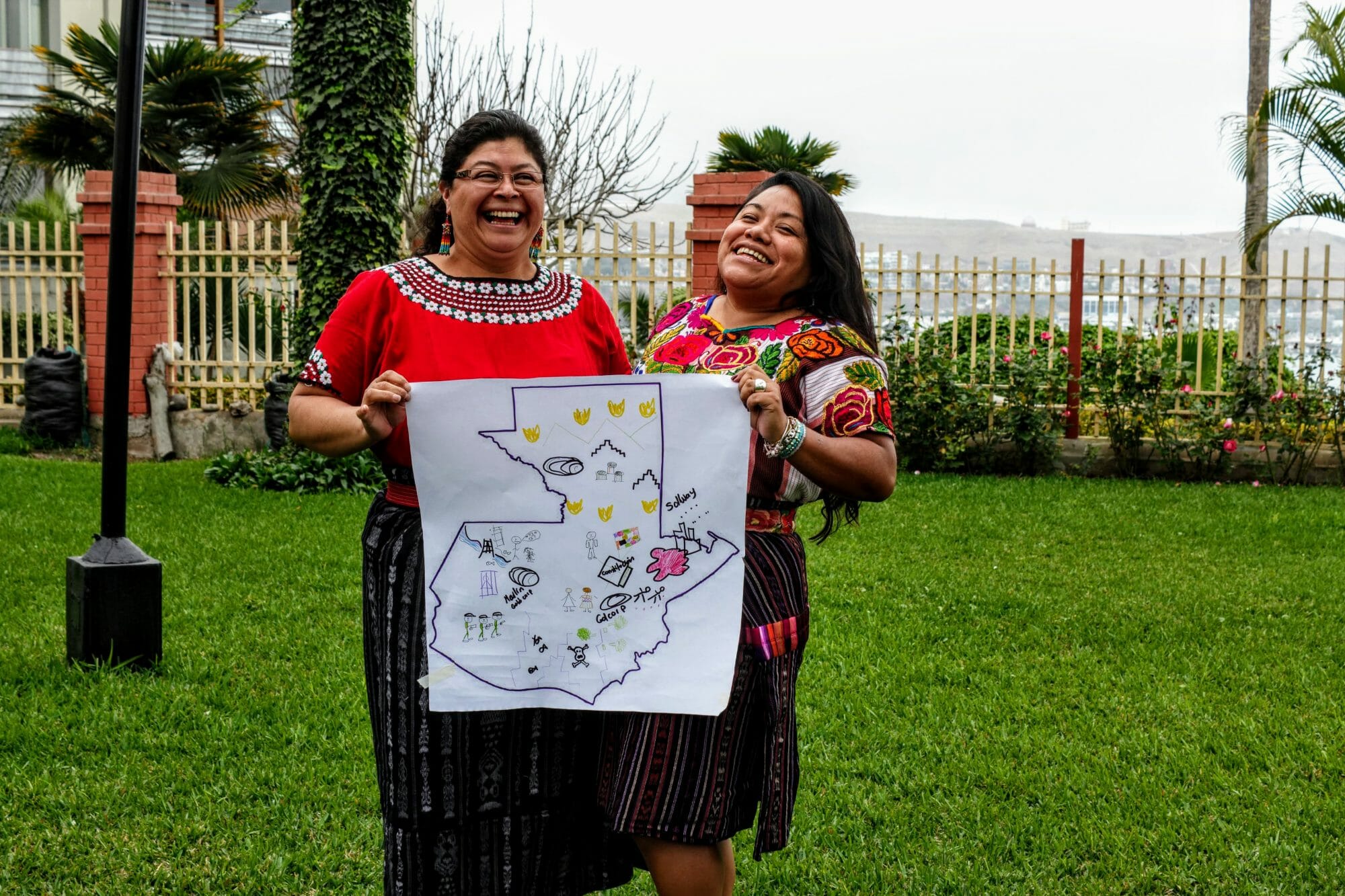 August was a busy month! In the beginning of the month, we hosted our third Latin American Seminar on Indigenous Legal Defense in Peru. This seminar brings together indigenous lawyers and legal advocates from places and contexts across Latin America: Embera, U’wa, and Kankuamo from Colombia, Quechuas, Aymaras, Wampis from Peru, Siona from Ecuador, Mapuche from Chile, and more. Together, they learn and gain skills from each other and other experts in the field. In this exercise the participants identified the most common challenges in their countries, such as the criminalization of earth rights defenders, the lack of prior consultation regarding decisions that affect them, the lack of recognition of their ancestral territories, the negation of their worldview and cosmovision, environmental pollution, violence against indigenous women, and many more. 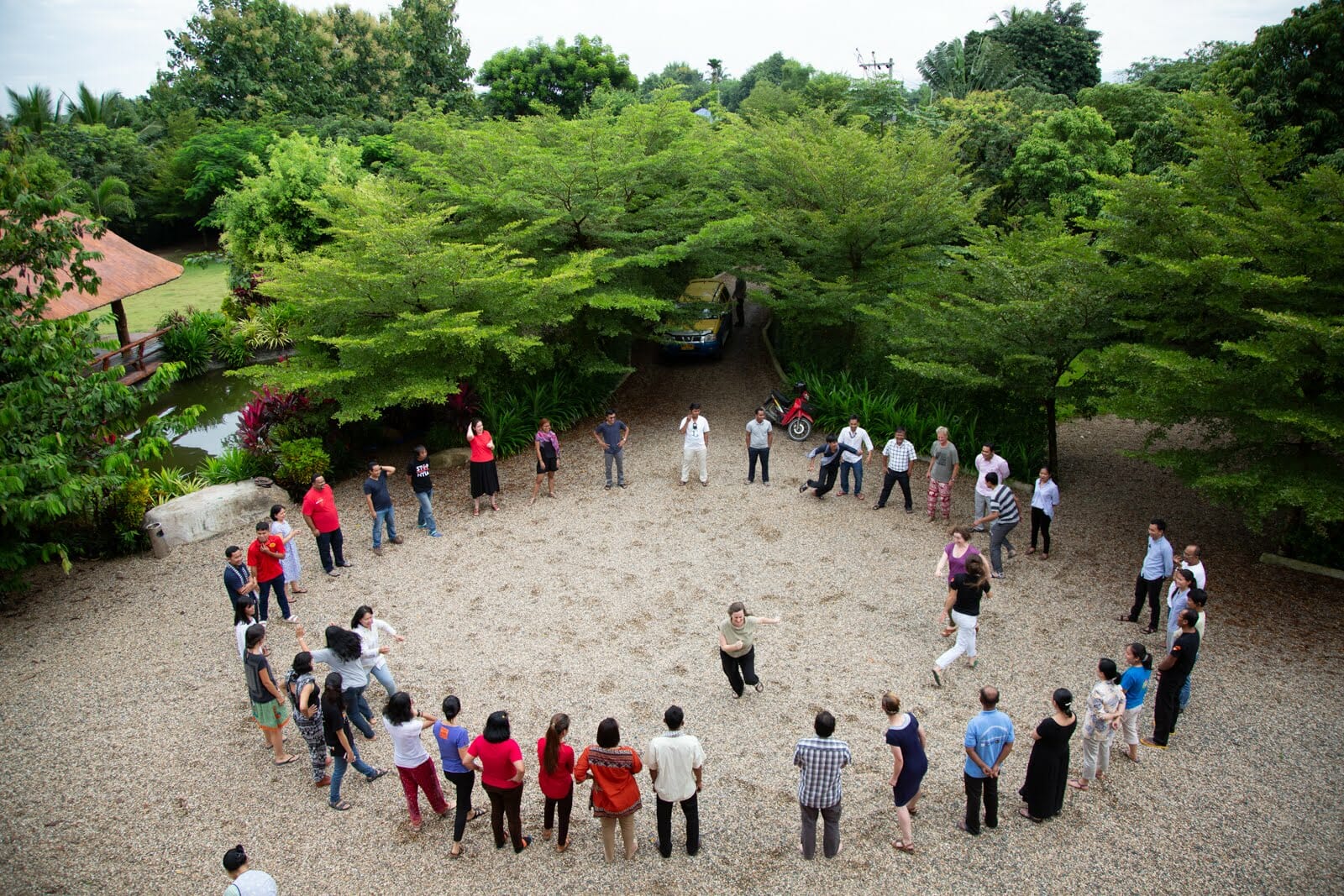 In late August, the Forest Defenders Conference brought together 50 human and environmental rights activists from 10 countries, most in Southeast Asia, to develop strategies to protect and promote the vital work of earth rights defenders. The conference was organized by EarthRights International, Not1More, and Cambodian Youth Network. The Forest Defenders Conference is part of our work to support earth rights defenders. 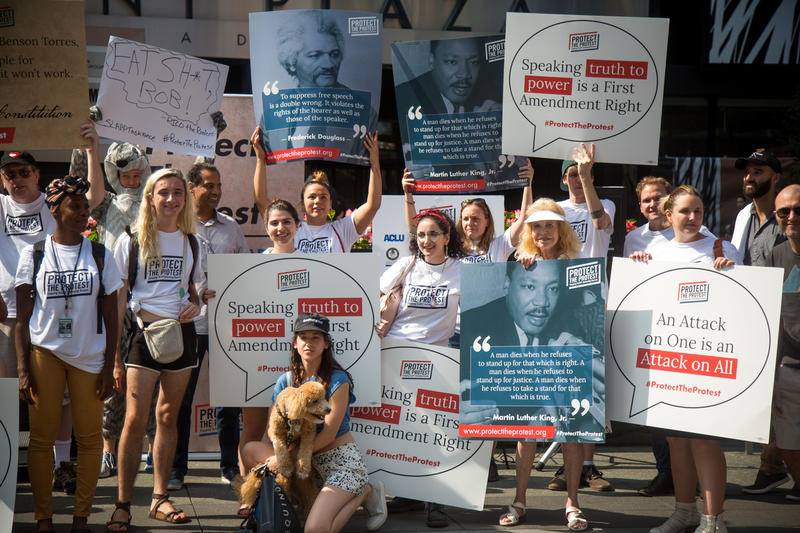 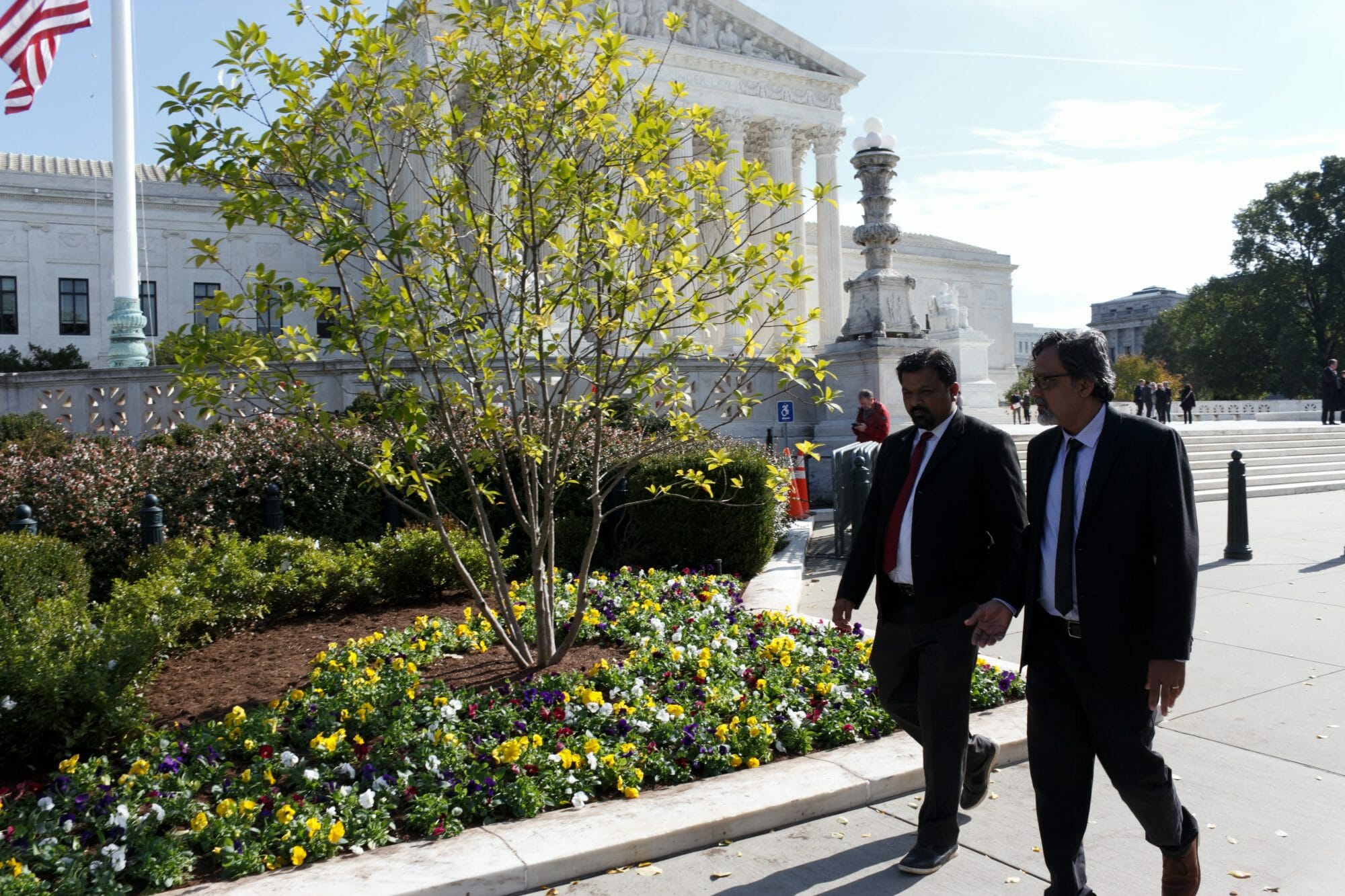 The U.S. Supreme Court heard oral arguments in our case, Jam v. International Finance Corporation (IFC), a landmark lawsuit that will decide if international organizations are absolutely immune from lawsuits in U.S. courts. International organizations like the IFC – the private lending arm of the World Bank Group – have long claimed they are entitled to “absolute” immunity, no matter how illegal their actions or how much harm they cause, in the U.S. or elsewhere. We were joined by Joe Athialy, Executive Director at the Centre for Financial Accountability, and Bharat Patel, a Plaintiff in the case. 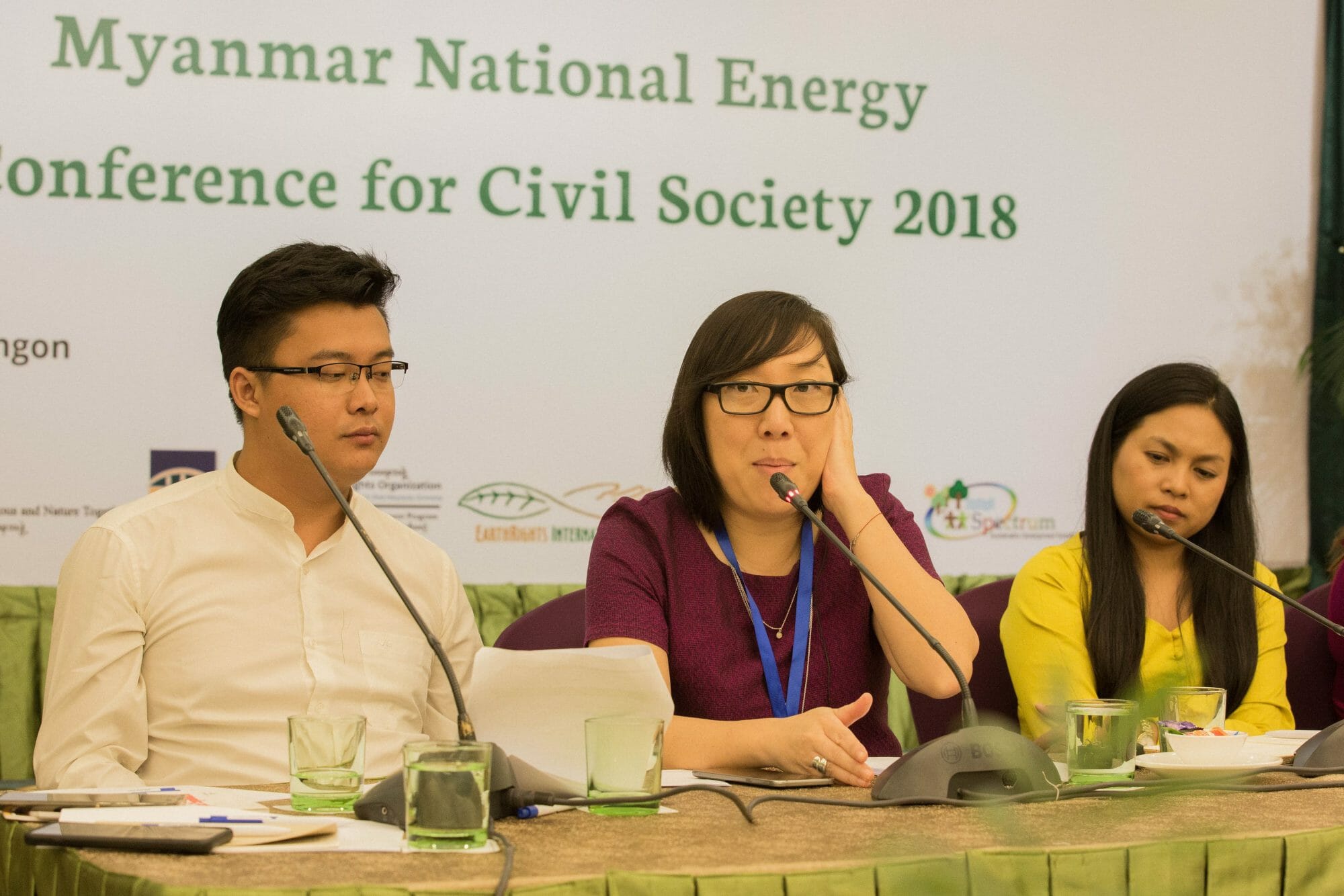 We co-hosted the first Myanmar National Energy Conference (MNEC) in Yangon, Myanmar. This was the first energy conference to exclusively bring together civil society representatives from each state and region working on energy issues to discuss the current situation of national energy planning in Myanmar. Myanmar is currently the third most vulnerable country to the effects of climate change. This conference was a successful first step toward providing a platform for communities to raise their voices to be included in the national energy planning for the country. ERI’s former Myanmar Campaign Coordinator speaks on the panel. 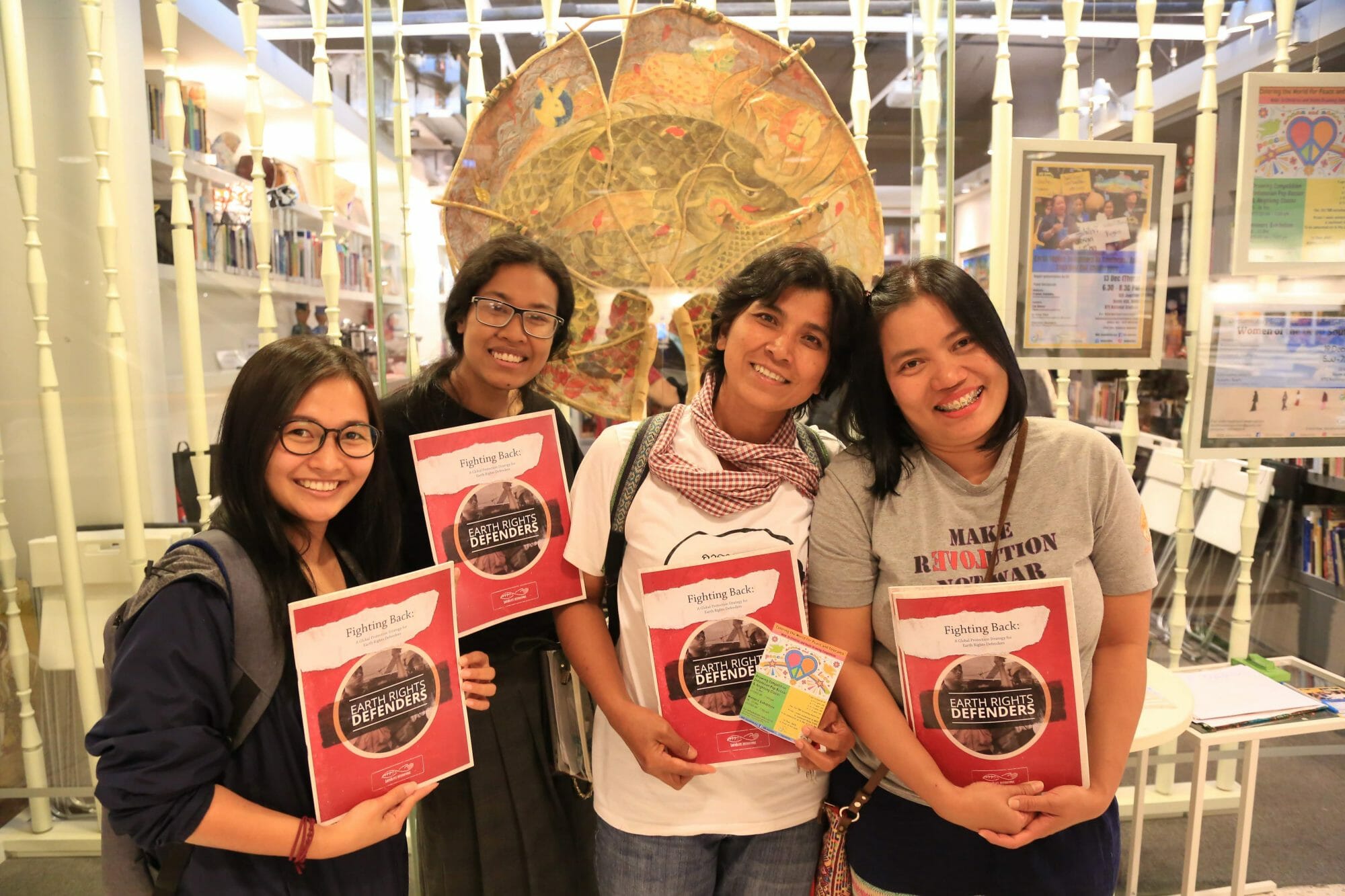 In December we launched our long awaited action plan and interactive web platform titled Fighting Back: A Global Protection Strategy for Earth Rights Defenders. We held events in Washington D.C. and Bangkok to lay out a roadmap to protect the rights of earth rights defenders so that they can continue their important work of protecting our planet. Our work around earth rights defenders will continue to intensify in 2019 as global systems for exploiting natural resources continue to be designed to make profit, not to respect the rights of local communities.