Home   »   Publications   »   “There is no benefit, they destroyed our farmland”

“There is no benefit, they destroyed our farmland”

The Shwe natural gas project and the Myanmar-China oil transport project, commonly referred to as the “Myanmar-China Pipelines” or “Shwe Pipelines” are two of Myanmar’s largest energy projects that include offshore platforms, offshore and onshore pipelines, and onshore terminals, deep sea ports and storage and processing facilities.  The pipelines will transport Myanmar’s gas from blocks A-1 and A-3 in the Bay of Bengal and oil from the Middle East and Africa through Myanmar to China.  The pipelines will traverse sensitive marine ecosystems, dense mountain ranges, arid plains, rivers, jungles, villages and towns populated by ethnic Myanmar people and several ethnic nationalities along the pipeline’s path from Rakhine State through Magway and Mandalay Divisions, and northeast through northern Shan State to Yunnan, China.  Resources transported through these pipelines will benefit consumers and industry in Yunnan and other western provinces in China and will supply the Myanmar government with multi-billion dollar revenues; little gas and no oil will be directed for domestic consumption in Myanmar. The Chinese National Petroleum Corporation (CNPC), the operator of the pipelines, recently stated that the projects could begin operating in early June, 2013. With significant work remaining, particularly in areas in northern Shan State where attacks against ethnic armed groups by the Myanmar military continues and in several locations where the pipeline has yet to be laid, it is likely that operations will be delayed until later in 2013 or beyond.

Communities and individuals interviewed by EarthRights International (ERI) in the project areas are overwhelmingly opposed to the pipeline projects and ERI, other groups, and individuals monitoring the projects have identified multiple adverse human rights and environmental impacts of the pipelines. This update, drawn from interviews with affected villagers, multiple investigations inside Myanmar, communications with companies operating the oil and gas projects, and public documents, illustrates several examples of the negative impacts of the Myanmar-China pipeline projects in western and central Myanmar.

This periodic update is limited in scope to provide a snapshot of overall project development.  However, other impacts have been documented along the pipeline route, including environmental harms, lack of local benefits, and human rights violations, including severe human impacts in northern Shan State.  While EarthRights International has not conducted field investigations in northern Shan State, the pipelines are increasing tensions as construction reaches the Chinese border where there is renewed armed conflict between the Myanmar Army and several ethnic armed groups. Reports on these subjects are available through the internet links accompanying this report.

EarthRights International’s aim in releasing this update is to provide information to local communities and civil society in Myanmar while also alerting companies and stakeholders of local perceptions and impacts of ongoing construction.  Prior to publication, EarthRights received responses from Daewoo International Corporation (Daewoo International) and South-East Asia Gas Pipeline, Co, Ltd. (SEAGP), controlled by the Chinese National Petroleum Corporation, regarding impacts reported by locally affected individuals.  EarthRights has incorporated their official company responses into this publication.

The Myanmar-China pipelines comprise three separate projects: 1) offshore natural gas drilling platforms in the Bay of Bengal to extract gas from the Shwe fields, offshore natural gas pipelines, and an onshore natural gas terminal; 2) an onshore natural gas pipeline; and 3) onshore deepwater port and oil storage facility and onshore oil transport pipeline. Each project has distinct contracts and ownership structures.  The Shwe natural gas field consists of three independent gas discoveries, the Shwe, Shwe Phyu, and Mya fields, and is situated in petroleum blocks A-1 and A-3 located off of Myanmar’s Rakhine coast. Daewoo International, a subsidiary of South Korean conglomerate, POSCO, is the majority owner and operator of both the A-1 and A-3 blocks.  Daewoo International also has a number of minority partners, including the state-owned Myanma Oil and Gas Enterprise (MOGE), Korean Gas Corporation (KOGAS) (Korean state owned), ONG Videsh (India), and GAIL (India)  which exercised its right to assume 15% ownership in the project.  This consortium will operate an 80km (110mi) offshore pipeline constructed by South Korea’s Hyundai Heavy Industries (HHI) at a construction cost of US$1.4 billion.  The pipeline is scheduled for completion in 2013 and will provide China 6.5 trillion cubic feet (tcf) of natural gas over the next 30 years.

The onshore section of the Shwe gas pipeline commences at the Onshore Gas Terminal (OGT) and will extend 793km (492mi) to Myanmar’s border with China’s Yunnan province. The Hong Kong-registered entity SEAGP, created by the China National Petroleum Corporation (CNPC) and the Shwe Consortium members listed aboveare responsible for construct and operate the onshore pipeline.  This pipeline was also scheduled for completion in March 2013 at a cost of US$1.04 billion.  A crude oil pipeline will run parallel to the natural gas pipeline for virtually the entire distance across Myanmar, along with supplementary road and proposed rail projects connecting Kyauk Phyu to Ruili in Yunnan Province, to transport oil from the Middle East and Africa to southwestern China. The oil pipeline project is operated by the Hong Kong registered South-East Asia Oil Pipeline Company (SEAOP), with CNPC controlling 50.9% of the company, and MOGE controlling the remaining 49.1%. According to a 2009 agreement between CNPC and Myanmar government, CNPC is responsible for project construction and operation through the granting of an operating concession, while the Myanmar government is responsible for security.[1] The project also involves construction of a new deepwater crude unloading port and oil storage facility on Myanmar’s Maday Island.  CNPC will own a 50.9% stake in the oil pipeline through a wholly owned subsidy with the remaining 49.1% controlled by MOGE.

Impacts in Rakhine State, and Magway and Mandalay Divisions

The Myanmar-China pipelines have created multiple adverse impacts on the lives and livelihoods of local communities in western and central Myanmar.  Villagers have reported cases of local government and military profiteering and corruption, land confiscations without compensation or adequate compensation, damage to farmers and community land resulting from project-related activities, and damage to fishing areas. Construction projects have restricted local mobility either in terms of blocked traditional routes or inadequate repair of major roads.  Interviews with local communities have underlined the project’s lack of transparency when explaining compensation schemes and anticipated impacts to citizens.  Local citizens have reported instances of the company’s corporate philanthropy programs failing to meet local needs and standards.

EarthRights International has documented a pattern of land abuse cases related to the oil and gas projects resulting from military profiteering, the failure to pay compensation for confiscated land, and the outright damage or destruction of farming and community land. Additional cases of corruption involving land compensation have been reported involving the Myanma Oil and Gas Enterprise (MOGE). These land rights abuses are having a severe impact on local communities ability to maintain their lifestyle and are endangering food security for affected families. EarthRights International has made an effort to separate impacts into distinct categories to assist readers.

In response to an inquiry by EarthRights, Daewoo International disclosed its land acquisition policy, in English. Daewoo International did not produce a Myanmar language version but the company claimed their policy was disclosed and discussed with local communities.[2] To benefit local communities’ understanding of Daewoo’s land acquisition policy, EarthRights international has produced a Myanmar language translation. 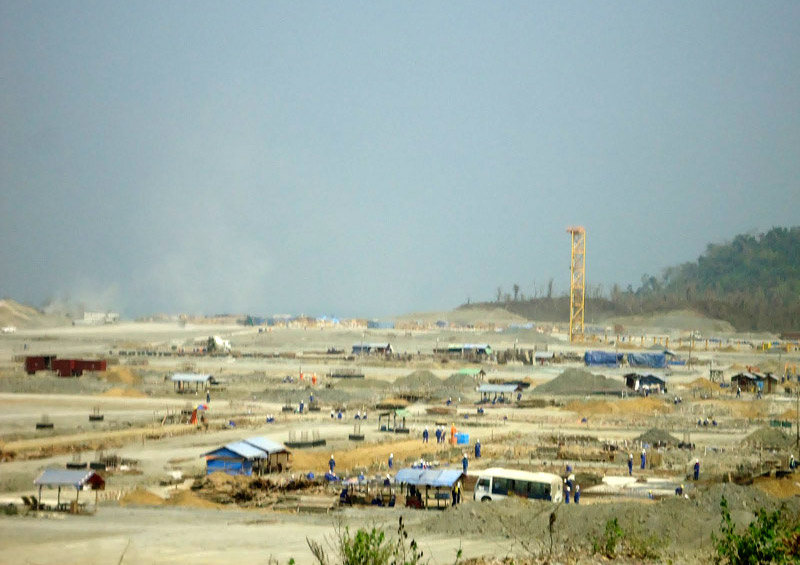 The Myanmar government and companies involved in construction along the pipeline corridor have failed to adequately explain land confiscation processes.  On multiple occasions, villagers reported to EarthRights International that they do not understand how compensation payments are calculated, the duration of construction on their land before it is returned to them, or why some parts of their land were worth less than comparable tracts of land elsewhere in their village.  Responses from Daewoo International and SEAGP both state that compensation methodology is stated in advance[27], but evidence shows that their message has not resonated with villagers.  The lack of transparency surrounding compensation payments also extends to the lack of disclosure of other critical pieces of information, including environmental impact assessments, social impact assessments, and human impact assessments. 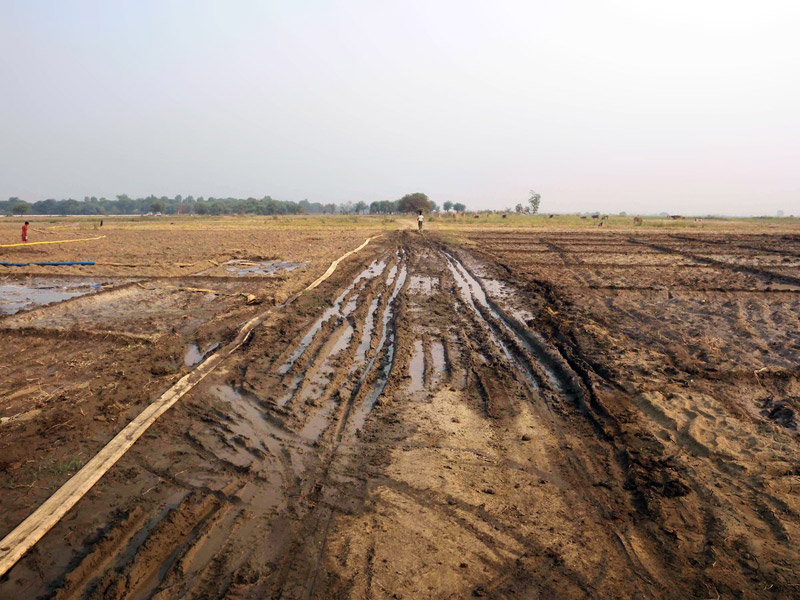 Construction along the pipeline corridor has restricted local mobility in the form of security checkpoints, damage to local roads from construction vehicles, and haphazard burial of pipelines under roads.  Impacts to transit areas can impose a financial burden on citizens, increase transportation times, and even threaten villagers’ safety.  Daewoo International and SEAGP have acknowledged the damage caused to local roads and are working to repair damage, but upgrades are not keeping pace with damages.

Since 2006, Daewoo International has supported corporate philanthropy programs both around their project area as well as in other areas of Myanmar focused on education, healthcare, and water sanitation. More recently, CNPC has begun providing donations of money for health clinics and schools. Despite these donations, information received by EarthRights International and others indicates significant shortcomings in these philanthropic programs. As reported in 2011, forced labor was connected to a 2009 Daewoo International funded health clinic in central Myanmar.[37] VIllagers have also claimed that donated facilities are only provided to villages located close to main roads and areas more likely to be seen by outsiders to demonstrate corporate philanthropy, and other communities impacted by the projects in more remote areas have received little to no corporate donations.

There is no benefit the Ka Lar [India company] and Chinese companies do for our village. Those companies are working in this area, and our local people lose many things. They destroyed our farmland. You will see the schools from Gone Chwein village, Pjain Sei Kay, Kan De villages which are donated by the Shwe company. They donated to those villages because those villages are along the highway from Yangon to Kyauk Phyu town. If the government leaders come to Kyauk Phyu, they will see those donated schools. Our village is far from the high way. Nobody sees our village.[42]

There are about 150 households in our village. There is a small clinic in our village which are opened by Danyawady Navel Base military camp. The companies do not donate anything for us. We faced many problems because of those companies. They donated a little bit to some villages which are situated on the road. We have a  government primary school. The children have to go Thake Pot Taung village to attend the middle school.[43]

To Companies Participating in the Myanmar-China Pipeline Projects

To the Myanmar Authorities