Kiobel v. Royal Dutch Petroleum (Shell) is an Alien Tort Statute (ATS) case brought by Nigerians from the Ogoni community who suffered abuses in 1993-1995, when the Movement for the Survival of the Ogoni People (MOSOP) and other Ogoni groups demanded an end to destructive oil development in their region and were meant with a violent military crackdown.  Kiobel is a companion to Wiwa v. Royal Dutch Petroleum, which settled in 2009 and in which ERI served as counsel, and arises out of some of the same events.

In 2006, the trial court judge in the Kiobel case issued a decision finding that the plaintiffs could not bring claims for summary execution, but that Shell could be sued for aiding and abetting other human rights abuses.  The judge authorized an unusual “interlocutory” appeal, in which issues are presented to the Court of Appeals before the case has concluded in the trial court.  Both sides appealed; the plaintiffs challenged the summary execution ruling, and Shell challenged the aiding and abetting ruling.  (The trial court judge subsequently reversed her views on summary execution in a ruling in the Wiwa case, allowing the Wiwa plaintiffs’ claims to proceed.)

In 2007, ERI and its co-counsel in the Wiwa case filed two amicus briefs to the Second Circuit Court of Appeals, supporting the plaintiffs’ appeal on the summary execution issue, and opposing Shell’s cross-appeal on the aiding and abetting issue.  Two groups of international law scholars also filed amicus briefs in the cross-appeal, supporting the plaintiffs’ claims of crimes against humanity, arbitrary detention, and cruel, inhuman or degrading treatment.  The case was argued to the Second Circuit in January 2009.

In September 2010, the Second Circuit issued a surprising decision.  Instead of ruling on any of the issues that had been briefed and argued, the Court of Appeals decided that the case had to be dismissed because, it found, corporations could not be sued for human rights violations under the ATS.

In October 2010, the plaintiffs submitted a petition for rehearing, and ERI submitted an amicus brief in support of rehearing.  ERI’s brief was submitted on behalf of major human rights and labor groups, including Human Rights Watch, the largest human rights organization in the U.S., and two of the largest unions in the U.S., the Service Employees International Union and the United Steel Workers, as well as the Center for Constitutional Rights, Global Witness, the International Labor Rights Forum, the World Organization for Human Rights USA, the Human Rights Law Foundation, and Accountability Counsel.  The brief argues that the Kiobel decision wrongly relies on the fact that corporations cannot be brought before any international tribunal to conclude that corporations are not subject to international law.  Because the ATS is a domestic remedy for violations of international law, and because international law has always primarily been enforced through domestic mechanisms, it makes no sense to limit the enforcement of international law to the few areas in which international tribunals have been created.

Six other amicus briefs were filed supporting rehearing, including briefs on behalf of international law scholars, scholars of the Holocaust and the Nuremburg trials, legal historians, federal jurisdiction professors, victims of terrorism, and the Public Good Law Center. The judges that decided Kiobel rejected all of the amicus briefs, and ERI and the other amici then filed a motion asking the full court to reconsider whether the amicus briefs should be filed. Ultimately, the judges of the Second Circuit split evenly on whether to rehear the case, leaving the decision standing.

The plaintiffs next petitioned the US Supreme Court and, on February 28, 2012, the Supreme Court heard arguments in the Kiobel case, which will ultimately decide whether corporations – like human beings – can be sued for their participation in gross human rights abuses, or whether they enjoy a unique immunity from liability.

On March 5, 2012, the Supreme Court ordered the case to be re-briefed in order to be re-argued in the fall of 2012. The rebriefing and reargument was not about whether corporations could be sued, but instead was about the extent to which the ATS applies to abuses that occur overseas. The Supreme Court ultimately held that the ATS does not provide an avenue for justice for Nigerian human rights victims who sued a British and Dutch corporation for assisting the Nigerian government in committing abuses in Nigeria, since the claims did not “touch and concern” the United States “with sufficient force.” Lower courts’ interpretations of the Kiobel decision have been mixed. 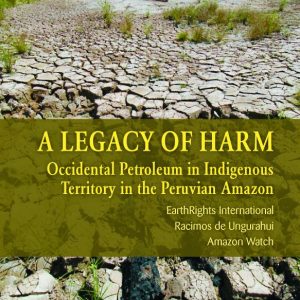 A Legacy of Harm