On July 1, 2011, EarthRights International filed a friend of the court brief in the U.S. Court of Appeals for the Ninth Circuit in support of corporate liability for complicity in violations of international law, in a case where children allege that they performed slave labor on cocoa plantations that supply chocolate to Nestle and other companies.

In 2005, three Malian children who allegedly performed slave labor on plantations in the Ivory Coast sued Nestle in federal district court in Los Angeles. Nestle purchased cocoa from the plantations where the children allegedly worked 12 to 14 hour days with no pay, were routinely beaten and whipped, and were threatened with guns. The suit alleged that Nestle was well aware of the conditions on the plantations but, nevertheless, prioritized the bottom line and bought the cheaper cocoa, arguing that Nestle was liable for violations of international law under the U.S. Alien Tort Statute (ATS). However, the District Court for the Central District of California dismissed the suit in September 2010, finding that corporations cannot be held liable for violations of international law. The plaintiffs appealed to the U.S. Court of Appeals.

ERI’s amicus brief to the Ninth Circuit supports the children’s claims, and presents arguments about corporate liability and liability for aiding and abetting abuses that ERI has previously made in several other amicus briefs. First, ERI’s brief argues that issues of corporate complicity in ATS cases should be governed by the same common-law rules that generally govern cases in US courts; special rules of corporate immunity should not be created in cases of serious human rights abuses. Second, the brief suggests that defendants should be held liable when they knowingly provide substantial assistance to perpetrators in the commission of human rights abuses. Finally, the brief argues that the corporations should be held liable under the ATS on the same basis as any person; indeed, corporations are often given constitutional rights, and nothing in international law suggests corporate immunity.

Plaintiffs also received three amicus briefs in addition to that from ERI:

The defendants also received amicus briefs from the U.S. Chamber of Commerce, the National Association of Manufacturers, and the U.S. Council for International Business. All of the amicus briefs, as well as the parties’ briefs, the First Amended Complaint and the district court order dismissing the case are attached below. 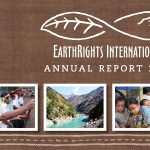