2 February, 2018 – Srekor village in Stung Treng, Cambodia, has now been fully submerged by the rising floodwaters of the Lower Sesan 2 Dam. The village remains only in name. According to local villagers, the entire area is now underwater, including homes, farms, temples, fishing grounds, riverbank gardens, and ancestral graves. The flood zone includes approximately 2 square km of farmland behind the village that is used by the few remaining villagers to grow rice and other crops. The submerged area also includes a historic site where local residents organized ceremonies, asking for blessings before the harvest and when going out to fish. The Buddhist temple is underwater, as well as the carefully tended riverbank gardens, where local women grew herbs and vegetables such as long beans as an important source of food.

Cambodian Prime Minister Hun Sen presided over the inauguration of the Lower Sesan 2 Dam in September 2017. According to local residents, the flood level in Srekor village has reached 6-7 meters since the dam began operating in November. Close to five thousand people, from indigenous Bunong, Lao and ethnic Khmer communities, have been resettled to make way for the dam’s reservoir. Approximately 63 families, committed to protecting their land and ancestral graves, have moved to a community forest located one kilometer away, where they hope to secure the legal right to remain. Representatives of the remaining families have sought to negotiate with the government and the project developers – China’s Hydrolancang International and Cambodia’s Royal Group – seeking compensation for lost homes, property, gardens, and farmlands, and the cost of relocating to new land that they claim is less fertile than that in their old village.

In the face of increasing pressure, an additional 10 Srekor families relocated to the new resettlement village provided by the project developers between December 2017 and January 2018. At the new resettlement site, residents have reported numerous issues, including poor water quality and the financial burden of purchasing drinking water. 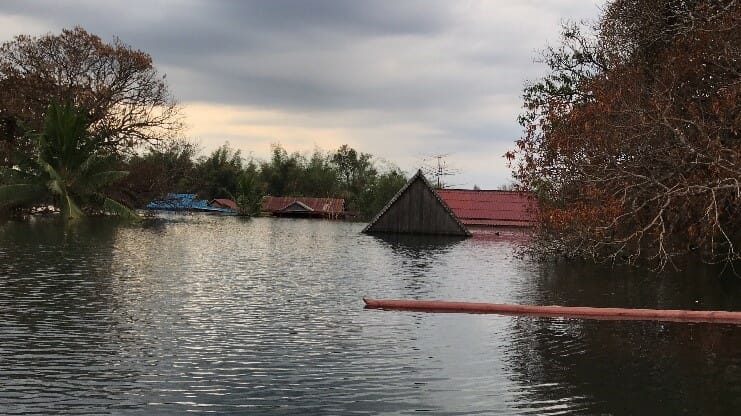 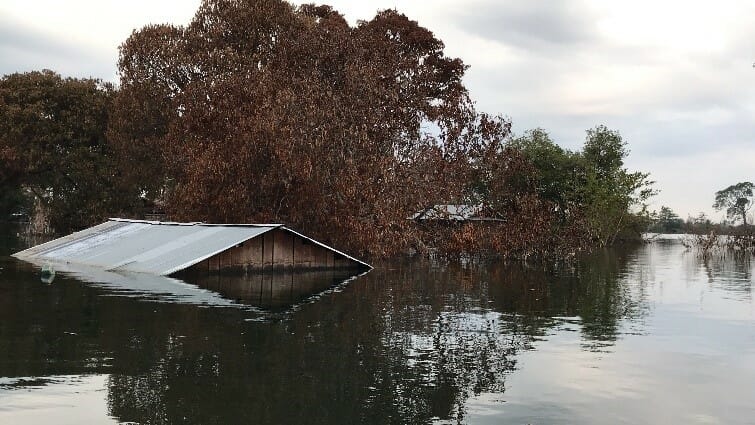 Srekor resident Bong Kheun was forced to resettle when the floodwaters reached his roof. Earlier this week, Bong Kheun says that he attempted to return to the old village to monitor the rising floodwaters and to collect a few belongings remaining in his home. When he arrived, it was hard to see where his house had been, as the village was fully submerged.

“I had tears in my eyes when I saw my flooded home and village. Every time I think about my life before our village was flooded, I long to go back to that time.”

By Monday, 26 January, the floodwaters had reached his rooftop, the red paint on the roof the only indication that this was his home. According to local residents, the water level has nearly reached the top of the dam wall, with approximately 50 centimeters remaining until the reservoir reaches full capacity.

Once a proud community of farmers and fisherfolk, the thriving community of Srekor has become a silent water world, its residential, historical, and spiritual sites vanished from view. 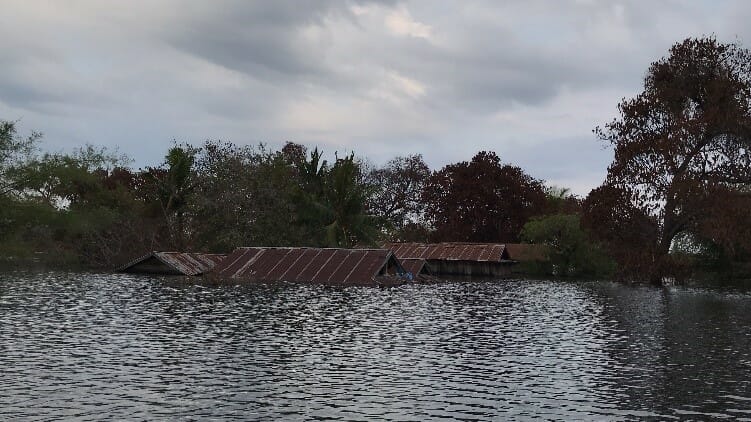 Photo of the Srekor area taken on the morning of 30 January 2018 by a local resident.

Background on Lower Sesan 2 Dam
The Lower Sesan 2 Dam is located just below the confluence of the major Sesan and Srepok tributaries and about 25km from the Mekong River. The Lower Sesan 2 Dam is being developed by a consortium of Chinese, Cambodian and Vietnamese companies, including China’s Hydrolancang International Energy Co. Ltd and Cambodia’s Royal Group. According to publicly available information, the completed dam is approximately 75m high and 8km long and will create a 33,560 hectare reservoir. The dam has a generating capacity of 400 MW. More than 5,000 people, most of whom are indigenous and ethnic minority groups, will be displaced. Hundreds of families from five villages have already moved to designated project resettlement sites.