December 16, 2020, Washington, D.C.–Today, the Securities and Exchange Commission (SEC) voted 3-2 on a rule to implement Section 1504 of the Dodd-Frank Act, with two strong dissenting statements from Commissioners Lee and Crenshaw. Initially enacted in 2010, the anti-corruption law mandates that the SEC enact regulations requiring oil, gas, and mining companies to publicly disclose the payments they make to governments worldwide. Although the SEC finalized a strong rule in 2016, one of the Trump Administration’s first acts in 2017 was to sign into law a resolution gutting the rule under the Congressional Review Act. EarthRights International Senior Attorney Michelle Harrison, who served as counsel to Oxfam America in past litigation over the rule, issued the following statement in response:

“It’s disappointing to see the SEC rushing out last-minute handouts to the oil industry and corrupt actors in the Trump Administration’s final days. Section 1504 was enacted to make the U.S. a leader in the fight against corruption. With today’s vote, the SEC achieves precisely the opposite. The rule goes against the industry norm, siding with the small minority of companies intent on keeping their deals with corrupt governments a secret.

“EarthRights provided extensive legal analysis to the SEC on the proposed rule during the public comment period in March, outlining its many problematic features. We also called for the rule to be re-proposed in light of its failure to account for how the transparency landscape has evolved, including the fact that hundreds of companies are already regularly reporting contract-level payments to governments under regulations in more than 30 countries. Investors, legal experts, anti-corruption watchdogs, major oil and mining companies, and many others also submitted comments calling for a far stronger rule. Today’s rule disregards this extensive input.

“The outgoing SEC Chairman prides himself on his reputation for fighting corruption, but this vote rushed out in his final days in office will stain that legacy, benefiting corrupt actors at the expense of  investors, who have spent the last decade calling for strong rules aligned with other markets.

“The final rule is legally flawed and appears unlikely to withstand judicial scrutiny. It is at odds with the plain language and intent of the statute and the overwhelming weight of the evidence in the rulemaking record. We’ll continue to review closely, but we remain as committed as ever to seeing Section 1504 implemented in the way Congress intended and will take any action necessary to ensure that result.

“The Biden Administration must make restoring U.S. leadership in the fight against corruption an urgent priority. Under new leadership, the SEC should act quickly to put in place a legally sound rule that aligns with the international community and carries out the statute’s pro-transparency intent.” 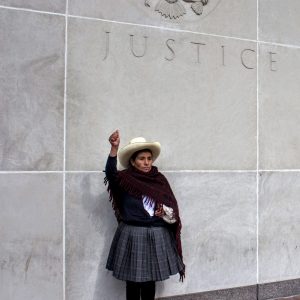