2016 Goldman Environmental Prize winner Máxima Acuña de Chaupe was hospitalized after being attacked, allegedly by security forces hired by Minera Yanacocha, a subsidiary of Denver-based Newmont Mining, according to information provided by the Chaupe family. The attack took place on Máxima’s property in northern Peru that the mining company has been trying to obtain for its Conga gold mine project.

“Minera Yanacocha must immediately stop their harassment of Máxima and her family, denounce attacks like this one, and call on its employees, agents and all others to ensure her safety,” said Earthworks’ Executive Director Jennifer Krill.

The attack against Máxima is an alarming reminder of the murder earlier this year of Honduran activist Berta Cáceres. Berta was the 2015 Goldman Environmental Prize Winner from South and Central America. Both Berta and Máxima put their lives at risk by publicly denouncing multinational corporations threatening their communities.

“Environmental defenders like Máxima, and the late Berta Cáceres before her, should not have to risk their lives to protect their homes and communities,” said Martin Wagner, managing attorney at Earthjustice.

Máxima, who has lived in Tragadero Grande since the early 1990s, has been beaten, intimidated, and even sued by Minera Yanacocha. In 2014, Peruvian courts ruled in Máxima’s favor in an ongoing criminal complaint by the company.

In April, prominent civil society groups including Global Witness, Sierra Club, Earthjustice, Earthworks, SumOfUs and others wrote to Newmont calling on the company to drop its lawsuits against the Chaupe family and end their harassment. The company failed to respond.

"The Chaupe family has been harassed and beaten by Yanacocha for years," said Katie Redford, Founder and Director at EarthRights International, which has been supporting and advising the Chaupe family. "They are prepared to pursue all legal options to obtain justice."

This most recent attack highlights the failures of both Newmont and the Peruvian government to uphold security, human rights and the consent of local communities. Newmont has ignored multiple calls from civil society to stop the physical and legal harassment of the Chaupe family, and the Peruvian government has failed to provide security for the Chaupe family as ordered by the Inter-American Commission on Human Rights (IACHR).

“Everyone involved in the mine project – the companies, the government, the security forces – is responsible for ensuring Máxima’s safety,” said Martin Wagner of Earthjustice. “By failing to speak and act against it, they are condoning this kind of attack and creating further risk to Máxima, not to mention their own reputations.”

In February, Newmont filed a statement with the Securities and Exchange Commission indicating that they were no longer pursuing the proposed Conga mine that threatens the Chaupe home.

“Newmont needs to immediately address the alleged involvement of its subsidiary Yanacocha in the criminal harassment of Máxima and her husband.  Newmont has reported to investors that it isn’t pursuing the Conga mine, but these attacks on poor subsistence farmers indicate that further plans are in development. What's happened is shocking, and shareholders need to know the potential risk of such an unethical venture,” said Glen Berman, Interim Executive Director of SumOfUs. 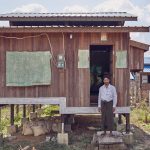