This baseless racketeering case is Resolute’s second attempt to silence their critics using a Strategic Lawsuit Against Public Participation (SLAPP). The court allowed narrow, non-RICO claims to proceed based on only two of 296 claimed misstatements. The remaining defendants are confident that they will prevail once evidence is presented, because their statements were based on the best available science. The court also ordered that Resolute must pay legal fees and costs for some  of the claims that were dismissed.

Although Resolute is relatively unknown in the United States, the company is widely recognized in its home country of Canada as the world’s largest producer of newsprint. For years, environmentalists have accused Resolute of unsustainable logging practices in Canada’s boreal forest, a region that is home to indigenous peoples and diverse wildlife.

While the court has recognized the baselessness of Resolute’s racketeering claims, other corporations, like Energy Transfer – the company behind the fraught Dakota Access Pipeline – are using the same tactics to try to silence and intimidate critics. Greenpeace USA as well as Native American organizer Krystal Two Bulls face a $900 million SLAPP filed by Energy Transfer. EarthRights International also represents Ms. Two Bulls in that case. (read more about the case here).

“Companies like Resolute have always tried to use their money and power to scare their critics into silence. Nobody likes a bully, and the Resolute court decision shows that these legal bullying tactics will not prevail. Now, more than ever, we are committed to defending the free speech rights of individuals and organizations like Greenpeace, and so many others, that our democracy and our planet depend upon.”
Katie Redford, Co-founder and Director of EarthRights International

“In addition to dismissing most of the case, the judge’s decision to throw out the abusive racketeering claims is a positive development and a win for advocacy. From day one, it was clear Resolute intended to bully legitimate advocacy organizations and forest defenders by abusing laws designed to curtail the mafia. The judge made it clear this would not be tolerated.”
Tom Wetterer, Greenpeace USA General Counsel

In 2013, Resolute Forest Products filed a CAD$7 million defamation case against Greenpeace Canada and two staff members in Ontario, which is still pending.

On May 31, 2016, Resolute filed a lawsuit for CAD$300 million (approximately US$239 million) in the U.S. District Court for the Southern District of Georgia, alleging violations of the Racketeer Influenced and Corrupt Organizations Act (RICO) and other claims against Greenpeace International, Greenpeace, Inc., Greenpeace Fund, Inc., Stand.earth (formerly ForestEthics), and five individual staff members of these independent organizations.

The case was transferred to the Northern District of California on May 16, 2017, when Resolute failed to demonstrate that the case had enough connection to Georgia. On October 16, 2017, the U.S. District Court for Northern California dismissed all of the logging company’s claims with leave to amend. Less than a month later, Resolute’s lawyers filed a repackaged version of the same meritless claims, and Greenpeace and the other defendants moved to dismiss

New York City-based law firm Kasowitz Benson Torres LLP, a law firm with deep ties to Donald Trump, is representing Resolute in this SLAPP. Kasowitz is also helping another company, Energy Transfer, to bring a SLAPP against Greenpeace and others using the RICO statute.

The Racketeer Influenced and Corrupt Organizations (RICO) Act is a powerful and sweeping law that allows civil parties (as well as federal prosecutors) to take action against racketeering activity. Since the law is directed at criminal acts, it is punitive in nature and allows civil parties to recover triple the amount of damages they suffered, and to hold defendants responsible for the actions of other members of a criminal conspiracy. If abused, therefore, RICO provides a uniquely powerful means of criminalizing dissent. Corporations rely on RICO to smear these groups as “criminal enterprises,” while claiming exorbitant damages for the “harm” they claim to have suffered. 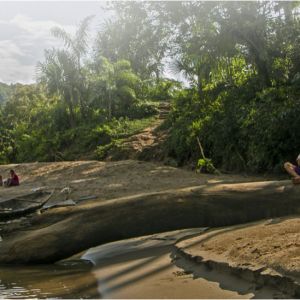