Denver, Colorado, September 6, 2019 – In a significant victory for communities in Colorado and the climate justice movement, federal judge William J. Martínez ruled last night that the climate lawsuit against Suncor Energy and Exxon Mobil will be decided in Colorado state court, rather than federal courts. EarthRights International, the Niskanen Center, and Denver attorney Kevin Hannon represent Boulder County, San Miguel County, and the City of Boulder in the case against the companies for their role in causing and exacerbating the climate crisis in Colorado.

Fifteen local and state governments around the country have filed lawsuits against the oil and gas industry for the climate damages caused by fossil fuels. The companies have tried to move the cases to federal court as part of a strategy to avoid liability. With the Colorado decision, four out of five federal courts have now rejected this industry gambit, ruling that the cases belong in state court.

The case is expected to immediately move forward in Boulder County District Court. Decisions returning cases to state court are ordinarily not appealable.

The decision highlighted the oil companies’ mischaracterizations of the plaintiffs’ claims, which are about paying for the costs of climate harms, not controlling emissions or regulating the industry. It also noted that Exxon’s current arguments were contrary to positions it had taken in a previous climate case brought by an Alaska native community.

The ruling comes on the heels of a recent and powerful victory for states and local governments against opioid manufacturers, involving similar claims, similar types of damage, and similar types of conduct by industry.

Boulder County, San Miguel County, and the City of Boulder sued Suncor and Exxon in April 2018 for the costs that they face due to climate harms. Colorado is one of the fastest-warming U.S. states, and these communities continue to experience problems associated with rising temperatures, including more frequent and destructive wildfires, droughts, and heatwaves; a reduced snowpack; degraded air quality; and more. Over the next three decades, these communities are expected to face costs reaching hundreds of millions of dollars or more to adapt to and mitigate the impacts of climate change.

“This is a significant victory for our clients, confirming that their claims should be heard in Colorado courts under Colorado law. These local governments are doing what they can to address the climate crisis, while Exxon and Suncor have acted and continue to act recklessly. These companies knew of the damages that fossil fuels inflict on the environment and communities, but chose not to come clean.” –Marco Simons, General Counsel, EarthRights International

“Defendants threw in the kitchen sink to try and get this case in federal court, arguing seven different bases for federal jurisdiction. The court recognized defendants’ arguments for what they were – an attempt to find a more favorable forum by confusing the issues, and ultimately to avoid having to answer for their behavior. We are pleased that the court saw through this effort.” – David Bookbinder, Chief Counsel, Niskanen Center

“Colorado communities and local businesses and industries are suffering from the economic, health, and safety consequences of the climate crisis. Adapting to these impacts requires significant planning and spending by local governments. It’s unjust for these costs to fall on Colorado residents. Exxon and Suncor, who profited from their reckless actions, need to step up and pay their fair share rather than footing Colorado taxpayers with the bill.”
–Boulder Board of County Commissioners

“The climate crisis is now directly impacting the health and lives of people in our communities, our ecosystems, and our economy. Local governments face the increasing burden of addressing mitigation actions and direct impacts to our public health and safety, roads and infrastructure, and in our case the uncertain future of our ski area–our main economic driver. It is unacceptable to allow fossil fuel companies to continue to benefit from massive profits, while our taxpayers face increasing costs directly attributable to the actions of these corporations. We are hopeful that these companies will either join us in seeking solutions or be forced to by the Colorado Court system.”–San Miguel County Commissioner Hillary Cooper. 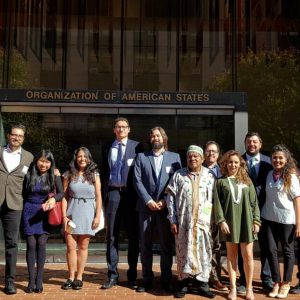