A few weeks ago, Cook and I observed a consultation between Sor Rattanamanee Polkla, a Thai lawyer, and representatives from 8 communities (Chiang Rai, Loei, Nongkhai, Buangkarn, Nakonpanom, Mookdaharn, Aumnatcharoen and Ubon Rachthani), to discuss next steps in their fight against the controversial Xayaburi dam in Lao PDR. Last August, on behalf of the 8 communities, Sor filed a case in the Administrative Court of Thailand challenging the validity of the power purchase agreement between the Electricity Generating Authority of Thailand (EGAT), the buyer, and the Xayaburi Power Company Limited, the operator.  The power purchase agreement is driving the construction of the Xayaburi dam, which, if completed, will very likely impact and threaten the livelihoods of these downstream communities.

Sor has extensive experience working closely with communities in advocating for their rights. As Cook previously wrote, in conducting several community consultations during the course of this case, Sor is trying to use the Mekong River Commission’s Procedures for Notification Prior Consultation and Agreement (PNPCA), procedures that the National Energy Policy Council, Thai Cabinet, and EGAT shirked when signing and approving the power purchase agreement.

A Bump in the Road

Disappointingly, the Administrative Court of Thailand recently denied jurisdiction to hear the communities’ case, prompting this most recent urgent community consultation. The administrative court based its decision on three grounds:

Nevertheless, this is not the end of the communities’ efforts to delay or halt the project.

While the administrative court decision is disheartening, Sor and the villagers refuse to give up in the face of adversity. Sor led this most recent community consultation to explain the court’s rationale for refusing to hear the case and to brainstorm strategies as a group. She also provided potential grounds for appeal and an explanation of the appeals procedure. Under Thai administrative law, an appeal must be brought within 30 days of the relevant decision. In a team effort to meet this rapidly approaching deadline, the community representatives offered valuable input and valid concerns including elaborating on the grounds for appeal, planning upcoming activities, and suggesting methods for effective media coverage.

During our lunch break, we shared plates of tasty steamed fish from the Mekong River. A community representative joked with some sadness that we were enjoying the last of the Mekong fish. This was a somber reminder that should the appeal fail, the villagers will be the ones forced to face the impacts of the project on a daily basis. Food insecurity resulting from the project is clearly a major issue for the villagers, an issue that cannot be resolved by additional and unnecessary power generation from Xayaburi dam.  However, we should also remember that even if the appeal is denied, the communities will need to continue fighting together because another ten dams are planned below China, and more in China itself.

This guest post comes from Evelyn Chuang, a law student from Washington University in Saint Louis, currently interning with our legal team in Southeast Asia. 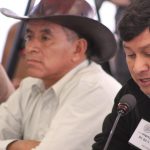