Home   »   Blog   »   Where Will the Obama Administration Stand? With Real People or With Corporations?

Where Will the Obama Administration Stand? With Real People or With Corporations?

As I write this post, the Obama administration and its Solicitor General are deliberating which side they will support in the upcoming Kiobel v. Shell case, where Shell says they shouldn’t be liable for human rights abuses simply because — get this — they’re a corporation. We need the administration to send a clear message that corporations cannot be immune from legal responsibility for the actions they commit across the globe.

When this case first made its way to the Supreme Court earlier this year, countries like the U.K. and the Netherlands submitted briefs in support of Shell, but the U.S. government thankfully stood with real people — victims of human rights abuses like torture and crimes against humanity. Now the case is being heard again, governments are weighing in again, and the Obama administration could switch sides — we can’t let that happen!

When Shell argues that they are are simply a corporation and should therefore not be held liable for their actions overseas, I find myself truly astounded. If you or I were to travel overseas and commit human rights abuses, we would rightfully be held accountable for our actions. But a corporation gets to be immune?

It is critical that the United States not allow our country to act as a safe haven for multinational corporations that are complicit in human rights abuses around the world. If these corporations are present in the US, doing business, making money — and yes, enjoying free speech rights — then they better abide by US and international laws, and be held accountable when they don’t.

We’ve put together a petition that highlights the urgency of this moment.  Shell and its friends have raised their voices loud and clear, asking for immunity from human rights law in US courts.  We need to raise our own voices and let the administration know that it is unacceptable to stand alongside Shell and other corporations that put profit over people. Tell the White House to stand up for human rights and real people, not for corporate power! 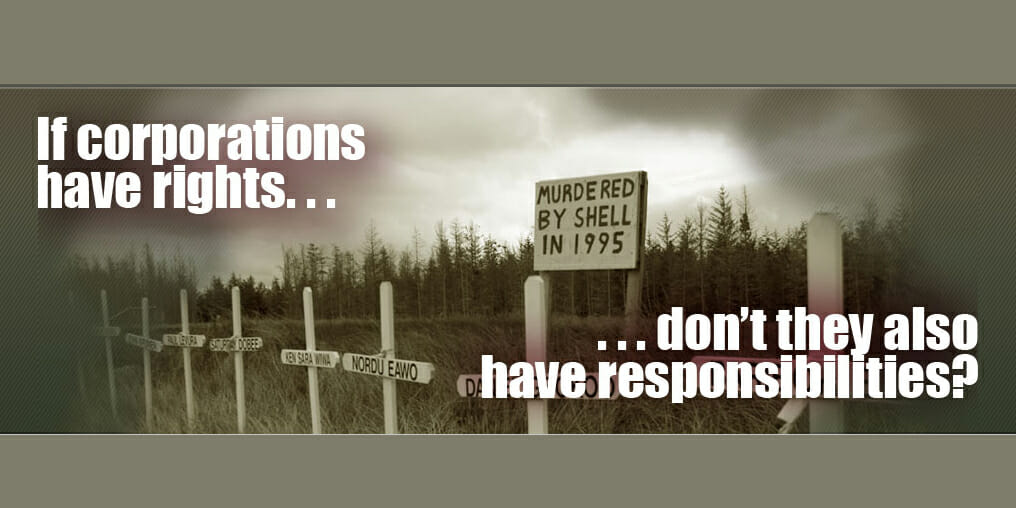