Celebrations for the International Day of Action for Rivers began early in Cambodia this year on the famous Koh Dach Island in Kandal province, where the people rely on rivers like the Mekong and Tonle Sap Rivers for their livelihoods. On March 11, 2018, volunteer university students from various universities, and some who are involved with groups such as EarthRights International and other concerned organizations conducted an event under the theme of River is Life. 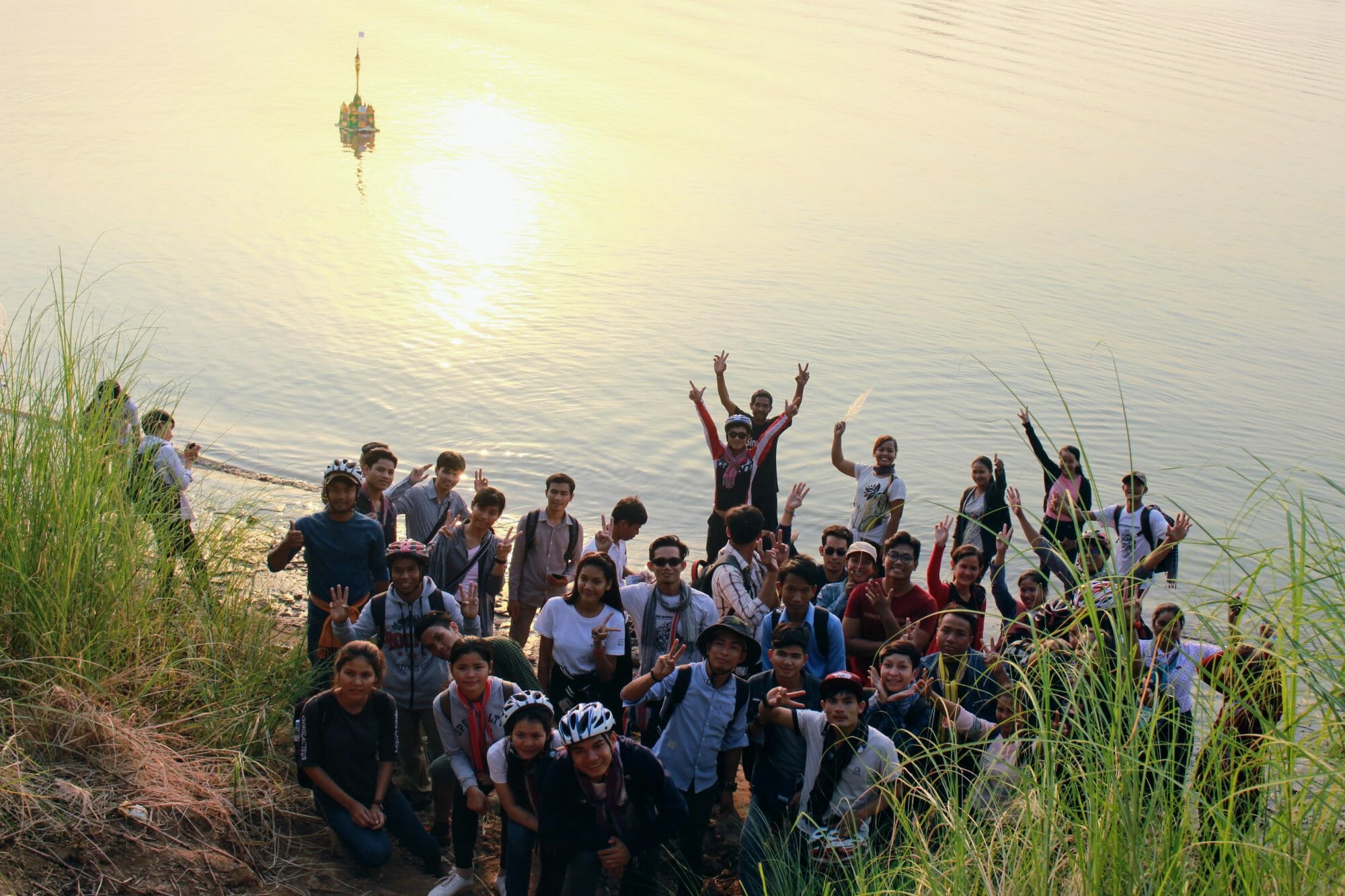 International Day of Action for Rivers: River is Life participants celebrate the value of Cambodia’s rivers in their lives and cultures.

Riding for Rivers: River is Life

Around 100 students from various universities in Phnom Penh collectively agreed to celebrate the International Day of Action for Rivers under this theme. The 100 students rode their bicycles from Phnom Penh to Koh Dach (a round trip of approximately 50 kilometers) to raise awareness of the value and benefits of rivers. These cyclists rode their bicycles to support environmental friendly actions. They shared this love by providing learning equipment to the students at the Coconut School on Koh Dach, where they recycle the rubbish into usable, sustainable materials. 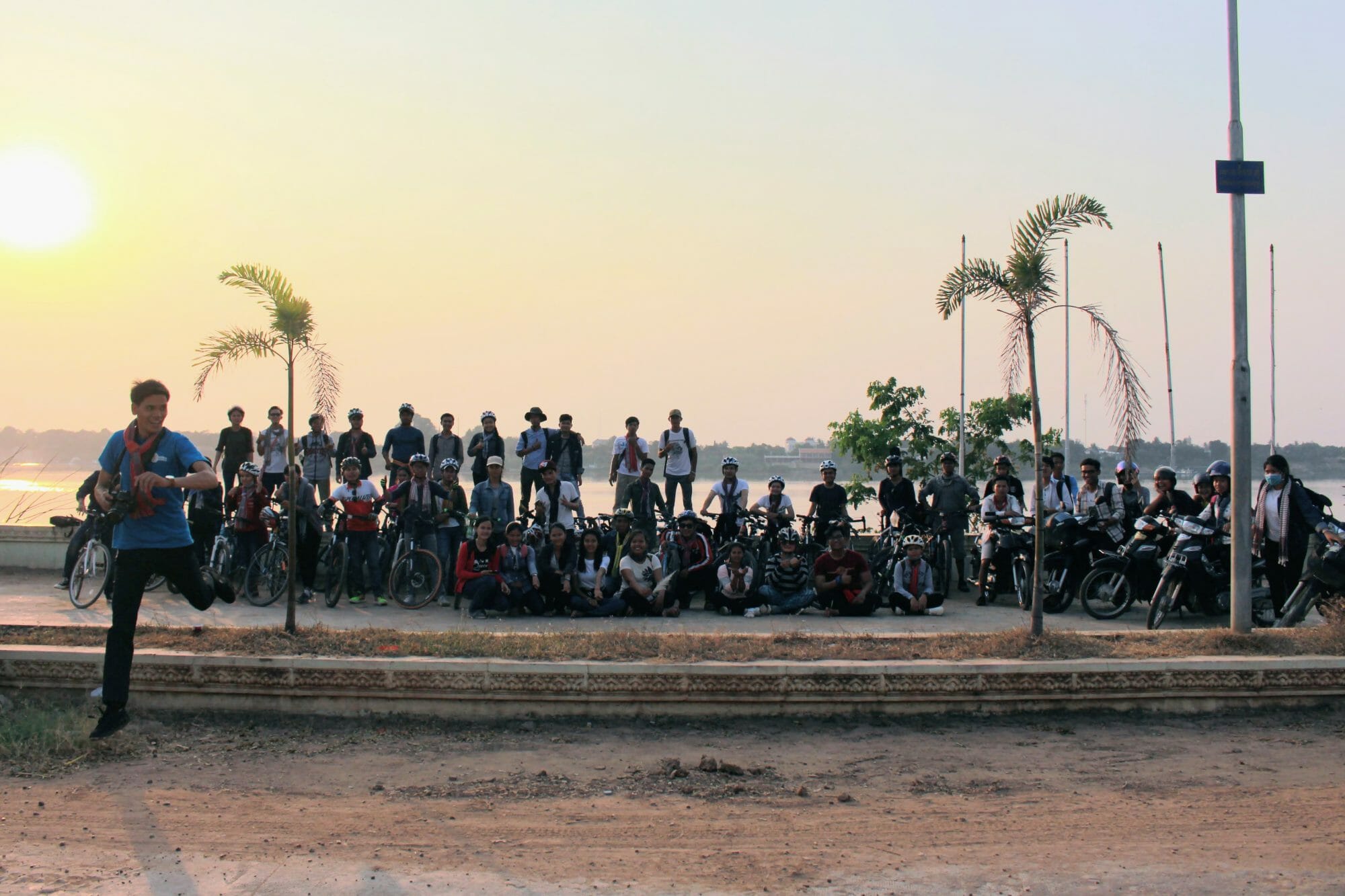 International Day of Action for Rivers: River is Life participants pause on their 50-kilometer bicycle ride.

A Buddhist traditional ceremony was also conducted at Wat Chong Koh Knong where people believe in praying for the health of the Mekong river and thanking her for feeding food to millions of people. A 60-year-old A Char, a man who dedicates himself to practicing the traditional beliefs of the Buddhist theory, said, “We pray for Preah Neang Kong Hing [Kong Hing prince] to take care of our river as she is a river’s spirit.”

The participants in the ceremony wrote their own concerns and their wishes for the healthy river, the flooding that feeds the country, for Bonded Brotip or Loi Kathong, and to dismiss the bad luck of the river. 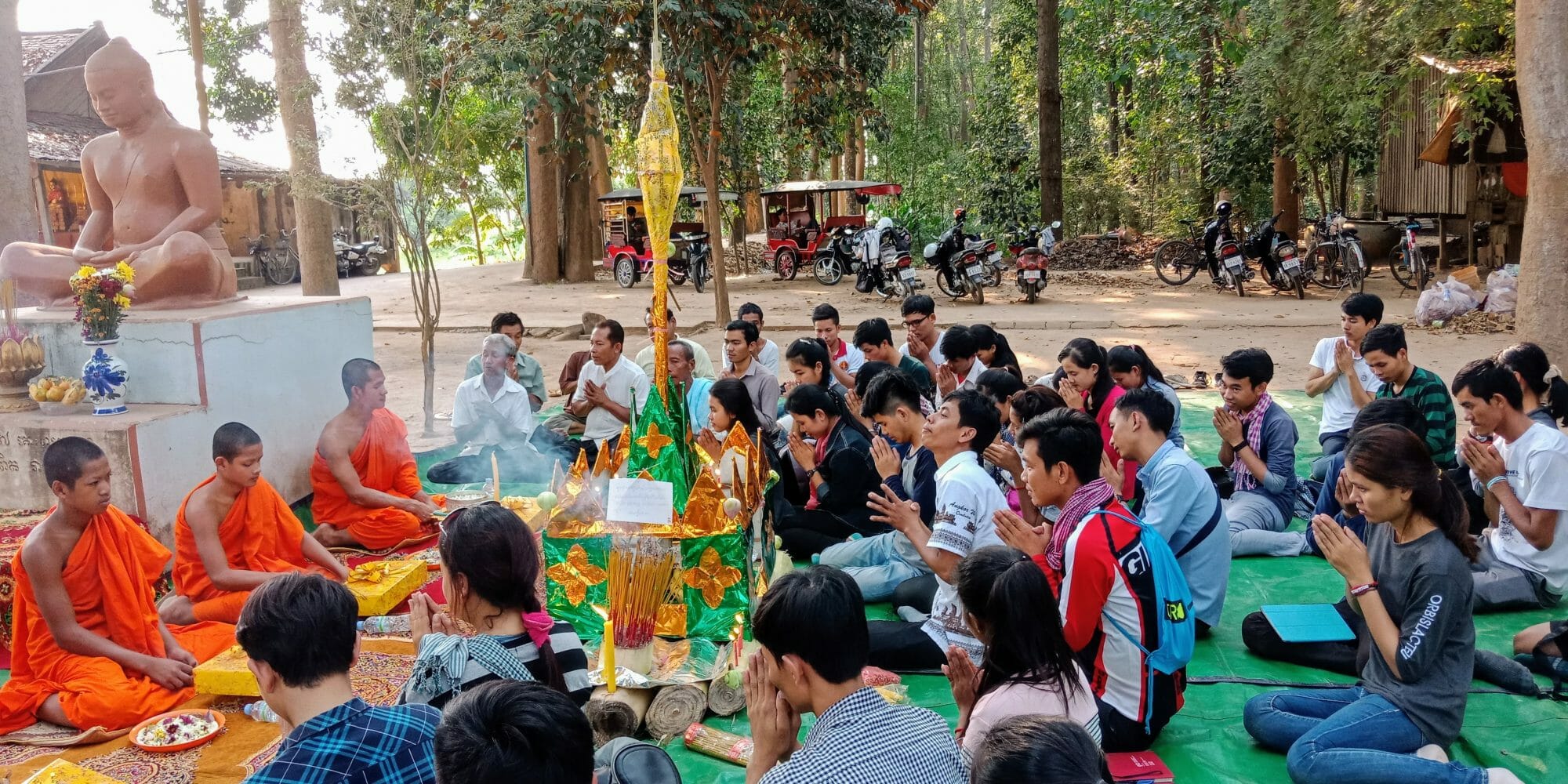 Some of the 100 participants played a Khmer traditional game called Veay Ka Om, the symbol of solidarity and sharing love and happiness to the surrounding people. Youth university students showed their deep concerns that activities of people in Phnom Penh lack transparency around many mega-development projects such as mining, navigation, forest concessions, land concessions, illegal fishing and Mekong upstream dams. 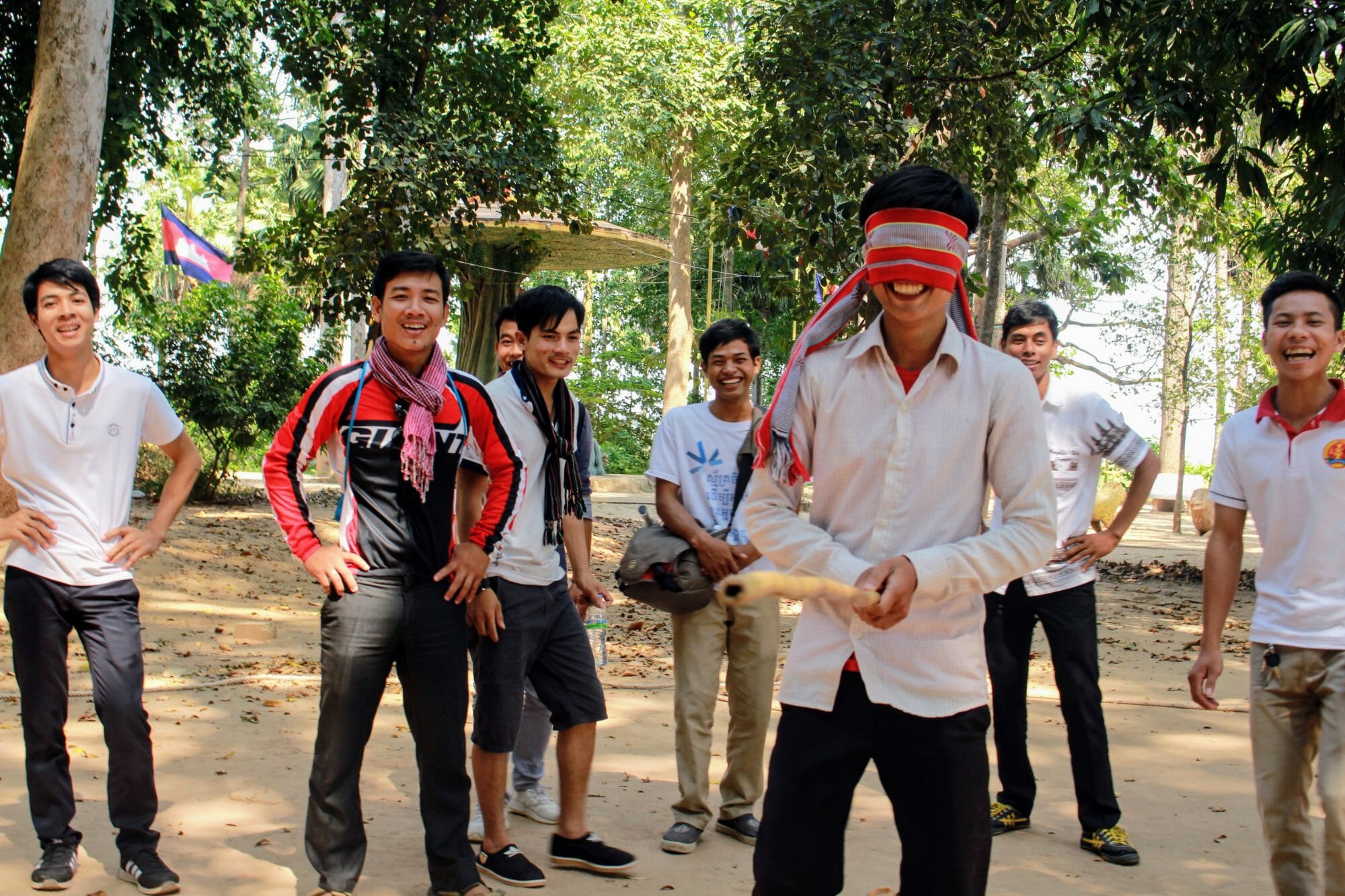 For International Day of Action for Rivers, Cambodian students played a traditional game and spoke about the importance of rivers in their lives and cultures.

Are Dams the Answer?

Recently, the Cambodian Government proposed two controversial dams along the mainstream of the Mekong: the 3300 MW dam in Sambor district, Kratie province, and the 900 MW Stung Treng dam located in Talavborivat district, Stung Treng province. The reservoirs from these two dams are going to displace more than 30,000 people. People are also concerned about the Lower Sesan II Dam, which was temporarily blocked until its reservoir began filling in July 2017.

Oudom, an environmentalist, has shown his deep concerns that the Mekong River and her tributaries are in trouble due to many destructive development projects and mega-dam projects such as these mainstream dams.

“Dams temporarily block the fishing migration and the ecosystem in the river, and they affect local communities’ livelihood activities,” said Oudom. “Dams may have caused irreversible harm to ecosystems in the Mekong region.”

As one 26-year-old indigenous man at this International Day of Action for Rivers event said, “The river is not only important for community livelihoods but also it is the symbol of the indigenous people. Our beliefs and traditions rely on the river. We pray, we swim, collect food – we get everything from the river but now the Lower Sesan 2 dam and its turbines have blocked it. So we lose our home and everything with it – even our ancestor and spirit forest.“ 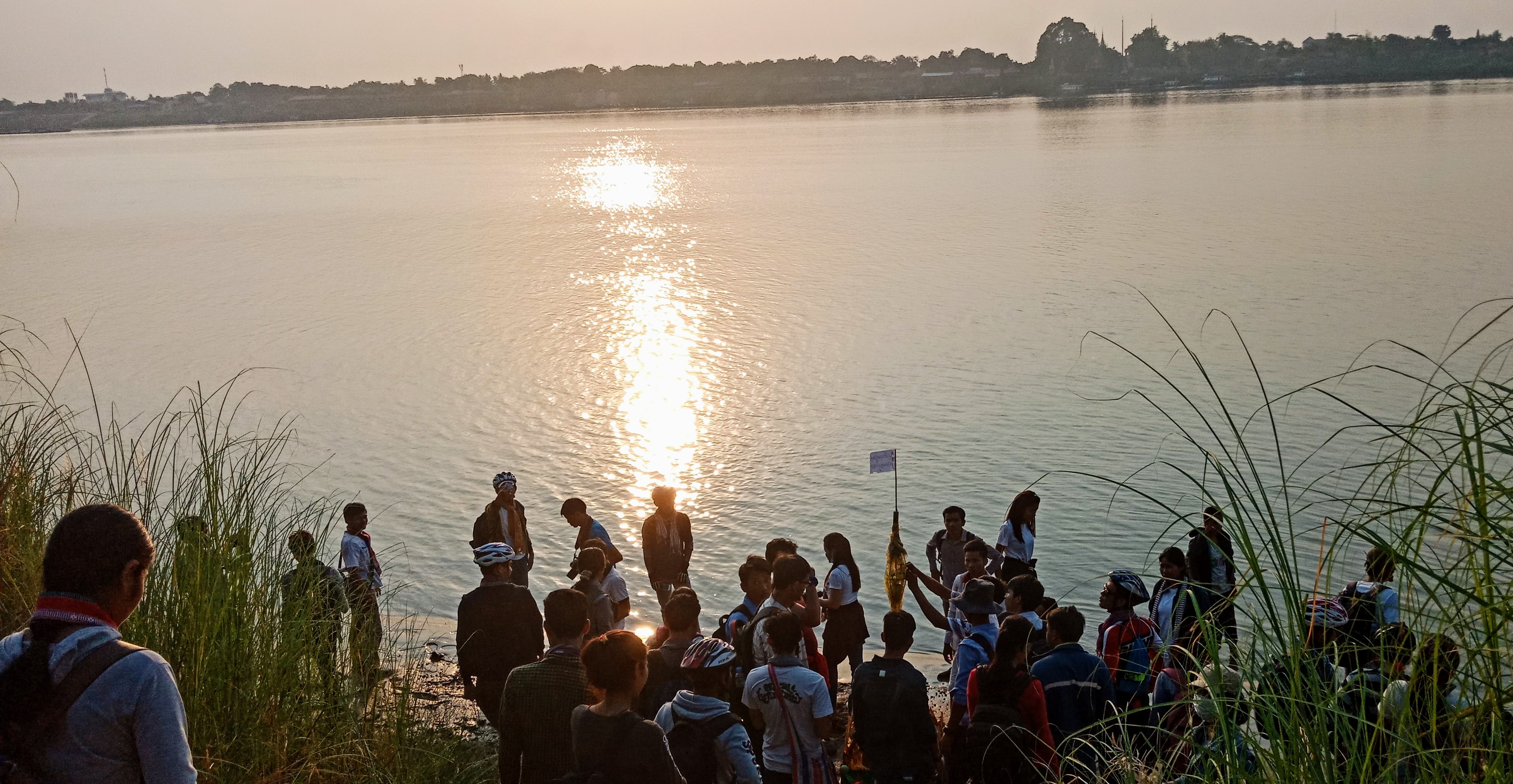 On International Day of Action for Rivers, youth in Cambodia acted on their belief: that “River is Life.”