We Will Never Stop Raising Our Voices: Facing the Pak Beng Dam

This blog was written by Tera Wilson, an intern with the EarthRights School.

Standing on the riverbank of the Mekong, listening to the sound of music mixed with bird calls and watching people glide by on fishing boats, it is difficult to believe that someone would harm such a beautiful place. Yet Thailand plans to do just that. The Thai government is quickly growing its investments in hydropower dams in neighboring countries. There are plans to construct 11 dams on the lower mainstream of the Mekong River – the portion of the river that travels through Myanmar, Thailand, Laos, Cambodia and Vietnam. For many of them, Thailand is either the main investor or has committed to buying a majority of the electricity generated. These mega-dams pose major risks to communities living throughout the lower Mekong river basin, especially those downstream of the dam, as unfortunately shown by the recent collapse of the Xe Nam Noy dam in Laos.

One dam proposed for the mainstream of the Mekong is the Pak Beng dam, a 912 MW project to be constructed in northern Laos, less than 100 kilometers from the Thai-Lao border. The Pak Beng dam is supported by China’s Datang Overseas Investment and Thailand’s EGCO Group (a subsidiary of the Electricity Generating Authority of Thailand, or EGAT). Laos would sell 90 percent of the electricity from the project to Thailand. If constructed, Pak Beng could lead to severe environmental and human rights violations not only for Lao people, but for every Mekong community. The consequences range from the resettlement of at least 6,700 people to destruction of livelihoods, as the dam may decrease the size of fisheries and alter the river ecosystem that Mekong people have relied on for food and income. These Mekong communities are already struggling to adapt to the impacts from six dams constructed on the upper Mekong in China. 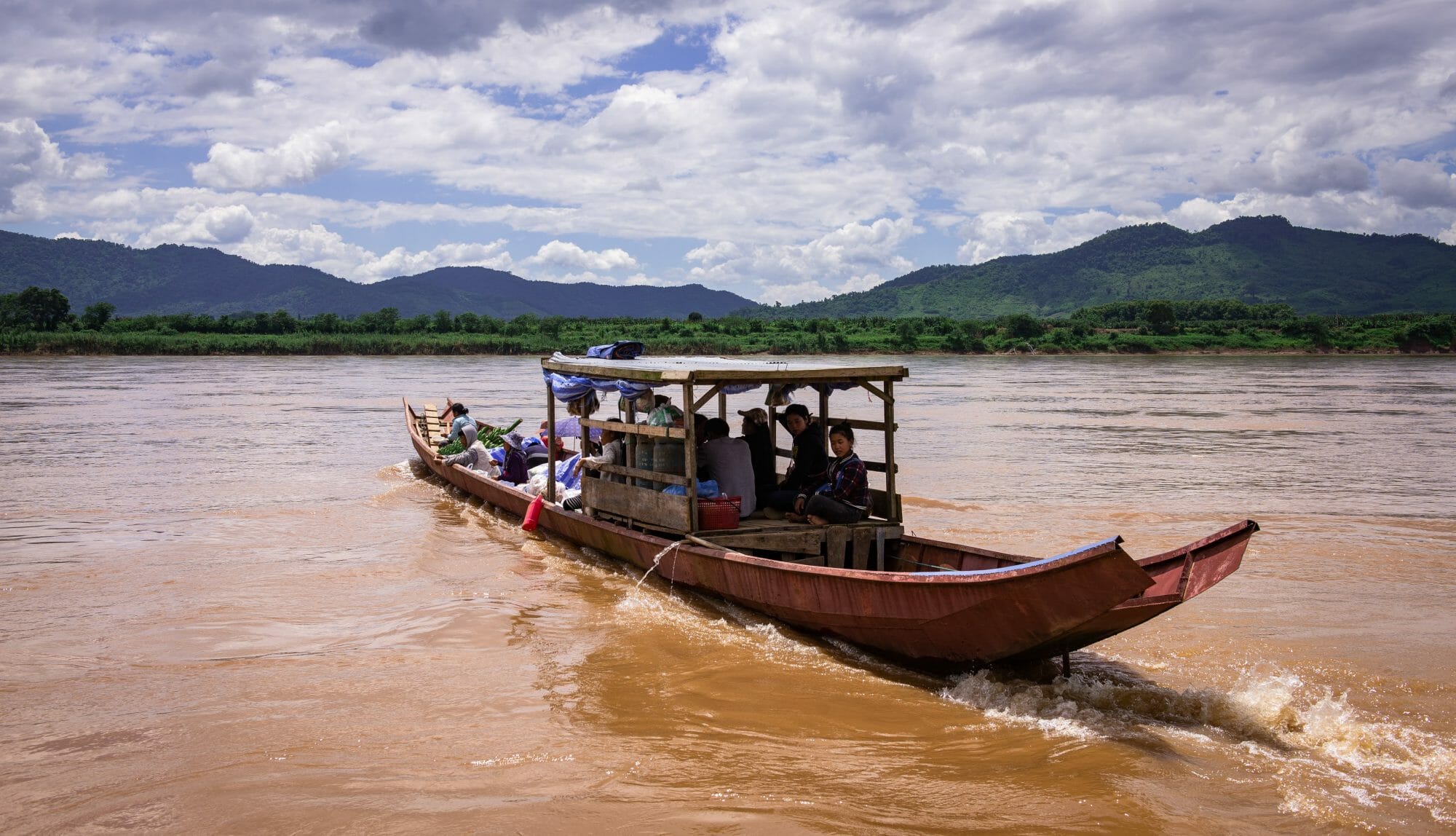 A boat crosses the Mekong River in northern Thailand near Chiang Khong.

One community already seeing the impacts from development on the upper Mekong is Baan Huay Luek, a village in northern Thailand that sits along the Mekong River. Most people there subsist from fishing, riverbank agriculture, or an annual harvest of river weeds. But one community member has commented that China’s dams have “switched the rules of nature” as they contribute to a decrease in fish populations, biodiversity, and river weed growth.

These changes have caused many fishing families to lose income, as they are forced to abandon their traditional livelihoods, often selling their daily labor to make ends meet.

Riverbank agriculture and river weed collection has started to disappear, threatening their food security. Some of these changes may also be consequences of climate change, an existential threat to communities across the Mekong basin. While parents lose their livelihoods, their children suffer a loss of culture and education. When families lose their traditional livelihoods, children are no longer able to learn local knowledge from their parents. They often miss school to stay home and take care of their younger siblings while their parents go to work on a construction site or farm.

One villager commented that “we rely directly on the Mekong, and we stand to lose everything we have” if the Pak Beng dam is built. Together, the Mekong dams threaten to flood their villages and “cut off the lifeblood of Mekong communities.” The Thai and Lao governments say that the purpose of the dams is to take advantage of natural resources and modernize Laos while supporting Thai economic growth through electricity supplies. But in reality, these projects lead to damaged ecosystems and communities at best, and cases like the catastrophic collapse at the Xe Nam Noy dam at worst.

One leader in Huay Luek said, “I don’t know how to stop dams, but I want to protect the environment, our culture, and strengthen our bond as a community. There’s no organization to fight for us – we must fight for ourselves. We will never stop raising our voices.”

In February 2018, EGAT sent a letter to the local Thai conservation group Rak Chiang Khong saying the decision to purchase power from the Pak Beng dam had been delayed – a victory for local communities, who hope that continued efforts will prevent the dam’s construction entirely. Following the recent collapse of the Xe Nam Noy hydropower dam in Laos, the Lao government has now announced that it will also suspend consideration of new hydropower projects and review planned dams such as Pak Beng as well as the country’s broader development strategy. Questions remain as to whether this review will reflect local Pak Beng communities’ concerns.

As one Huay Kuek activist said, “I’m not afraid because it’s for mine and my children’s life. I have rights, my people have rights.” 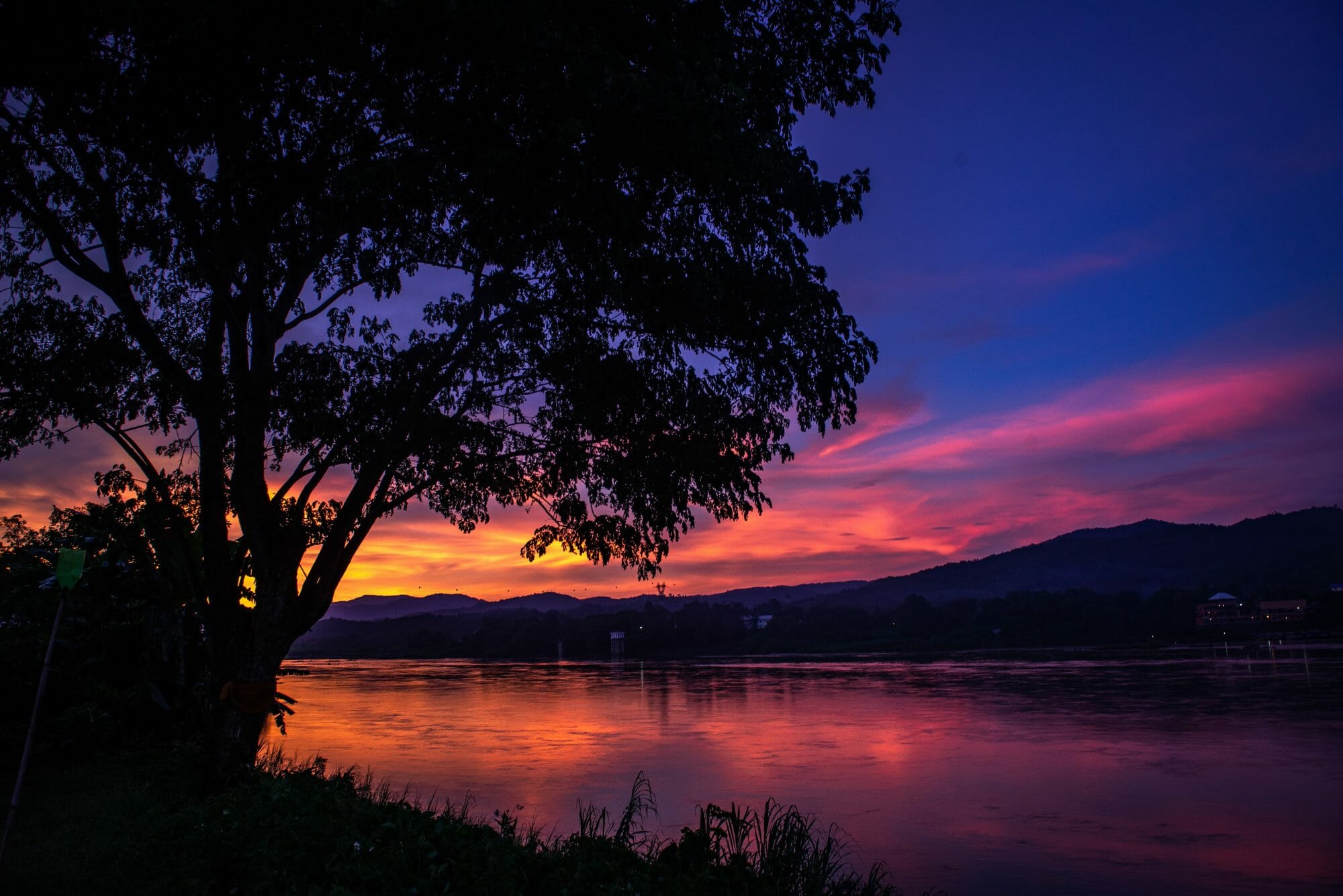 The sun sets on the Mekong River on the Thai-Lao border near Chiang Khong, Thailand.