The Malaysian Human Rights Commission (SUHAKAM) published their 2015 Annual Report that features a long awaited decision about last year’s complaint against Mega First Corporation Berhad, a Malaysian company. The complaint challenged the company’s Don Sahong hydropower project, currently under construction in Laos. The complaint was filed by a group of Cambodian, Thai and regional NGOs on behalf of fishing communities in Cambodia and Thailand that stand to be affected by the project.

The communities claim that if built, the Don Sahong dam will cause irreversible harm to regional fisheries in the Lower Mekong Basin, seriously affecting the lives, livelihoods and health of millions of people in Laos, Cambodia, Thailand, and Vietnam. Mega First, however, has failed to study the transboundary impacts of the project, failed to provide sufficient information about its impacts, and failed to provide any evidence that the proposed mitigation measures will work. It also did not provide an opportunity to affected communities in Laos, Cambodia, Vietnam and Thailand to be meaningfully consulted around the project.

Due to lack of political space, democratic institutions and legal mechanisms to address the issue in Laos, the affected communities turned to the Malaysian Human Rights Commission (SUHAKAM). SUHAKAM initially accepted the complaint and even conducted separate meetings with Mega First but ultimately concluded that it had no mandate to address a transboundary case and therefore could not proceed further with the inquiry.

It did, however, make recommendations to the Malaysian government to develop policies to monitor Malaysian companies operating abroad to ensure compliance with international human rights standards as provided under Principle 3 of the UN Guiding Principles on Business and Human Rights (UNGPs), and adhere to the Organization for Economic Co-operation and Development (OECD) Guidelines for Multinational Enterprises [1] and establish a National Contact Point to address complaints regarding corporate misconduct including acts/omissions outside the home country.

SUHAKAM also recommended to Mega First to ensure that its business operations and activities are conducted in a manner which respects the human rights of the people living in the affected areas, besides generating profit out of the project. SUHAKAM emphasized that Mega First has a distinct obligation to respect human rights in the conduct of its business, and urged the company to hold firmly to the principles enunciated in the UNGPs.

SUHAKAM’s challenges in addressing a transboundary case highlight the struggles of pursuing transboundary legal cases and the need to strengthen national human rights institutions and create an independent and functional regional human rights mechanism with a strong mandate. Despite not being able to conduct an inquiry, the Don Sahong case raised important questions regarding regional cross-border investment and corporate accountability. It also raised awareness not only around environmental and human rights issues of this particular project but also around Laos’ plans to build a cascade of nine dams on the Mekong mainstream.

SUHAKAM’s recommendations come at a crucial time when Mega First is aggressively pushing the project forward and proceeding with the construction of the dam despite the failure of the prior consultation process to obtain agreement to the project from the Thai, Cambodian and Vietnamese governments. Based on the information from the field, the coffer dam is under construction and the Hou Sahong and Hou Sadam channels have already been blocked, causing irreversible harm to fisheries, and local communities. Affected communities downstream have reported impacts, including decline in fish catch, dead fish, fewer sightings of Irrawaddy dolphins and pollution from construction. However, Mega First has failed to address issues of compensation for fish loss during construction and has overall ignored local communities who, as a result of its project, stand to lose their main source of food and livelihoods and sink into even deeper poverty.

Despite these threats, communities have not been dismayed from continuing to fight against the project and for the future of their children. They are firm in their position that Mega First should not proceed with the project until appropriate baseline studies are carried out, transboundary impacts assessed and mitigation measures proven to be effective. They also call on Mega First to start fulfilling their own human rights obligations and respecting the rights of communities affected by the Don Sahong project.

[1] OECD is an international economic organization which among other things recommends principles and standards for responsible business conduct for multinational corporations.

This post was written by Tanja Venisnik, former staff. 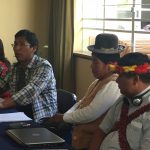