Home > Blog > The Victims of a Mega Development Project

On a cool day during the rainy season, I visited a village that had recently been relocated due to a large-scale development project.  On my walk around the village, I met one of the relocated villagers. He is 54 years old and has a big family. Prior to being relocated, he was a carpenter and planted vegetables on his land. Now, he does not have a stable job so he struggles to earn an income. He is depressed. As we spoke, I saw how upset he was as he told me his experience and the contrast between his original village and the relocation site.

“We were living happily with a regular income and doing agricultural work in the original village. Now, where is my land for planting? What will we do? As you can see, dirty water is also flooding under my house so our family breathes this terrible smell every day.”

With tears in his eyes, he said that his wife had passed away 15 days after their relocation. As a consequence of his terrible living situation in the new village, his son, who had been in Grade 11, dropped out of school to take up work in a factory. I felt sorry to see and to hear about their suffering.

Myanmar is a developing country that is undergoing political, economic and social changes. One such change is the ever-increasing number of development projects. Our country is always inviting local investment as well as foreign direct investment into the country as it seeks to benefit from a globalized world. All too often, these projects result in widespread land confiscation and other negative consequences for local communities. The topic I chose to research for my fieldwork with the EarthRights School Myanmar is one of these big development projects in Myanmar. Last year, dozens of villagers were displaced for the first phase of this massive project. Since their relocation, the villagers have faced many kinds of difficulties. The affected villagers have not received compensation for their lost land, and their new housing is grossly inadequate. As soon as I arrived at the relocation site, I saw that the area was flooded and that the people lived in small houses in dirty compounds.

I took my time to visit the whole village that day. I met a wonderful 86-year-old man who told me he has had land confiscated from him three times in his life. He has a small family of three, and he was a farmer before being displaced. That morning I met with him he told me about how his family has suffered because of the land they’ve lost. He said that he lives in constant worry that the military or government would come once again to kick them off their land. With a feeling of sadness, he told me that since he is elderly and nearing the end of his life, this third time losing his land is not important for him personally. He is, however, worried about what the future generations of his family will do. It upset him that since he lost his traditional farmland he could no longer pass this land onto his son as inheritance.

The relocated villagers have no access to job opportunities and are suffering as a result of living in housing that lacks proper water supply and sewage drainage. They live in small wooden houses, just 12 by 16 feet, with zinc roofs and no land for agricultural work, as they had before. The government allegedly created this project for development, but the reality I see now is that it makes the affected villagers even more impoverished.

In the evening, I returned to thank the villagers for speaking with me and sharing their experiences. At the end of spending only one day with this community, I had already witnessed countless violations of their human rights. These villagers have sacrificed their traditional work and their lifestyles for this development project and, at the very least, they deserve appropriate compensation for their land and for their lost income. For these reasons, I will work with my network to pressure the government and other stakeholders to fulfill their responsibilities to protect the community’s rights. 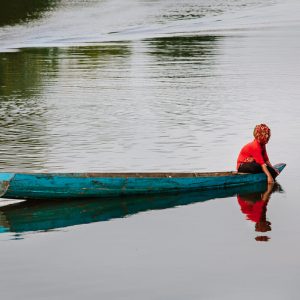 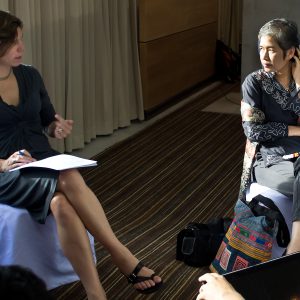