The confirmation fight over Amy Coney Barrett makes it clear that we must reform the Supreme Court so it can administer justice more effectively.

Amid the fight over Judge Amy Coney Barrett’s Supreme Court confirmation, members of Congress from both major parties have raised the prospect that Democrats might try to expand the Supreme Court. Such a move may be motivated by two factors. First, Republicans have abruptly changed their position on election-year Supreme Court vacancies. Second, assuming Judge Barrett is confirmed, Republican Presidents will have appointed six of the nine justices even though Democrats have won the popular vote in six of the eight elections during that same period (1988 to today).

At least one Democratic member of Congress–Rep. Ro Khanna (D-Calif.) — has announced a plan to change the way Supreme Court justices are appointed and introduce term limits, which would, in effect, increase the size of the Court in the short term. Rep. Khanna’s plan, which is part of Fix The Court’s agenda, is primarily directed at reducing partisan fights over Supreme Court nominations, replacing the current pandemonium with an orderly and consistent process.

Entirely independent of these partisan issues, which EarthRights does not take a position on, there may be good reasons to consider several reforms for modernizing the Supreme Court to enhance its administration of justice.

The Supreme Court is a supremely dysfunctional body. I say that without regard to the correctness of its decisions. It’s dysfunctional in a literal sense because it simply cannot ensure consistency of interpretation of the law across the country or that the law is justly applied.

Every American lawyer knows that the Supreme Court is incredibly selective about its cases. It typically issues fewer than 100 opinions per year, out of 7,000 to 8,000 petitions. Because many lawyers know that the Supreme Court rejects most cases, they often don’t even try to get theirs heard. It’s therefore common for lawyers to find decisions from different courts that conflict with each other. Sometimes these “splits” persist for decades. The Supreme Court just isn’t going to spend its time on most of them.

And perhaps more importantly, the Supreme Court has almost entirely given up on the idea that its role is to ensure that it’s administering justice fairly. No one seriously thinks that simply presenting a gross injustice in a particular case will capture the Supreme Court’s attention. The judges don’t have enough time or capacity to actually administer justice. All they can even try to do is maintain the rules of the game, not ensure that those rules are followed in every case.

Out of step with the world–and the states

That’s not how it works in most developed countries. The U.S. is the largest of the G7 nations but is tied with Canada–a country with one-ninth of our population–for the smallest Supreme Court. 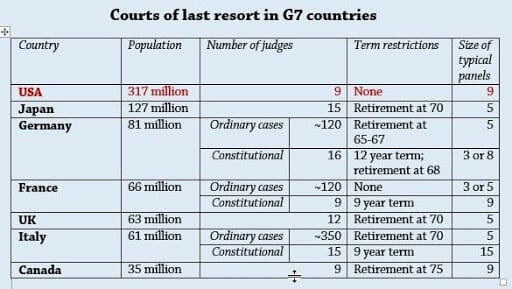 Many of these countries have more than one highest court–one for hearing ordinary cases and one for reviewing constitutional issues. France’s Constitutional Council has only nine members, but the vast majority of cases go to its Court of Cassation, which has over 100 judges.

Like the U.S., Canada, the United Kingdom, and Japan have a single high court to hear all cases. And in those countries, the size of their supreme court in relation to their population is considerably larger than in the U.S.–from one justice per 3.9 million residents (Canada) to one per 8.3 million (Japan). The U.S., by contrast, has one justice per 35 million residents.

For those enamored with American exceptionalism, it’s also worth pointing out that U.S. state supreme courts also don’t work like the U.S. Supreme Court. Only one state (Rhode Island) has life tenure for its supreme court. Despite their vastly smaller purview than the U.S. Supreme Court, some states, such as Nevada and Connecticut, hear most appeals in smaller panels than the full court.

For some time, the Supreme Court grew as the country did, and the judiciary expanded to support the Supreme Court. Congress first set the size at six justices in 1789. This fact eviscerates the notion that the Constitution abhors an even number of justices–the same people that wrote and adopted the Constitution immediately set the Court’s size at an even number. It was expanded to seven justices in 1807 and to nine in 1837. From 1863 to 1869, the number of justices fluctuated before the court eventually solidified at nine justices.

That system evolved over decades into the current structure where we have federal district courts–at least one per state, and a total of 94 districts–and federal courts of appeal covering 13 different “circuits.” This structure, which essentially stripped Supreme Court justices of all trial responsibilities and sent most appeals to the courts of appeal, was basically cemented in 1869, along with the nine-justice Supreme Court. We now have 673 judge positions on the district courts and 179 on the courts of appeal.

With the expansion of the lower courts, this system was able to keep up with the nation’s evolution–to a point. Most appeals were just heard by the appeals courts, but the Supreme Court also heard more cases. In the late 1800s and early 1900s, the Supreme Court issued 200-300 decisions each year.

But since then, the Supreme Court’s ability to both hear important cases and maintain uniformity has seriously declined–and it barely even seems to be trying anymore. One study found that nearly 70 percent of “circuit splits”–situations where multiple courts of appeal have come to different conclusions about federal law–were unresolved and likely to remain so. The Court’s caseload has fallen dramatically, such that it only issued 53 signed decisions last term.

This small caseload and inability to keep up with the thousands of appellate decisions issued each year means that the Supreme Court is unjust. If a court applies the law improperly and deprives people of their rights, the Supreme Court doesn’t have the capacity to correct this problem. In other words: The system is broken.

We can learn from other countries, including ones like the United Kingdom, with very similar legal systems, to modernize our Supreme Court to deliver justice more effectively. Here are three significant reforms worth considering:

1. Expand the size of the Court. Rather than “packing” the Court with justices of a particular ideology, the objective is to let it do its job. Even a Supreme Court with 15, 17, or 19 justices would be proportionally smaller, in relation to population and judicial caseloads, than other advanced economies and other points in U.S. history. There is no talismanic significance to nine justices.

2. Hear cases in smaller panels. Expanding the Court doesn’t help with its caseload unless another reform is also introduced: Most courts with many judges typically hear cases in smaller “panels,” not the full court. This is a routine practice in the federal courts of appeal. While such courts might have a dozen judges or more, they generally hear cases in panels of three judges. They only occasionally consider cases as a full court (or “en banc,” because lawyers love esoteric French terms).

Canada is the only other G7 country that does not hear ordinary appeals in smaller panels of its Supreme Court–every other country uses panels of 3 or 5 judges. Although Canada is the smallest G7 country, its Supreme Court issued 67 decisions last year–more than the U.S. Supreme Court. France and Italy hear constitutional cases in their full courts, of nine and 15 members, but as noted above, most appeals don’t go to these courts, they end up in the country’s Court of Cassation. In short, no one else does it this way.

We could still hear important or divisive cases in larger panels or the full court. Yet, most Supreme Court cases aren’t particularly divisive or ideological–approximately two-thirds are decided by votes of 9-0, 8-1, or 7-2. Hearing these cases in smaller panels would not change their outcomes.

It would benefit the court to have set terms. Why? Because presidents want to keep their justices on the court as long as possible, the recent trend is toward appointing younger justices. The average age of new justices hovered around age 54 for about 150 years, but in the past 30 years, it’s dropped to about 51 years old. This deprives the court of the wisdom and experience of older judges, such as Ruth Bader Ginsburg.

At age 60, Justice Ginsburg was the oldest nominee in the past 49 years, and a President today might hesitate to nominate someone of her age. But some of the Court’s most storied names, like Ginsburg, were also some of its oldest nominees. This includes Oliver Wendell Holmes (61), Louis Brandeis (59), and Earl Warren (62). Except for Justice Ginsburg, however, no one over age 55 has joined the Court since 1971.

Imposing term limits would allow a President to safely appoint an older, more experienced jurist without worrying about limiting their impact on the Court. Justices’ lifespan has crept up to over 82 years; a 60 or even 65-year-old justice could reasonably expect to serve out a term of, say, 15 years.

It’s clear the Constitution says nothing about the Supreme Court’s size–it’s changed many times. Nor does it say anything about whether the court can sit in smaller panels; Congress has mandated that the Courts of Appeals ordinarily sit in panels for many years. So the only real question here is about term limits.

All that the Constitution says about federal judges’ terms is this:

The judges, both of the supreme and inferior courts, shall hold their offices during good behaviour, and shall, at stated times, receive for their services, a compensation, which shall not be diminished during their continuance in office.

Some people interpret the “during good behavior” line to mean that judges get an automatic life tenure unless they’re impeached. But the Constitution does not say what it means to “hold their offices,” which could include shifting the position of a judge to a senior, retired position that does not have the same role. For example, there are currently three retired Supreme Court justices, two of whom–Sandra Day O’Connor and David Souter–sometimes sit on the federal courts of appeals. Additionally, current statutes allow judges to be forced into retirement, or allow the judicial governing bodies to take their cases away as a disciplinary sanction, but in either case, they keep their office, just like judges who voluntarily retire.

So, after the term limit, a judge can be removed from their role as a regular member of the Supreme Court but still retain the office of a justice of the United States. While there is surprisingly little legal scholarship on such a proposal, constitutional scholars have argued that it is permissible.

While there may be concerns over partisanship in Supreme Court appointments, there are sound reasons to modernize the Court that are simply about increasing its ability to administer justice. Congress should give them serious consideration.