Home   »   Blog   »   The Advances in the U’wa Case: A Lesson in Existence and Persistence for the Defense of Territory and Dignity

The Advances in the U’wa Case: A Lesson in Existence and Persistence for the Defense of Territory and Dignity

Last month, U’wa indigenous leader and lawyer Aura Tegría Cristancho began a three-week visit to the U.S. While in Washington D.C. to advocate for the U’wa case at the Inter-American Commission on Human Rights (IACHR), she gave a presentation to discuss the mobilization of the U’wa in defense of their territory in Colombia. Her presentation, hosted by our friends at Amazon Watch, began with the screening of the Guardians of the Blue Planet which shows the U’wa Nation’s connection to Madre Tierra (Mother Earth) and the difficult battle they have been fighting to protect their territory. Despite having made agreements in 2014 not to encroach on U’wa territory, the Colombian government failed to uphold these protections and allowed Ecopetrol to construct the Gibraltar Gas Plant in U’wa territory. In July 2016, the U’wa organized a peaceful take-over of the plant and maintained occupation of the plant for 49 days. 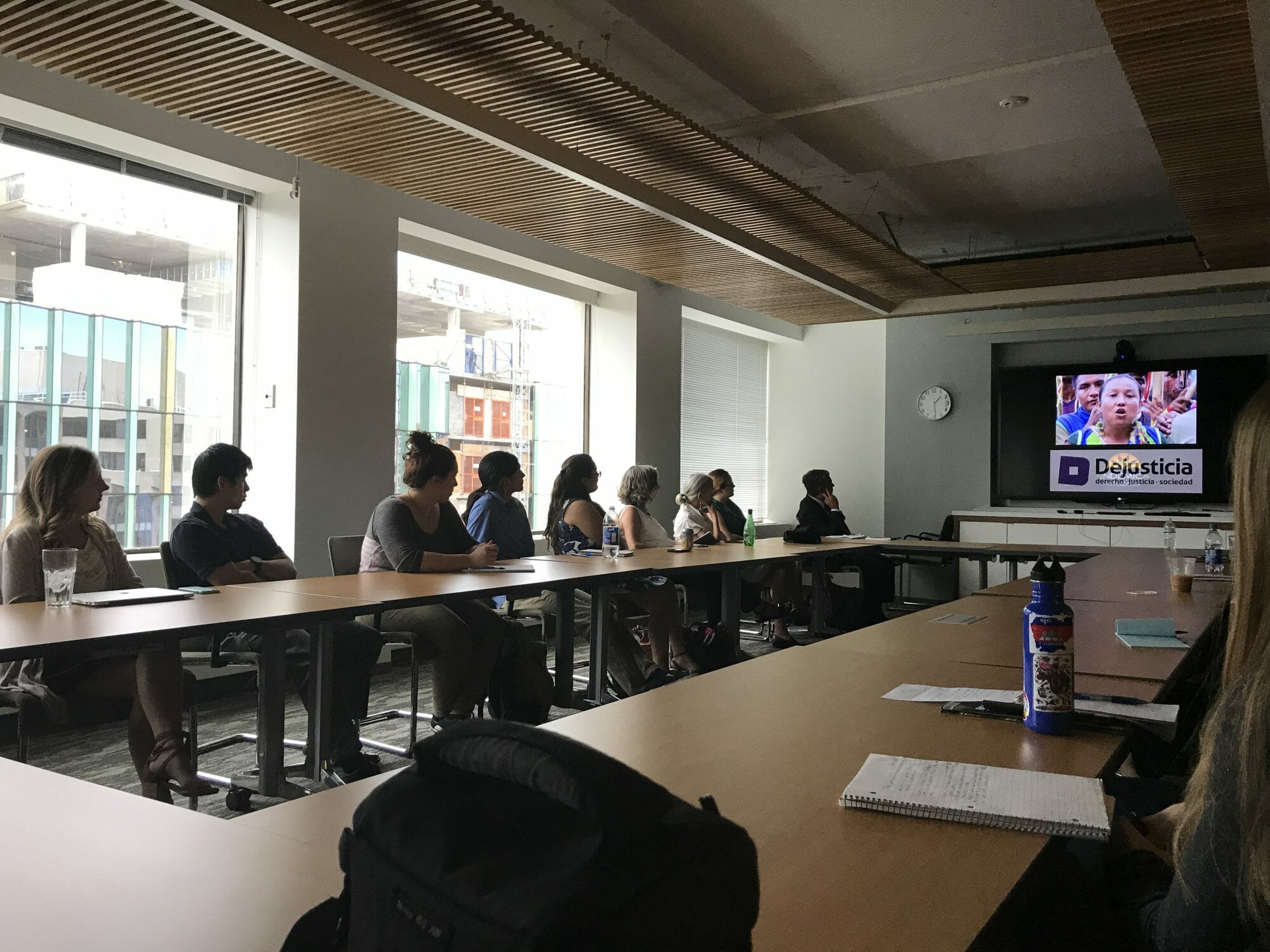 Attendees watch Guardians of the Blue Planet before Aura’s presentation.

Their demonstration of fortitude had a direct impact on the country as it caused a 25 percent increase in gas prices for the Santander region and resulted in international news coverage. They stood united to protect their territory despite being wrongly accused by the government of kidnapping the gas plant workers. They held their batons as peaceful guardians even as the government sent in anti-riot police. They asked themselves why they were being treated like guerillas for a non-violent occupation, while in 2000, the government didn’t hesitate or question the legality of evicting the U’wa and expropriating their land, during which three U’wa children died. After two negotiations with the government, it was agreed that the government would fulfill its original agreement and in return, the U’wa released the gas plant.

As Aura took over the podium, the beautiful hymn played in the video reverberated in my mind with the imagery of the resilient U’wa people united: “with courage and strength in their hearts raising their ceremonial batons in pursuit of justice and survival.”

The U’wa nation follows the path left by their ancestors to defend and protect the earth. Their mission to maintain the balance between the four pillars-earth, water, mountains, and sky-goes beyond protecting their land. They demand that Mother Nature be respected and protected, for all of nature is connected and environmental destruction anywhere is a threat to all communities. In U’wa tradition, water connects the current world with the after world and oil is the blood of Mother Earth which helps maintain the spiritual balance.

Aura’s conviction and enthusiasm transverses more than the desire of the U’wa, but represents communities around the world, which are all brothers to the U’wa. They work in unity with the campesinos of the region to defend the land and resources together so that all can live more peacefully and in harmony with Mother Nature. Their key to success is the international relationships they have formed and Aura described the unity between brothers and the support from partners as a natural equilibrium which creates peace. She has been inspired by other movements around the world, including the Dakota Access Pipeline protests in the U.S.

While the fight continues, it can be difficult to have the resistance and resilience to stay strong day after day, but what renews the strength of Aura and the U’wa people is seeing the global effect of their work and uniting with other activists. Aura pledged that they will continue to fight for their rights and to protect Mother Earth when the Sun does not rise anymore and until the last U’wa is standing.

In Colombia, the U’wa have seen huge successes in blocking Occidental Petroleum from drilling on their land and dismantling Ecopetrol from drilling for natural gas at Magellanes in their territory. These victories are also largely due to their innovative and strong legal strategies that draw upon their culture, western knowledge, international communication and peaceful collectives. Their community, led by the elders, takes part in mobilized action to demand rights and protection of land in order to live in peace.

As the Colombian government and the FARC engage in negotiations and peace talks, the U’wa are demanding that the government honors the agreements from 2014 on rights to territory for campesinos and indigenous groups. The peace deal in Colombia is seen as a huge accomplishment in conflict resolution. However, the U’wa fear this will lead to increased foreign investments and more threats of mega projects. They express that the government needs to take into account the visions of all who participate in civil society, including the campesinos, indigenous and African descendants. They hope that discussion of these topics will be possible in the new talks between the government and the ELN.

What the Future Holds

The U’wa case was a request for 15 years in front of the IACHR until 2015 when it was granted admissibility, allowing the case to move forward in Colombia. As the first case of its kind, it is opening doors for other indigenous cases in the IACHR. The legal strategies and community organization demonstrate that the path is set for others to follow suit in demanding human rights and land rights.

The U’wa’s case is groundbreaking in that it challenges the general law in Latin America that the government owns subsurface resources such as minerals, oil, and gas. The U’wa defend that these resources are inextricable and cannot be separated from their land or conceded. ERI Attorney Marissa Vahlsing, who also spoke at the event, added “the U’wa have the advantage, not only in their conviction but also in their legal strategies.” She described that they have proof of titles from the King of Spain, who originally colonized the region, which recognizes that they own the land that makes up their territories as well as the resources below ground.

The determination of Aura and the U’wa to protect their land, culture, and the environment was tangible during her presentation. She described that with their movement, it is not what you see, but what you feel. The brother communities and indigenous groups around the world may not share the same cultural beliefs as the U’wa, but they strengthen the movement through their shared passion to protect human rights and coexist peacefully with Mother Earth.