Skipping School for a Brighter Future

Around the world, youth are stepping up to demand accountability from the governments and corporations that continue to exacerbate the climate crisis. Last week’s Climate Strikes were a key moment in that movement. Leila Simons, daughter of EarthRights International General Counsel, Marco Simons, reflects here on what motivated her to participate in the event and what she learned there. 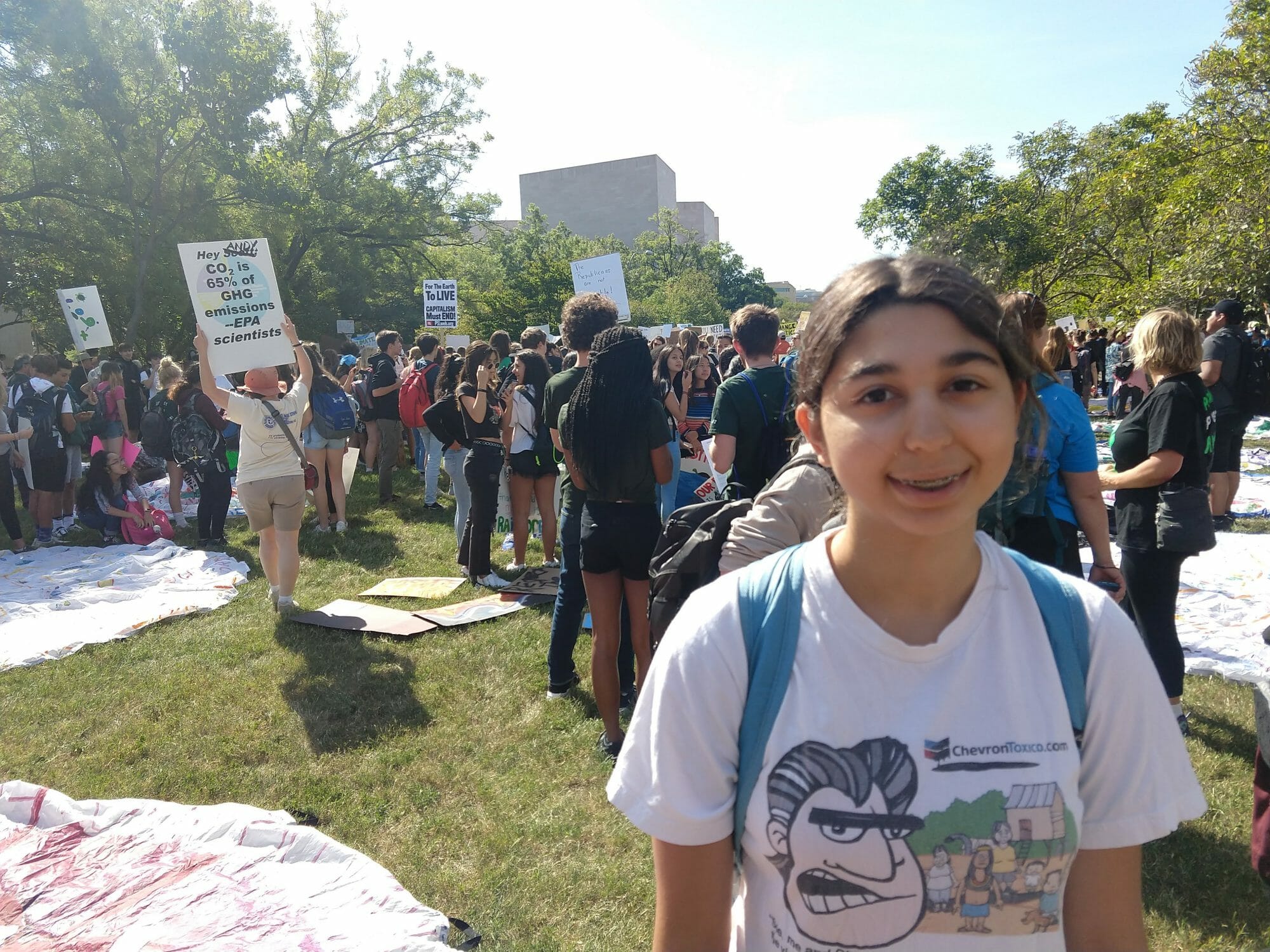 On Friday, September 20th, I wasn’t in school. I attended the Youth Climate Strike, marching to the Capitol Building along with thousands of other people, both adults and kids like myself, to ask the people in charge of the U.S. to give us our future back.

I’m in the eighth grade and all I should be worrying about are high school applications, friends, and homework. I do worry about those things, but I also worry about a much bigger problem–the reason I was at the Climate Strike on Friday, instead of in school. Humanity is destroying our planet. Carbon dioxide levels in the atmosphere are higher than they’ve ever been before, the planet is warming, and we are already experiencing some of the effects of climate change. Hurricanes, droughts, and wildfires have picked up as a result of climate change; sea levels are rising, endangering species such as polar bears and threatening coastal cities. The Arctic could become ice-free in the summer in less than a century. And these problems will only get worse.

When I arrived at the march, I mostly knew about the effects of climate change on sea levels and endangered animals. I had a vague knowledge of how climate change was causing more natural disasters, like hurricanes and wildfires. By the time I came home, I recognized that it is a much larger, intersectional issue.

A lot of people talk about reducing their carbon footprint, but that alone isn’t going to fix climate change. It’s good to do that, but the ones doing the most damage to the planet are the big fossil fuel companies–at the encouragement of the federal government. These companies put profits over everything. Congress needs to pass laws protecting the environment and forcing these companies to drastically reduce or eliminate their carbon emissions. If we want to have a planet to live on in a century, these laws have to be passed, and kids like me can’t pass them. But we can march to ask the people who can pass these laws to do their jobs, and that’s exactly what we did at the Climate Strike.

Some people might say that I, and all the other students who skipped school on Friday, should have been in school. They’re right. We shouldn’t have to skip school and walk up to the Capitol Building to get the people in that building to listen to us and stop selling our futures to fossil fuel companies. We should be in school studying for a future that we’re not going to have unless something is done. We can’t vote, and by the time we’re old enough to fix the problem ourselves, many of the effects of climate change will already be extremely difficult, if not impossible to reverse.

There’s a reason there are so many youth activists–young people are the ones who are going to inherit the Earth, and we don’t want to inherit a flaming, melting planet. So on Friday, I and thousands of students just like me skipped school and marched to the Capitol to demand that the government stop selling our futures and start paying attention to the science and the people. We’re demanding change, and we’re doing it by marching, by forcing them to pay attention to us, and we won’t stop until the government sits up and listens.