Even if the domestic economic growth rate has slowed in the past few years, China’s pursuit of natural resources continues to grow. In 2015, China’s investment to projects in other countries, also known as Outbound Direct Investment, exceeded investment from other countries to China, also known as Inbound Foreign Direct Investment, for the first time. China is leading the foreign investment into Peru’s mining sector and has become heavily involved in Ecuador’s mining and energy sectors. In Asia, Chinese investors also play a big role in the extractive and energy sectors. Recently, the Myanmar-China oil pipeline officially started to operate after a two-year delay. In the meantime, concerns and complaints about Chinese outbound investment have never stopped. This is part of a wider trend of expanding Asian outbound investors, including India, Japan, Korea and Malaysia.

For the China-Myanmar oil and gas pipelines project, CNPC (Chinese State-owned Oil and Gas Corporation and the largest energy company in China) has spent lavishly on CSR programs, which includes building schools and clinics in communities and bringing electricity to the community. However, what is the community feedback from these expensive CSR programs? Firstly, some of the schools have been used for improving students’ environment, but some are abandoned. As for the clinics, CSR did make medical care more convenient for local communities, but due to a lack of doctors, nurses, and medicine, the benefits to local communities are very limited. In terms of accessibility, more often than not, community members still need to travel at their own expense to bigger towns for their medication and treatment. Nobody doubts how expensive these CSR programs are, but that doesn’t mean they bring actual benefits to community development or adequately respond to communities’ needs. In sum: a lack of transparency regarding access to information and public consultation in designing the CSR programs, decision-making without community participation during the implementation process, and a dearth of efficient monitoring while operating the program plague the CSR programs in the pipeline area.

Relative to the benefits brought by the Chinese State-owned Oil and Gas Corporation’s CSR program, the project has had tremendous negative environmental and social costs on the local communities along the pipeline route, which crosses 21 townships in Myanmar. More than 100 villages have been affected. The main problem raised in Myanmar-China Pipeline Watch Committee’s report, and the most significant issue generally, concerns land. The lack of transparency during the land acquisition process gave the local government and businessmen space to act corruptly. Farmers suffered greatly when they lost their land and problems persist today. Some of the villagers still haven’t received any compensation and some of the land that wasn’t appropriated cannot be used properly due to environmental damage. Sand, soil, and other construction materials remain on villagers’ farmland. While the construction of the project brought some short-term job opportunities, when the project officially started to operate, the issues that affect communities’ livelihoods remain unaddressed.

Another concern is climate change, with the scale of the project having the potential to alter the local climate, and the more general phenomenon of global climate change accentuating the existing social and environmental problems with the project. Clean water is a problem in many communities, especially during the dry season of a drought year. Many villagers have complained that the weather has become drier and hotter since CNPC built the project. While the oil sector more generally is the main contributor to global climate change, the localized cause in this case is the removal of trees along the pipeline and the inadequate ecological restoration at the project site.

Since the project began operating, safety concerns have been raised.  Caution signs and signals are not available in the local language, making it nearly impossible for local communities to understand crucial safety information. The local communities are highly concerned about potential industrial accidents, which would have disastrous results. They don’t know how they should respond in a potential emergency situation and desperately need more project information and relevant training.

CNPC’s website includes language publicly committing to sustainable development: “While providing energy products and services, we strive for harmonious relationships between operation and safety, energy and the environment, and corporate and community interests,” and Healthy, Safety and Environmental (HSE): CNPC has always believed that people and the environment are our two most important resources. Therefore, it is one of our top concerns to protect the environment and safeguard the health and safety of our staff.”

Myanmar China Pipeline Watch Committee and other local civil society organizations (CSOs) along the pipeline have tried to meet with the representatives of CNPC based in Mandalay many times, but had been rejected for different reasons. Recently, there have been regular meetings due to the election of NLD. Difficulties in engagement and communication are common problems with Chinese investors. 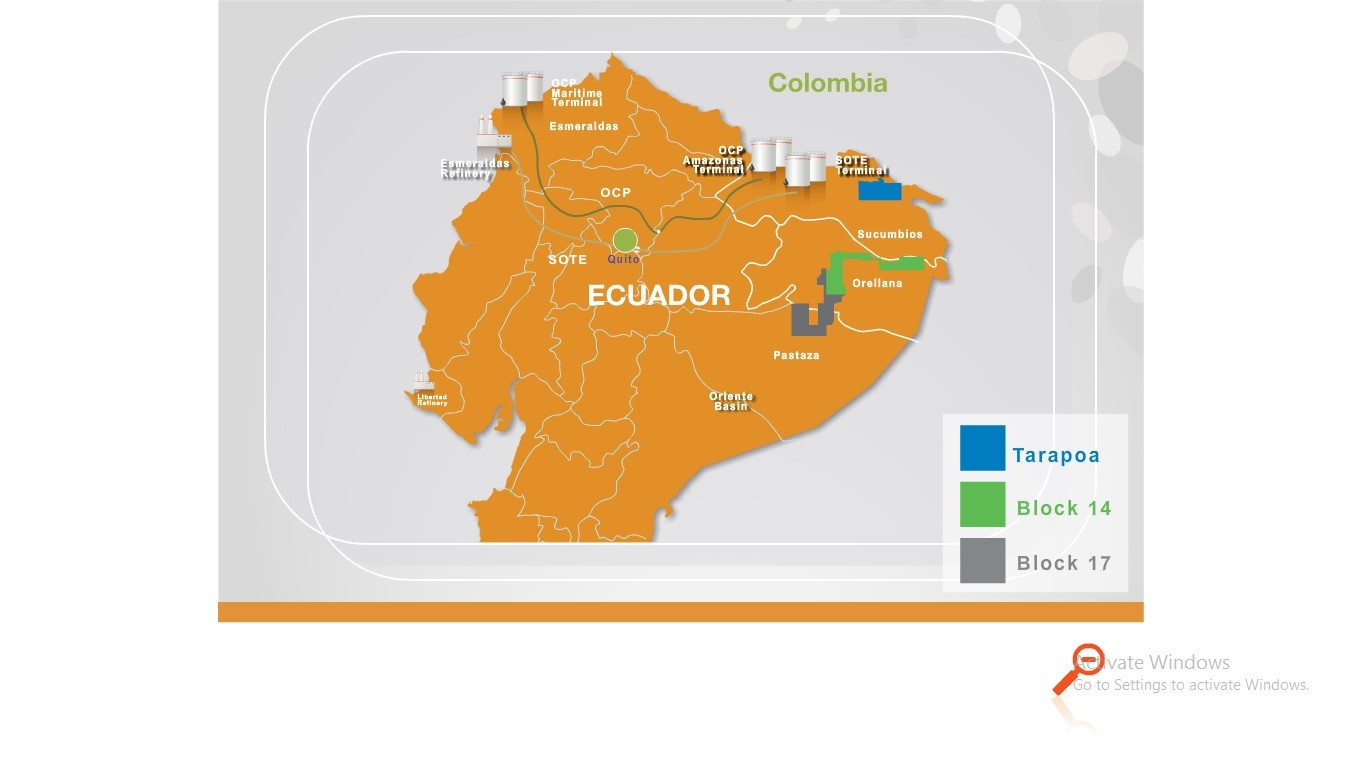 Andes Petroleum Ecuador Ltd. operates in the Tarapoa Block and the Lago Agrio Storage and Transfer Station in the province of Sucumbios. PetroOriental S.A. operates in Blocks 14 and 17 in the province of Orellana and Pastaza. These companies were set up with shareholder capital from state-run corporations of the People’s Republic of China: CNPC, with a 55%, and China Petrochemical Corporation (SINOPEC), at 45%.

The two blocks in the contract are controversial Amazonian oil blocks (also known as block 790 and block 83) that face adamant opposition from local indigenous people living inside the roughly half a million acre concessions and beyond. The two blocks overlap with the territory of the Sápara indigenous people, a small, threatened group of only 300 that has official UNESCO recognition as an “Intangible Cultural Heritage of Humanity.” According to Amazon Watch,

“The two problematic blocks border Yasuní National Park and a government protected area for the nomadic Tagaeri and Taromenane indigenous groups living in voluntary isolation, exacerbating their vulnerability as oil drilling and infrastructure expands north, east, south, and west of them. The blocks also overlap a portion of territory of the Kichwa of Sarayaku, and are upstream from millions of acres indigenous territory. The blocks are in the center of Ecuador’s pristine southeastern Amazon, where indigenous groups have successfully kept oil companies out of their territories for over two decades.”

The indigenous people in this region are strongly opposed to any plans for oil development and vow to resist and stop these projects. They know the environmental and social disaster that oil development will bring.

According to the CNPC, it commits to “obeying the laws and regulations of the countries where we operate and fully respecting local customs. Complete honesty and openness with the public regarding our HSE performance. Consistency in our HSE concepts wherever we are and in all sectors of our business.” Andes Petroleum Ecuador Ltd. and PetroOriental S.A. also claim  “companies dedicated to hydrocarbon exploration and exploitation activities in Ecuador, are fully committed to protecting the environment and providing the best operation conditions for the safety and health of their employees”. It further states:

“Our corporate conduct is defined by equality and transparency, and absolute respect for the State, our shareholders, our employees as well as our neighbors, and the indigenous and settler communities in the Oriente. By maintaining high technological standards, our operations preserve the environment, and especially inhabitants. With this in mind, we have drafted several clear guidelines to be followed in the case of possible contact.“

The company’s website provides little information beyond these flowery commitments; the site lacks information about each project the company operates, the corporate structure and board members, or even general updates.

As a result of the rapid expansion of the Chinese overseas investment, more and more academics, as well as international and local NGOs have started to monitor and engage with Chinese investors. As these two projects in Myanmar and Ecuador demonstrate, for Chinese investors, CSR translates to building schools and clinics and giving donations. But this is insufficient. Both projects discussed in this post have conducted CSR programs but have largely ignored more pressing issues, such as land compensation, safety concerns, environmental issues, indigenous rights, transparency, and climate change.

For now, few Chinese State Owned Enterprises (SOEs) have adopted the UN Global Compact as their policy or established grievance mechanisms, for example. We strongly suggest that CNPC, as one of China’s largest SOEs, adopt and operationalize policies and grievance mechanisms that meet the UN Guiding Principles. This would be a powerful indicator that CNPC takes seriously its role as a responsible international investor, and would go much further than its limited CSR programs have.