A few weeks ago, Benjamin blogged about the Grand March for the Right to Water and Life in Peru. Over 8 days, people marched hundreds of miles from different corners of Peru, sleeping in elementary schools, restaurant floors and fed by townspeople in solidarity with their cause. The marchers finally arrived in Lima, the City of Kings, on the 9th of February, and their journey and demonstrations have come to symbolize a historic moment for social movements and communities affected by mining, showing the country and the world that fundamental changes need to be made in the extractive industries. Two legislative changes are proposed: first, the creation No-go-zones for mining—in particular to prohibit mining in the headwaters of rivers—and second, to protect water sources by making water a human right.

ERI was present to greet the marchers. I was in the public forum, sitting front row next to my friend, colleague and ex-vice minister of the Environment Jose de Echave, whose critique of the Conga project brought about his resignation. We watched and heard the voices of many individuals, leaders and politicians, all sharing their sentiments about mining politics in Peru. In between speeches, we were entertained by the “beauty contest” winner Miss Cerro de Pasco, from the oldest mining town in Peru, which has an open pit mine 2 kilometers wide eating away at local houses. On stage she performed for the audience, telling us all about the special quality of her blood that is full of heavy metals, her lovely town that rations an entire 2 hours of water a day for each family, and the leach pads full of contaminants that tourists can visit. She sarcastically thanked the mining companies for the wonders of her town.

Benjamin was present at the march on February 10 in the Plaza San Martin, a large public space in Lima’s Historic Centre, for the closure of the event that brought together thousands of marchers and their Lima supporters within earshot of the government buildings. A stage was constructed in the plaza as thousands of people gathered around with signs, flags, and costumes to participate in the demonstration. Speakers from Cajarmarca and other regions of the country affected by mining took to the stage to give impassioned speeches, punctuated by chants and songs from the marchers and invited musical acts, including a new song composed just for the event with lyrics, “Agua si, si , si, si , siiiiiiii, Oro no, no, no, no, nooooooo” (“Water yes, yes, yes, yes, yes; gold no, no, no, no noooo”). 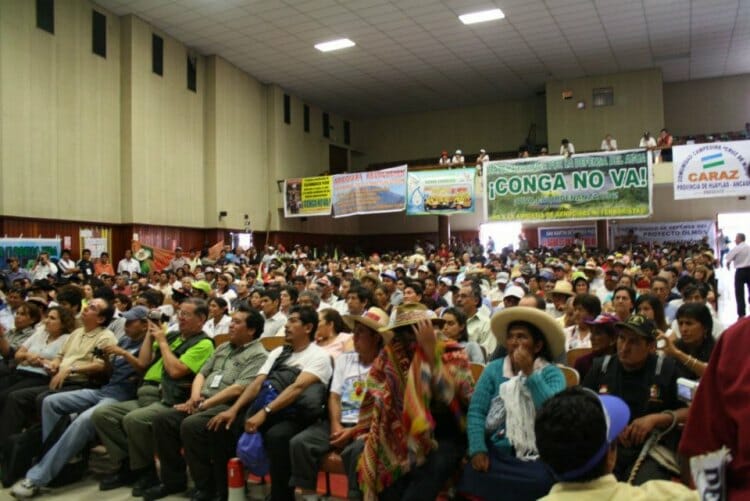 The Grand March for Water and Life is about more than just mining. It’s about the right to participate in the projects that affect our lives, about ensuring that governments and corporations are bound by the rule of law and protections for human rights, and especially, it’s about protecting our water sources for generations to come.