Land, sky and air are for the survival of all living things. Despite that these things are meant for everyone, human beings try to own and divide them in unequal ways. Most indigenous groups face difficulty and put their rights to land because of misunderstandings about indigenous peoples’ lives, social inequality, and the exclusion of indigenous rights in national laws.

The misunderstanding of indigenous life and livelihoods by outsiders often results in discriminating practices. In the eyes of Cambodian governments and the majority of people in my country, indigenous people are destroyers of natural resources. We use traditional knowledge to do rotational farming, which involves cutting the trees and burning them before we plant rice. Indigenous people also hunt and fish. All of these things make outsiders think that indigenous people’s practices are out of date.

Furthermore, most indigenous territories have been designated as national parks in order to protect the forest and biodiversity. From the government and urban people’s perspective, protected areas should not have any people residing in them. Therefore governments often evict indigenous people from their territory and sometimes use violence to kick people out.

The Forest Peoples Programme, an NGO that supports the rights of people who live and depend on forests, reported that three indigenous Karen families had their lands reclaimed by the Thai Royal Forest Department in July 2014, and a further 37 Karen villagers were convicted of encroachment and illegal logging for cutting trees to build their homes in northern Mae Hong Son province in October of the same year.

Joni Odochao, a Karen leader from Baan Nong Tao village in Northern Thailand, said: “Before you talk about destroying the forest, before you designate a national park, you should know about the history of the people. The question is: who came first? We have been here for many hundreds of years, before it became a national park.”

In reality, we indigenous people love our environment and care deeply about it because our lives depend on nature. We have our own knowledge on how to use natural resources in a sustainable way. Indigenous people live in the forest and we have deep knowledge about nature and want outsiders to understand us.

Inequality in society distances people; rich people and poor people, non-indigenous and indigenous people. Those who are most marginalized, including the poor and indigenous people, are the ones excluded from the benefits yet suffer the harms of corporations and capitalism. The desire for profit leads to land grabbing and human rights violations by companies and governments. This situation isn’t unique to Thailand, but is happening to indigenous peoples around the world.

Indigenous people try to call for help and urge governments to respect their rights as human beings. But the government insists that indigenous people are illegally encroaching on land that has led to the destruction of the forest and is causing climate change. But if we look at the real situation, most of the forest destroyers are rich, urban people and companies. These groups own huge amounts of land and in order to profit from this land they clear the forest and cut the trees. The Bangkok Post reported that the four biggest landowners in Thailand control over 904,400 rai (approximately 357,571 acres) of the country.

Furthermore, most rich businessmen also often have a close relationship with the government and politicians. They act in each other’s interest because one needs to secure their power and the other needs to earn money to protect their company’s interest. On the surface, some laws appear to exist to protect nature, to protect the forest. In reality many of these laws violate indigenous rights. For example, Order No. 64/2014 of Thailand enacted by the National Council for Peace and Order (NCPO) was made in order to increase forest cover. However, in the implementation of this law, many of Thailand’s indigenous peoples who live in or near protected forests were forcibly evicted. Many indigenous people understand that laws are written to protect the interests of the rich. Those laws are not for everyone.

Phrue Odochao, a Karen leader and forest-dweller, said, “Because they have money, they have power, and this makes it very difficult for us to claim our right to land. But we don’t give up. We keep fighting to have land rights in order to protect our community.” 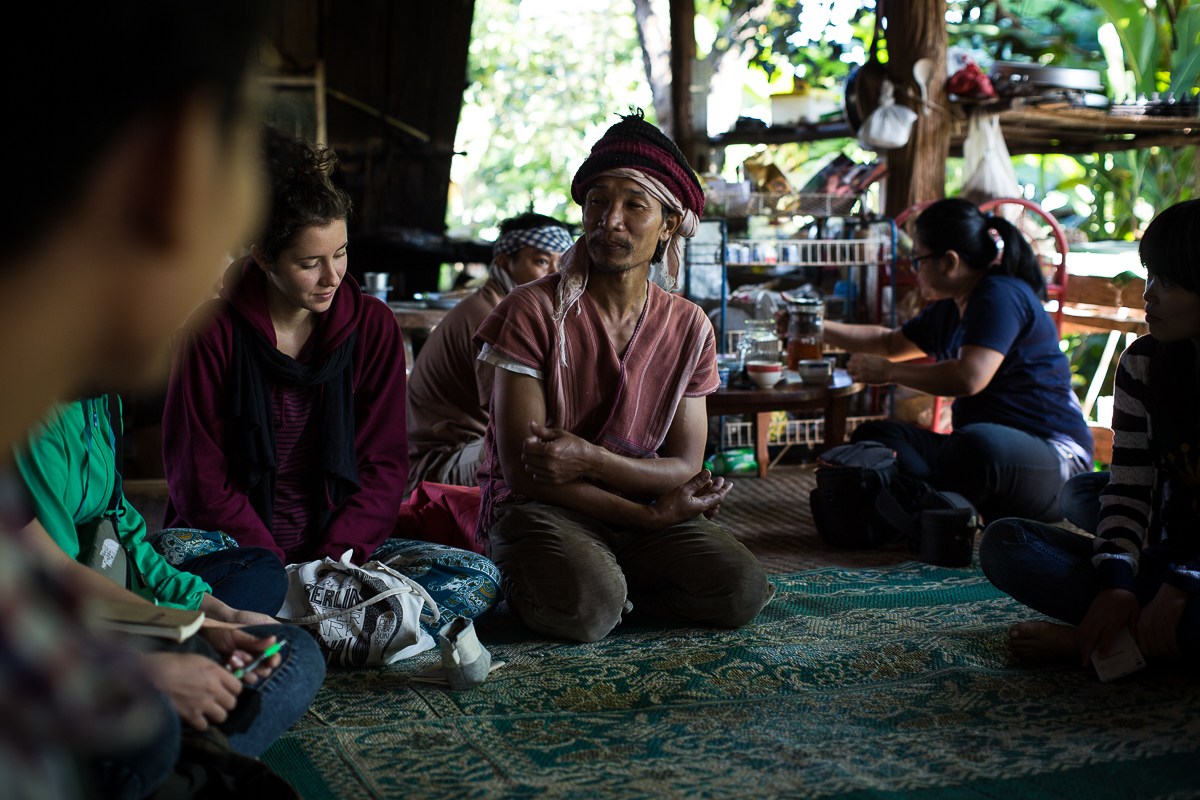 Even in the face of discrimination and power inequality, indigenous people do not lose hope. Karen villagers in Ban Nong Tao village hope that the law can change to protect their rights. They want indigenous people to be able to raise their concerns and have input when laws are drafted and enacted so that the law is a defender, and not a barrier, to secure their rights to land.

Currently, indigenous peoples’ access to land rights still has obstacles. Discrimination and misunderstanding contributes to violations of our human rights, including those protected under the UN Declaration on Human Rights (UDHR) and the UN Declaration on the Rights of Indigenous Peoples (UNDRIP). Inequality in society provides ample opportunity for corporations to expand their greed to destroy the environment and violate indigenous rights, especially rights to land.

In order to build understanding and despite these immense challenges, Phrue Odochao and other Karen people are continuing to campaign and fight for their rights to land and recognition of their sustainable lifestyles. In Phrue Odochao’s words, “I want outsiders to understand our culture. Do we really destroy the forest?”