Home   »   Blog   »   NGOs Make Clear: Corporations will not SLAPP their Critics into Silence

NGOs Make Clear: Corporations will not SLAPP their Critics into Silence

Last week, our Director Katie Redford spoke on a panel in Washington, D.C. alongside Annie Leonard Executive Director, and Deepa Padmanabha, Staff Attorney, for Greenpeace USA, Rachel Meeropol, Staff Attorney for the Center for Constitutional Rights, Kizito Byenkya, Program Coordinator for the Open Society Foundations, and Todd Paglia, Executive Director at Stand.earth to discuss how corporations are deploying the law to threaten those that dare speak against them.

Strategic Litigation Against Public Participation (SLAPP) is a tool used by corporations to intimidate and silence their critics. (Watch Robert Reich break down SLAPP suits in this short video.) These lawsuits pose a great threat to the organizations and activists diligently working to protect human rights and the environment. Corporations that file SLAPP suits are sending a clear message to organizations and activists: If you speak out against us, we’ll take you to court.

The panelists spoke to a full house about how they and their organizations have been impacted by SLAPP suits and asked all of us to mobilize to fight back against these corporations. 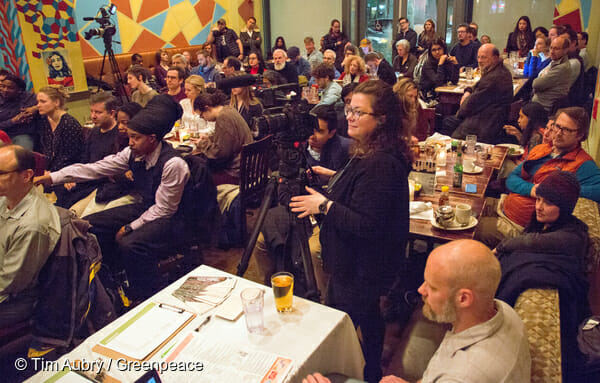 The Center for Constitutional Rights, EarthRights International, Greenpeace USA, Stand.Earth, and Open Society Foundations panelists discuss the ways in which corporations are using SLAPP suits to silence their critics and how we can fight back. Part of the audience for the panel discussion.

“If they’re trying to silence us,” said Annie Leonard, “the best thing we can do is turn up the volume.”

As Katie mentioned in her comments, SLAPP suits by corporations are nothing new, but a time-honored tradition of corporations to wage a war of resources and a war of attrition against activists, including earth rights defenders.  Recently, however, they’ve added even more aggressive tactics to their corporate playbook. When corporations are met with resistance, they seek legal retaliation.

Todd Paglia, CEO of Stand.earth, said that he’d always expected to be harassed and intimidated by corporations and their lawyers, simply due to his work exposing corporations for environmental harm, but he “was never expecting to be sued as part of a criminal network.”

In May 2016, Resolute Forest Products, a Canadian logging company, filed suit against Greenpeace, Stand.earth, and five unnamed activists in the United States under the Racketeer Influenced and Corrupt Organizations Act (RICO) statute. In August 2017, Energy Transfer Partners (ETP), the company responsible for the Dakota Access Pipeline, sued multiple Greenpeace entities and various other organizations in an attempt to chill their advocacy work. ETP, represented by President Trump’s go-to law firm Kasowitz, Benson & Torres LLP, goes as far as to claim that Greenpeace and others engaged in “eco-terrorism” and cost their company $300 million.

And these are just two examples. The lawyers have threatened: more SLAPP suits are coming.

Driven by power and profit, the panel highlighted that corporations don’t file SLAPP suits because they expect to win in court, but do so instead to inconvenience organizations and divert their time and resources to legal defense rather than advocacy.  These lawsuits are a blatant attack on our First Amendment rights to free speech and association, aiming to disrupt the normal operations of activists and organizations who would otherwise be challenging and exposing corporate harms to human rights, civil rights, and the environment.

“The goal is to stop every one of us from doing what we do – which is advocacy,” said Katie Redford. “These lawsuits are not going to weaken us. Our voices are going to get louder.”

Our work has always been and will always be critical, but with corporations feeling emboldened by a friendly administration that’s hostile to those that challenge corporate power, there’s a certain sense of urgency among NGOs from every sector of civil society. It is crucial that we continue to challenge the corporations that seek to pin us into a corner with our hands tied – to silence us. These lawsuits do not only impact the organizations and activists that corporations take to court; these lawsuits impact everyone who values the Constitution and the primacy that we as a nation place on free speech and association.

These abusive lawsuits affect us all.

But there is strength in numbers and solidarity and we are united.