Home   »   Blog   »   Newmont Mining as Champions for Corporate Excellence? We don’t think so.

Newmont Mining as Champions for Corporate Excellence? We don’t think so.

Newmont Mining Corporation (through its subsidiary in Ghana) is being hailed as a leader in corporate excellence, especially for its respect for human rights.

This, of course, seems like the punch line to a bad joke. After all, Newmont received the “Public Eye” award for corporate irresponsibility in 2009, and is better known for accusations of complicity in human rights and environmental abuses. Last year, we helped a Peruvian farmer obtain evidence from Newmont after he was shot in the back while peacefully protesting against a Newmont mine.

Nonetheless, earlier this year Newmont Ghana Gold Limited was nominated as a finalist for the annual Award for Corporate Excellence given by the U.S. State Department, under the “Human Rights and Labor Rights” category. The winner will be announced today.

We wrote the State Department expressing grave concern. Newmont was nominated for its partnerships with private and public security forces to train and equip them in protecting mining operations and respecting the human rights of surrounding communities in Ghana. But Newmont’s human rights and environmental record – whether in Ghana or in Peru, where ERI has extensive experience – is no model for the “exemplary” corporate conduct the award intends to recognize.

Ghanaian communities have also objected strongly to Newmont’s candidacy for the award on the basis of its human rights and environmental record in Ghana. Their letter condemns “military brutalities” and environmental pollution by Newmont.

While “Newmont Ghana” is the nominee this year, Newmont is a globally integrated corporation whose own website does not distinguish between business units in different parts of the globe. Thus operations in other parts of the world, especially Newmont’s record of abuse in Peru, should be taken into consideration.

Last year we made a similar objection to the notion of giving an award to a company for one aspect of its work in one corner of its global operations, without considering the company’s overall record of human rights, environmental, and labor rights responsibility (in that case the company was Chevron). This practice lends support to the outdated and wrongheaded notion that “corporate social responsibility” can somehow offset or be assessed separately from the overall impacts of a corporation’s activities.

Even assuming that Newmont’s partnerships with private and public security forces in Ghana are worthy of praise, the reverse is true in Peru. Although Newmont purports to implement the United Nations Global Compact, the Voluntary Principles on Security and Human Rights and principles from the Universal Declaration of Human Rights, numerous allegations of excessive force against unarmed protestors, unlawful surveillance of environmental defenders, and harassment and intimidation of landowners indicate otherwise. In addition to security and human rights concerns in Peru, Newmont’s global environmental record also bears scrutiny. Throughout the world, including the United States, Newmont has repeatedly been accused of violating environmental regulations.

But that is not all. Last week, Gary J. Goldberg , President and CEO of Newmont, was invited to Peru to be the opening speaker at the 7th Extractive Industries Transparency Initiative (EITI), an international alliance of governments, extractive companies and civil society organizations from 49 countries, with a goal to bring transparency to extractive industries. Newmont is a “supporting company”, so is Chevron, Shell, and BP, just so you know.

In a letter (English/Español) sent to Mr. Goldberg before attending the EITI event, we and 65 other civil society organization in Peru, asked him order the immediate halt to the harassment Máxima Acuña de Chaupe and her family, and that Newmont disclose the responsible parties for the actions, so that they may be held accountable.

Newmont and its Peruvian partner own Minera Yanacocha, a mining company that has been engaging in a systematic and abusive campaign against Máxima Acuña de Chaupe and her family. The Chaupe family are small farmers who have the misfortune to live on land that Yanacocha wants for a new mine. Despite the fact that they won a court case against the company, they have been repeatedly harassed by police and Yanacocha’s security guards.

To hold up a company such as Newmont as a model of corporate excellence, or to give it a platform as a leader in transparency, makes the U.S. State Department complicit in the whitewashing of Newmont’s human rights and environmental record.

We hope that Newmont is getting our message, loud and clear.  Help us spread the word by sharing the following message on social media. 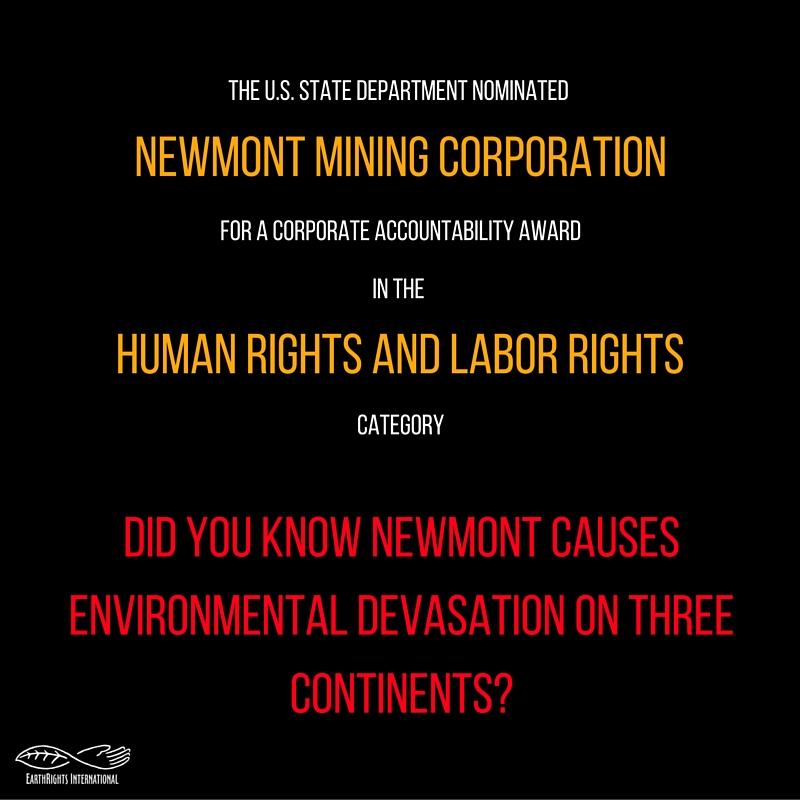 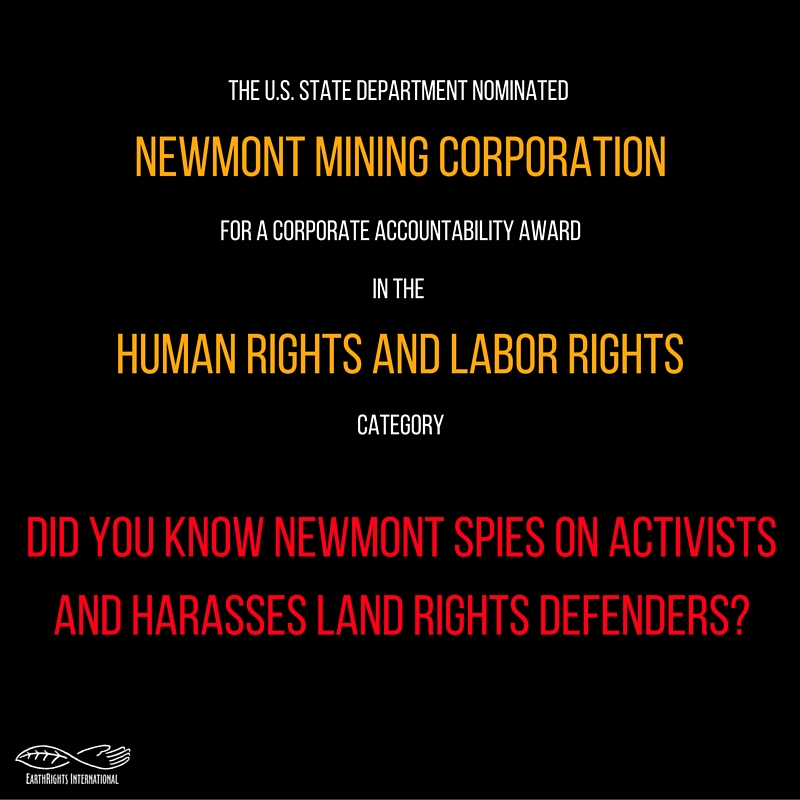