Near Bhopal Disaster Site, Contamination Only Worsens with Time

Last week, as human rights groups in the United States prepared for the pivotal case, Kiobel v. Royal Dutch Shell, to come before the Supreme Court, activists, NGOs and victims in India were similarly appealing to their Supreme Court for redress in a major corporate human and environmental rights matter.  Many of us will recognize the name Union Carbide Corporation and recall its involvement in the Bhopal plant disaster during which is poisonous gas leak claimed the lives of 5,000 people in 1984.  Few of us are aware, however, that the struggle for justice for those who continued to reside in and around the Bhopal plant is anything but over.

In 2004, recognizing that groundwater pollution emanating from the Bhopal plant (which was used to manufacture toxic pesticides) presented serious health risks for the neighboring settlements, the Indian Supreme Court ordered that piped water be supplied to fourteen settlements around the Bhopal site affected by groundwater contamination. Despite that order, NGOs working with communities in the area continued to insist that the groundwater contamination problem was not abating; but rather, worsening, and spreading.

Last week, the Indian Institute of Toxicology Research (IITR) in Lucknow, which had collected 26 samples from around the factory, submitted a report to the Indian Supreme Court stating that toxic chemical waste “left behind by Union Carbide in the factory premises and solar ponds created to dump chemical waste of the factory was said to be causing contamination of underground water due to seepage, particularly during rainy season.”

Even worse, the report found that the contamination had spread from the initial fourteen communities of concern to include four more communities, making for eighteen communities in the vicinity of the Bhopal plant where contamination continues to threaten the health and environs of thousands of people. According to the IITR report, the results of the levels of chlorine and nitrate in the samples were found to be higher than permissible.

This regrettable development does not come as a surprise to ERI, which, since 2004, has helped represent some of these affected communities in two cases before a federal court in New York. Those cases, Sahu I and Sahu II, involve claims for personal injury and property damage by residents living near the former Bhopal plant site, who allege that toxic substances seeped into a ground aquifer, polluting their soil and drinking water supply. In June 2012, a federal district court in New York dismissed their claims and their requests for injunctive relief — a decision which the plaintiffs will appeal in the coming months. 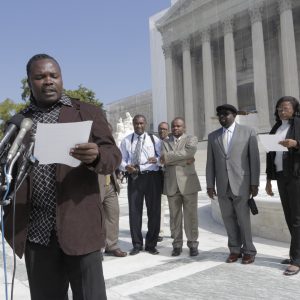 Kiobel, from 8500 Miles Away
Teaching at the Amazon School for Human Rights