From our friends at Leigh Day & Co., a UK law firm that has pioneered transnational human rights litigation in the English courts, comes news that the Monterrico Metals mining company has agreed to compensate 33 Peruvians who alleged that they were tortured by Peruvian police in retaliation for protesting against a mine run by a Monterrico subsidiary.

The plaintiffs argued that their beatings and torture, in August 2005, was part of a strategy of suppression against community protest and opposition to their activities in Peru, and that mine employees and security contractors participated in the abuse.

The settlement is confidential, but in my experience settlements like this–which involve compensation of the victims, and which are publicized by the plaintiffs–are victories.  Corporations know that the settlement will be perceived as an admission of responsibility (even if no formal admission of guilt is included), and so they won’t settle unless there’s a pretty good chance they are going to lose.

So congratulations to Leigh Day, and to their partners at the U.S.-based Environmental Defender Law Center and the Peruvian organizations Fedepaz and the Coordinadora Nacional de Derechos Humanos, for achieving this result, another milestone that will help cement transnational corporate accountability in UK law. 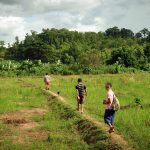 Guest Post: Learning from students on the Thai-Burma border
Chokkobe: A Fragile Childhood on the Salween River