International Day of Action for Rivers in Sambor, Cambodia

International Day of Action for Rivers in Sambor, Cambodia

In Koh Tanoad, Sambor District, Cambodia, EarthRights International, together with youth groups, other NGOs and university students, gathered on the bank of the Mekong River this International Day of Action for Rivers, to show their solidarity with communities who depend on the Mekong.

The gathering included a prayer ceremony, children painting on the Mekong River bank, traditional music, and an activity for the community to share and exchange stories and concerns about the planned Sambor dam.

When asked about the collaboration of local youth and university students from Phnom Pehn at the day’s events, co-organizer Mr. Sotha explained: “The activities are for everyone.  Not just the farmer, but for the people in the city too.  The river is about all of us.”

The planned Sambor Dam will have 2,600 MW in capacity and will be built in one of the three proposed sites in Sambor district, Kratie province. In November 2010, the Cambodian government announced that China Guodian Corporation would carry out feasibility studies for the project’s 465 MW and 2,600 MW options. National Heritage Institute has been conducting a feasibility study. Koh Tanoad, where the event took place, is close to one of the three proposed sites. Studies show that, “the dam would block major fish migrations between Southern Laos and Cambodia Tonle Sap Lake.”

Local farmers and community members shared their thoughts with university students and local youth about the importance of the river: “If the Sambor Dam built, it is going to destroy our livelihoods, and they will need to resettle,” said Mr.Dara*.  Additionally, a local police officer voiced his concern: “If they build the dam without permission from us, I can’t guarantee what will happen to [the company].” Lastly, Vuthy Sem, a EarthRights School Mekong alumnus who led the gathering on March 14th said: “We gather here in Sambor as a symbol of solidarity. The other purpose is to raise the community’s concerns and awareness about rivers,  and the connection between people and their lives.”

Vuthy Sem is an experienced community organizer.  In his work, he partners with local community networks and NGOs in Sambor district and Cambodia, more broadly, to promote community rights to natural resources. EarthRights Schools provide training for community leaders and local activists from the Mekong countries and Myanmar.

The day’s events concluded with a traditional Cambodian blessing ceremony for the river.  A monk from Wat Sosor Muay Roy, who participated in the blessing ceremony proclaimed: “the river gives us everything we need, the Mekong River is our Mother.”

*names have been changed for their security. 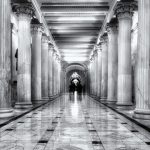 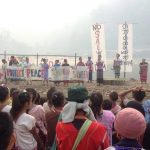