For Love and Land: The Anti-Coal Blockade in Ban Haeng, Thailand

Home / Blog / For Love and Land: The Anti-Coal Blockade in Ban Haeng, Thailand

For Love and Land: The Anti-Coal Blockade in Ban Haeng, Thailand

This page of my diary during my Human Rights Storytellinginternship at ERI is from a field trip with the EarthRights School students to a village where women lead a campaign to stop a coal mine and men farm. The village is in Lampang province, Thailand, and it is surrounded by hundreds of acres of farmland. There are also many deposits of lignite coal around the village, one of the dirtiest fossil fuels. When we arrived there, many people were waiting to welcome us and cook a special meal for us. We were welcomed to Ban Haeng village.

As soon as we arrived, the students met with the village chief and campaign leaders to learn about how the community has organized to oppose coal mining. An energy company—Green Yellow Co. Ltd.—came to Ban Haeng to start coal mining about eight years ago. In 2015, the company got a concession from the government but the villagers didn’t accept it: they knew that coal mining could destroy their land. The company also needs agreement from local people. If the company does mining, we might not see the beautiful and healthy village as we do today. The coal mine would destroy the land, water, and the air the villagers depend on. Although they have been living there for more than four hundred years, the villagers don’t have land titles. Much of the land that has traditionally belonged to the villagers in Ban Haeng is marked as a forest reservation area by the government but this won’t stop the mine.

The villagers have learned from the nearby village of Mae Moh, where the biggest coal project in Thailand is: we saw the Mae Moh plant and mine on the way to Ban Haeng. Many villagers in Mae Moh have cancer and some have died. In the end, the whole village was sadly relocated to another place where they don’t really enjoy living. They are far away from the coal plant but also from their old homes and have had to consistently fight for remedies and compensation.

So far, the campaign against the coal company in Ban Haeng has been incredibly successful and is led by women. Men have to work at farm so women have more free time than men to campaign. The women’s campaign is effective: the company hasn’t even entered the village. The villagers have set up six checkpoints, one in every corner of the village and on the way to their farms and coal deposit areas, so that the company will be seen if they come in any time. The Ban Haeng villagers strongly deny the company entry whenever they try to pass through the village in order to reach the mining area. They call this a “spider net strategy.”  Seventeen villagers per day take duty at all checkpoints. Men are busy working at the farms but they participate in an equal way to the women, guarding the checkpoints at night.

After meeting and having dinner with villagers, most of our group went to homestays for the night. But my group of four men and some villagers slept and kept watch at the biggest checkpoint, near to the coal company office at one entrance to the village. There was no wall at that checkpoint but there were fields, and those fields, along with a TV, securely protected us. We watched the Southeast Asian Games for a while with the villagers. I slept early, tired from the whole day, but the villagers stayed awake all night, cooking chicken at 2 AM, taking care of the village.

Their land is like a mother to them. They are deeply in love with the natural world and depend on their environment. Their environment provides them everything they need for daily life. Foods are everywhere around the village.

The villagers in Ban Haeng all have two dreams: one dream for their individual goals and personal interests, and another dream, which all are chasing, to maintain their beloved land. To lose their land would be like losing a family member who they really love. It is because they are working for love on their land that the community is so strongly organized.

The main thing I learned from this community is that we have to work with love and joy: that is what gives us strength and peacefulness in life. Although we may have knowledge, we need love and mercy to give in order to build the world we want to see. I hope no one takes the Ban Haeng villagers’ love away from them, and that the next time I write about them in my diary, it can be about how they are living peacefully.

Zau Myit Ding Hkalik is a Human Rights Storytelling Intern at ERI, working on Faces of Change. Zau is a student at Kachinland School of Arts and Sciences, from Kachin State, Myanmar. 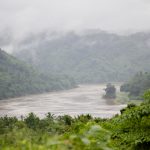 Are Multilateral Development Banks Respecting the Rights of Indigenous Peoples in Development?

From the Amazon to the Mekong: Celebrating Rivers for World Rivers Day