Environmental Rights as Human Rights in the Lower Mekong Basin

Environmental Rights as Human Rights in the Lower Mekong Basin

The way modern society has developed has led to an unfortunate state of affairs where environmental protection and social benefits are often seen as competing interests which have to be balanced against one another.  However, as the mission of EarthRights so clearly implies, in many cases environmental law and human rights law go hand in hand.  As Marissa emphatically reminded us at a recent meeting, environmental rights are human rights!

The ongoing concern surrounding the development of hydropower on the Mekong River in Southeast Asia is a perfect example of the undeniable link between human and environmental rights.  The Mekong River offers vital life support to 65 million people living in the region.  It is also home to over one thousand species and is second only to the Amazon River in terms of biodiversity.  Its rich biodiversity includes the giant catfish , which can reach up to 10(!) feet in length and the Irrawaddy Dolphin , just to name a few.

Unfortunately, corporations and governments also see it as a prime location for hydropower mega-dams.  While some might see this situation as the classic tension between social and environmental benefit, it really isn’t.  Instead, it is much more an example of the increasingly frequent struggle between human and environmental rights on one side and corporations and governments on the other.

Local and international groups including human rights and environmental NGOs have been working together to use various means in an attempt to ensure that these mega-dam projects do not go forward unless they have taken into account and properly addressed the social and environmental costs of the dams.

One result of these efforts was a complaint to the Finnish National Contact Point (NCP) for the OECD  Guidelines for Multinational Enterprises.  The complaint, filed last year, was about the Finnish consulting firm Pöyry Group’s involvement in the Xayaburi Dam.  The OECD’s mission is to promote policies which “improve the economic and social well-being of people around the world” by setting international standards.  The Guidelines are voluntary principles and standards on business conduct addressed by governments to multinational enterprises.  They include conduct relating to human rights and the environment.  Each participating country has an NCP who accept complaints from people and communities who believe that they’ve been affected by a company that’s not abiding by the Guidelines.  The NCPs then try to mediate the dispute and publish their findings on the case.

In the case of Pöyry Group, the complaint focused on the firm’s report which found the Xayaburi dam project to be “principally in compliance” with regional international consultation requirements.  With its scientific shortcomings and inconsistencies, the report seemed like an attempt to “green-wash” the project.  While the Finnish NCP determined that Pöyry did not violate the Guidelines, it specifically held that the OECD Guidelines do apply to companies like Pöyry who are participants in a project, although not the final decision-makers.  That means that all companies connected to human rights and environmental abuses through business relationships, including consultants and suppliers, are expected to take some responsibility for the impacts of those abuses.

A number of affected Thai community and environmental groups have also filed suit against state organizations complicit in the building of the Xayaburi dam.

If this dam is completed (10% of the construction is already finished), ten more dams on the mainstream Mekong below China will almost certainly follow.

The effects of these dams on the region will be far-reaching.  As Maureen said in a recent blog post, it will be extremely difficult to replace the nutritional benefits of the food currently obtained by millions of people through fish consumption and other food sources which are dependent on the river.  The dams will significantly limit these nutritional resources.  The dams will directly interfere with fish migration and the disbursement of nutrient-rich sediment downriver.  Many of the River’s already endangered giant fish species populations will be severely reduced, if not completely destroyed, by these dams.

On top of these effects, the Xayaburi dam alone will cause the official relocation of several thousand people away from the river upon which their lives are heavily dependent.

This is a clear example of corporate and government interests being allowed to outweigh social and environmental concerns.  When it comes to these mega-dams the social and environmental interests are not in tension with one another: protect the incredibly diverse Mekong, protect the millions of people whose lives depend on it.  Or, generate electricity for Thailand (Thailand has agreed to purchase 95% of the electricity produced by the Xayaburi dam) and money for Lao PDR’s government.  Especially given that Thailand  might not even need the electricity—a study last year said that Thailand does not have to import power but could rely on renewable energy and power decentralization—it seems like a pretty easy decision to me.

This guest post was contributed by Rachel Kincaid, a rising second-year law student at the University of Virginia School of Law. Rachel is currently interning with our legal team and is interested in human rights and environmental law, especially in relation to indigenous communities. 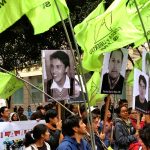