BankTrack is a small NGO based in the Netherlands, whose eight staff members campaign to stop private banks from financing projects that are terrible for human rights and the environment, and to make their financing operations more sustainable.

Energy Transfer Partners (ETP) is the multi-billion-dollar Texas-based pipeline company that is developing the Dakota Access Pipeline (DAPL), opposed by indigenous groups and their allies in the historic Standing Rock protests.

As it often does, BankTrack wrote a few letters to international banks cautioning them against financing DAPL. And then ETP hit it with a $900 million lawsuit.

This is part of the new corporate playbook, filing baseless lawsuits against NGO critics. ETP is getting an assist from Donald Trump’s longtime lawyer, Marc Kasowitz. Kasowitz’s first lawsuit of this type was for a Canadian timber company, Resolute Forest Products, against Greenpeace. ERI assisted in Greenpeace’s defense, and a federal court dismissed that case in October.

The ETP lawsuit against BankTrack is no less ridiculous than Resolute’s lawsuit, and we’re proud to be supporting BankTrack in its defense here. (ETP also sued Greenpeace in this case.) ETP claims that the acts of protest against DAPL cost it $300 million, which – under the federal RICO statute – can be trebled, for a total of $900 million in damages. But that’s not even the crazy part. The crazy part is the notion that BankTrack, which simply wrote some letters to banks – conduct that is clearly protected by the First Amendment – is responsible for every act of protest, including alleged crimes, against DAPL.

ETP and Kasowitz see a vast NGO conspiracy, apparently unable to grasp the notion that NGOs are chiefly populated by people who believe in the work they are doing, so that explaining their tactics and their choice to focus on a particular campaign does not require some nefarious, all-encompassing conspiracy.

This week, we assisted BankTrack and its principal lawyer, Robin Martinez, in moving to dismiss ETP’s lawsuit. But even if the lawsuit is dismissed – as it should be – it still causes damage. BankTrack has to divert its time and resources into defending a baseless lawsuit (as does Greenpeace). ERI’s lawyers take time out of their other cases to assist in this defense. Robin diverts his attention from important legal work like opposing the Keystone XL pipeline.

We need stronger disincentives for companies – and lawyers like Kasowitz – who file these types of lawsuits. Attempts at using the legal system to intimidate advocates and NGOs should not be tolerated. BankTrack won’t be dissuaded from doing its work, but some activists might be – especially those who may not have the resources to respond to such legal threats. Lawyers, in particular, are only supposed to bring “meritorious” lawsuits. It’s hard to see how anyone could believe that the ETP lawsuit has any merit. 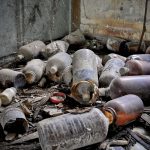 Bhopal Disaster after 33 Years: No Justice, No Relief.