Home > Blog > Courage and Solidarity at the EarthRights School Myanmar

Courage and Solidarity at the EarthRights School Myanmar

A woman pulled the sliding door open, and I drove inside. I parked my motorbike, left my shoes at the door and stepped into the classroom, where everyone was seated in a large circle. This would be my ﬁrst time meeting the students, a young group who had arrived in Thailand two weeks prior and had just completed their seven day orientation. They came from six different Myanmar states to join the EarthRights School Myanmar, an intensive training in campaigning and advocacy for human rights and the environment, focused on the most urgent issues in their own communities.

I’d been hearing about this group all week, having arrived in Chiang Mai just four days earlier to start my new position as ERI’s Human Rights Storyteller. I’d spent the week in meetings, learning about ERI’s programs from the legal, campaigns, and training teams. Each team had briefed me on their current projects supporting the human rights and environmental movements in Myanmar and the Mekong region.

Hour by hour, I’d learned about the devastating realities that communities in these areas are facing. Wading through pages upon pages of assorted notes, scribbled diagrams, memos and legal briefs, the message was clear: there is a lot of work to be done.

So I was excited to meet this group of students who were here to expand their role in this work. Having heard all week about the corrupt governments and massive corporations they will be up against, I was impressed by the enthusiasm and optimism that flowed through the room that night.

After Billy and Nyein Tun, from the school staff, welcomed their students and our fellow colleagues to the celebration, the evening commenced with music and dances performed by the students, drawing from their own traditions but emphasizing a sense of togetherness.

When the performances were ﬁnished, we ate a feast and chatted in small groups until we hit our respective communication barriers (they were only a week into their intensive English course), at which point words were replaced with gesturing and giggling.

I later spoke with several staff about the new students. Each of them reiterated what was already so apparent: the students’ sense of obligation to make change was matched only by their optimism.

They are a group that is open and honest, and I was surprised at how eagerly they shared their own personal histories and the injustices they had faced in their own lives, the stories which had driven them to apply to the EarthRights School Myanmar.

As the night wound down, conversations made up of inexperienced but determined English voiced hopes for the upcoming months: goals of improving their English and report writing and making changes in their home towns. Voices of agreement echoed one another in the now dark courtyard. As each goal was shouted out, it planted itself within me and ignited a bit of inspiration I did not realize was there.

That is what this time at the school is about, Billy tells me. It is a time for the students to process the stresses they have been harboring, to unlock all of their potential. Over these next 7 months they will experience all of this together, building among themselves a network of courage and solidarity. They will return to their communities prepared to create positive change.

I left the school that night feeling inspired.  It is a powerful thing to be surrounded by students so genuinely passionate about defending human and earth rights, so willing to take the risks necessary, and so eager to work hard to protect their communities.  I can’t wait to see what they are capable of, as the year unfolds. 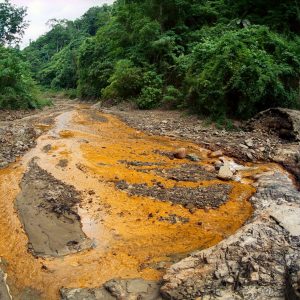 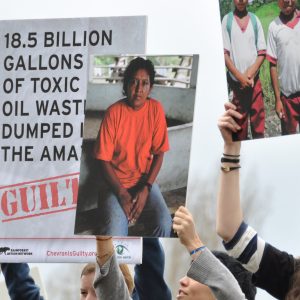 The Unnecessary Truth: Reflections on What Wasn’t Told in the Chevron Ecuador RICO Case