Every day, human rights defenders around the world risk their lives to stand up against injustice. Whether investigating government abuse in Syria or Russia, or exposing corporate abuse in Nigeria or Ecuador, brave individuals everywhere depend on fundamental rights of free speech to do their work.   The United States has always celebrated such rights as vital to our democracy—after all, there is a reason that the First Amendment came first.  Yet recent trends, bolstered by a series of federal and Supreme Court cases, have privileged the free speech rights of corporations while silencing the living, breathing human beings that need those rights most.

It’s certainly no news that today’s corporations enjoy unprecedented global power.  Likewise, the corporate lobby’s campaign to stifle human rights activism has been steadily increasing.  Since Citizens United, which extended First Amendment rights to corporations as “persons”, we’ve seen bold legal arguments against laws and regulations that would hold them accountable to fundamental human rights law.  This year, for example, the Supreme Court held in Kiobel v. Shell that Nigerian survivors of torture and crimes against humanity could not seek justice against Shell in U.S. Courts.  The “mere corporate presence” of Shell in the U.S. was not enough for the Court to allow the plaintiffs—lawful residents of the U.S.—to bring their case.  Courtroom doors that have been open to the world’s powerless for over 30 years are now closing thanks to a concerted effort by the most powerful.

Yesterday, the Supreme Court heard arguments in a case that could push this dangerous precedent even further.  Largely outside the radar of the human rights community, DaimlerChrysler AG v. Bauman arises out of the company’s alleged participation in targeting labor activists in Argentina’s Dirty War, a period of terror that involved the murder, torture and disappearances of thousands of activists and political dissidents.  The allegations are chilling: Mercedes-Benz Argentina identified workers within its plant as “subversives” to state security forces, knowing full well that, as a result, those workers would be abducted, tortured, murdered or “disappeared”.   Equally chilling is the prospect that the Supreme Court will enshrine corporate rights over human rights in law once again.   Like Shell in Kiobel, the question is whether the German company is legally present in the U.S. for purposes of jurisdiction.  Daimler says that it has a constitutional right to be treated separate from its subsidiaries.  Where that right exists in the constitution is up to anyone’s imagination.

Unfortunately, it’s not just the Supreme Court that’s privileging corporate rights over human rights.  The American Petroleum Institute (API) sued the Securities and Exchange Commission (SEC) earlier this year, arguing a First Amendment right to make secret payments to foreign governments.  The case concerned Section 1504 of the Dodd-Frank Act which would require oil, gas and mining companies to disclose the payments they make to foreign governments, making this information available to the people living in resource-rich countries for the first time.  Such transparency regulations prevents corruption and promotes human rights, not least access to vital information that citizens in resource-rich countries require to demand accountability from their own governments.  Yet the API argued that the First Amendment allows them to conceal such payments, and the SEC is now revising their rule.

Finally, we have seen the rise in SLAPP (Strategic Litigation Against Public Participation) suits by corporate defendants against the human rights attorneys and NGOs that have advocated against them.  Perhaps the most extreme, but certainly not the only, example of this has been the tactics that Chevron has employed this year against all advocates criticizing their human rights and environmental abuses in Ecuador.  Faced with an $18 billion judgment against it for environmental devastation in the Amazon, Chevron has relentlessly targeted the organizations, lawyers, journalists and activists who have campaigned or publicly spoken out about the company’s destructive operations in Ecuador.  In spite of sanctions and other judicial admonishments, Chevron’s lawyers have continued to SLAPP activists with harassing subpoenas and depositions, undoubtedly aimed at chilling the future First Amendment activity that makes their company look bad.  EarthRights has defended these organizations, like Amazon Watch, but in spite of successful defense, Chevron’s legal machine continues these abusive practices.

Sadly, these cases are not new or unique.  Human rights advocates have always faced an uphill battle, especially when taking on corporate abuse.  What is new is the way in which our highest courts are privileging corporations and their rights over those of actual human beings.  SLAPP suits and corporate tactics aimed at discouraging human rights advocates from speaking out and demanding justice are time-tested.  But the aggressiveness and vigor with which Chevron has been allowed to pursue such tactics is new, and other corporations are following suit.

We must ask ourselves this question:  How can we speak truth to power when those with power have more rights to speak?

Whose First Amendment Rights are these Anyway? 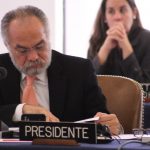