The Ban Chaung coal mine, built and operated by Thai developers in the Tanintharyi Region of Myanmar, is fraught with allegations of land grabbing, environmental pollution, and severe health impacts for people living in the area. The affected communities filed a complaint with the National Human Rights Commission of Thailand (NHRCT) in June 2017. The complaint alleged violations of several human rights, including the rights to health, living in a good environment, and access to remedies. The project may be impacting as many as 16,000 people.

Last week, Pe Tha Law, a representative from Tarkapaw Youth Organization, the civil society organization supporting the Ban Chaung communities in filing their complaint, brought the issue of the Ban Chaung mine to a discussion of Thai outbound investments at the 2017 United Nations Forum on Business and Human Rights in Geneva.*

“Due to the lack of a clear process and mechanism to ensure remedies, the Ban Chaung affected people have been awaiting appropriate compensation and remedies for years,” said Pe Tha Law.

The fact that the Ban Chaung communities sought remedies through the NHRCT – a non-judicial mechanism – shows that the accountability system is broken. There is a pressing need to establish a comprehensive accountability mechanism to ensure that Thai investors comply with human rights principles and provided remedies in the case of rights violations.

Together with Professor Surya Deva, Chair of the United Nations Working Group on Business and Human Rights (UNWG), the discussion participants worked to develop concrete steps that would address adverse human rights and environmental impacts of Thai investments abroad.

Conversations in Geneva highlighted the case of the Ban Chaung mine because it demonstrates issues common among Thai-backed projects abroad. To date, there are three Thai-backed extractive projects operating in Myanmar’s Tanintharyi region: Heinda tin mine, Dawei Special Economic Zone, and Ban Chaung coal mine. Ban Chaung is an open-pit mine developed by three Thai companies: Energy Earth PCL, East Star Company and Thai Asset Mining Company. They were some of the first companies to enter the country in 2012 to pioneer Thai outbound investment projects after the ceasefire agreement in Myanmar.

The development of the open-pit mine has been met with several complaints by the local community about illegal seizure of land, lack of consultation with communities, damages to livelihoods and other issues. Villagers are also citing health problems including illness, dizziness, and skin disease. These issues may have first been caused by illegal dumping of toxic mining waste into water sources. But since coal at the mine began to burn in 2015, these issues have worsened as spontaneous combustion of the lignite coal stockpile releases foul smelling toxic fumes.

The NHRCT recommended that the companies set up a mechanism to engage the affected communities directly in a process to remedy these issues right away. The NHRCT asked the developers to demonstrate practices of sustainable mining that comply with international standards and Myanmar’s domestic environmental and responsible investment laws. A main recommendation from the NHRCT is that the companies must engage the affected communities directly and stop mining operations that cause environmental and social impacts until measures are put in place to avoid future harms. 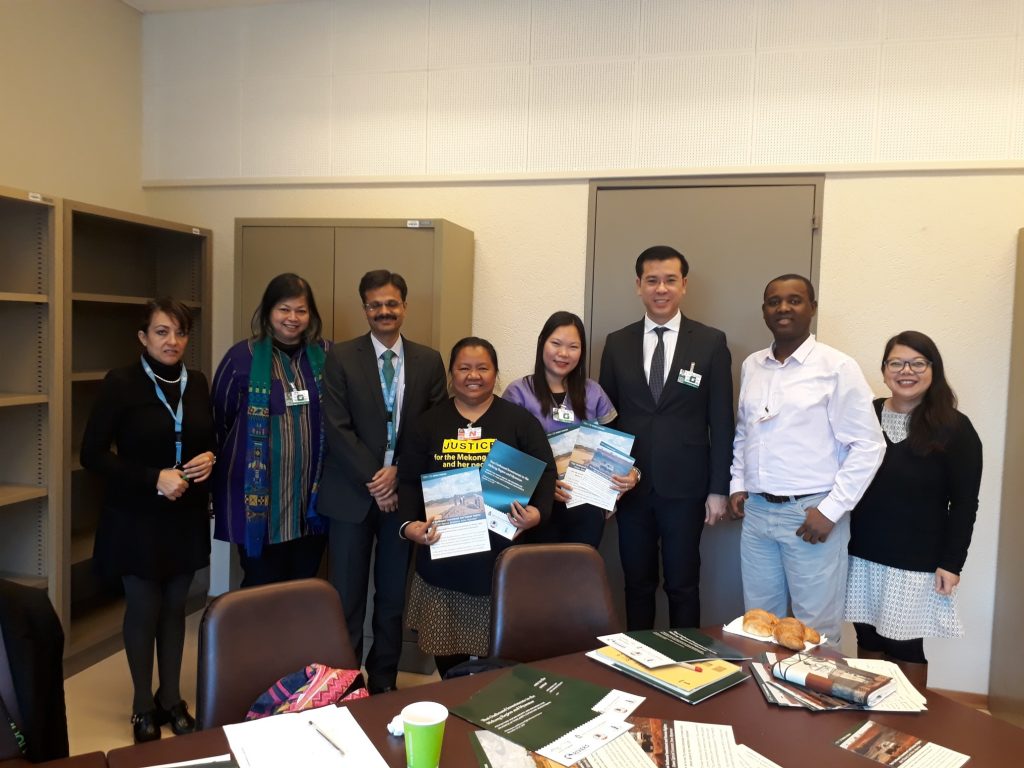 Leaders in business and human rights discuss Thai outbound investment and accountability at the UN Forum in Geneva.

The conversation on Thai outbound investment reaches the international stage

The event at the UN Forum acknowledged the pressing need for host countries such as Myanmar to develop sustainable investment guidelines for regulating foreign investors. These guidelines would specify what companies must do in order to comply with domestic legislation and international human rights standards. In addition, the guidelines would enshrine the principles of ‘do no harm’ to others and due diligence, including respect for the communities’ rights to remedies.

The conversation in Geneva on Thai investments also highlighted how any remedies in cases of rights violations must meet communities’ needs. The Ban Chaung communities, for example, have suffered from a range of impacts, so remedies must meet a diverse range of needs; those whose land has been destroyed may prefer compensation that differs from those whose betel nut plantations were destroyed and those who are impacted by the toxic fumes. Remediation may also include a commitment from the company not to cause further harm. According to the UNWG’s report in October 2017, this is a fundamental component of effective remedies: that a remedy mechanism incorporates the different needs of the affected communities. The project should also be halted until developers provide these remedies.

Other key recommendations for Thai investors operating abroad include adopting the United Nations Guiding Principles on Business and Human Rights (UNGP) and conducting a human rights impact assessment at an early stage of the investment. 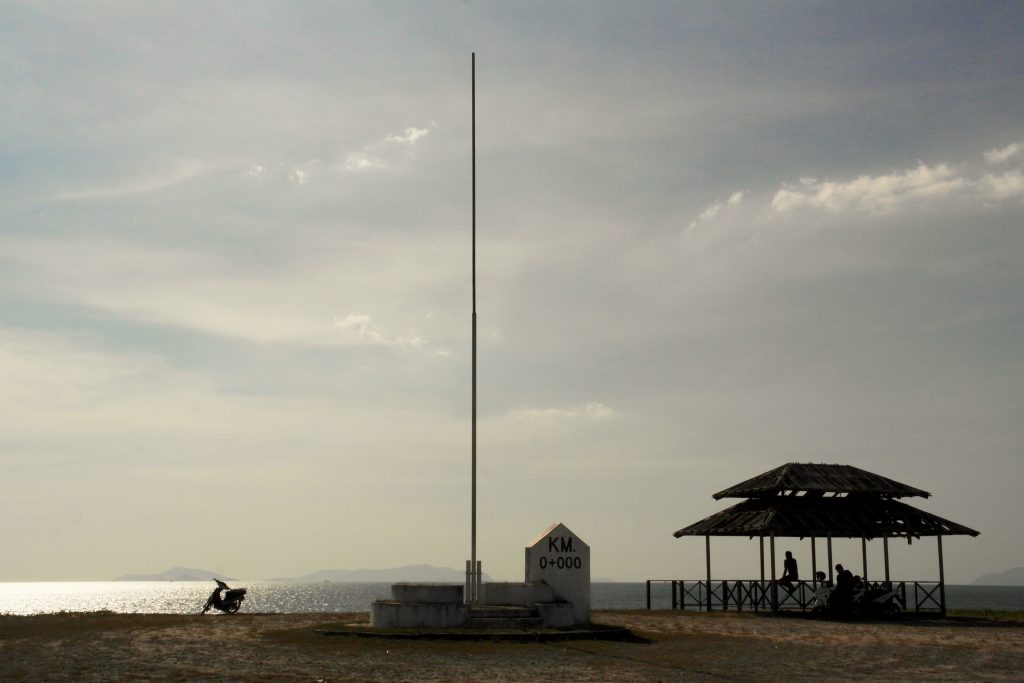 Dawei Special Economic Zone in Myanmar has been investigated by the National Human Rights Commission of Thailand for rights violations committed by Thai developers.

The case of Ban Chaung in Myanmar mirrors experiences of communities living in Cambodia who have faced large-scale land concessions for sugarcane plantations and communities in Lao PDR still facing the construction of dams on the Mekong River. Common issues among these Thai investments are land grabbing, forced eviction, adverse impacts to livelihoods, health impacts, and human rights violations.

Khonkaen Sugar Company Limited (KSL) and Mithrphol are well-known international sugar suppliers operating in Cambodia. While KSL invested in Koh Kong province, Mithrphol pursued plantations in the western province of Oddar Meancheay. Those affected by these projects sent complaints to the NHRCT with support from domestic and international NGOs, including the Clean Sugar Campaign Coalition. Former Commissioner of the NHRCT Dr. Nirun Phitakwatchara took the lead in the investigation of both cases, basing his process on the active participation of the affected people and concerned NGOs. As a result, recommendations were issued to the investors to set up a remediation process, and to responsible government ministries in Thailand to create a mechanism for regulating the practices of Thai investors abroad.

Additionally, the NHRCT has carried out investigations of at least two more projects: Dawei Special Economic Zone in Myanmar and power transmission lines from the Hongsa power plant in Laos. This series of investigations led to recommendations from the NHRCT that are similar to those from the Cambodian cases: to the Thai Cabinet, asking that they establish domestic mechanisms to monitor and regulate Thai investments abroad and to ensure that business conduct due diligence.

The Thai Cabinet endorsed many ideas from the NHRCT’s recommendations when it released a resolution on Thai investment abroad in May 2016. It sets out key recommendations to Thai investors to adopt practices that protect human rights as stipulated in the UNGPs. 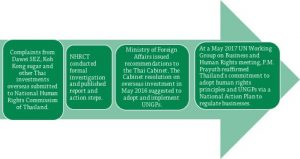 *Work on the case of the Ban Chaung coal mine is led by Inclusive Development International, Tarkapaw Youth Organization and Spirit in Education Movement.