Oil companies distort the truth by spending billions of dollars on misleading advertising campaigns. They could be using that money to fund the solutions we need to address the climate crisis.

A sprouting plant. A closeup on tree bark. A rolling field of green. Young scientists pipetting into a petri dish. A soothing voiceover that says:

“We’re part of the solution.”

No, this isn’t a futuristic movie or a lesson on plant biology. If this sounds familiar, it’s because you’ve seen an advertisement from Exxon, Chevron, Shell, BP or another fossil fuel corporation.

In the last decade, the fossil fuel industry has spent huge amounts of money to convince the public that flowering plant imagery means that the industry is committed to a healthy future for all. It’s spent billions to sway public opinion and situate itself as a necessary part of the worldwide way of life.

In fact, the industry has spent $1.4 billion on advertising campaigns in the last 10 years to convince us that humans cannot and will not survive without fossil fuels.

The industry isn’t just embellishing what it does. When Big Oil says it’s committed to “green” causes, renewable energy, and actionable solutions to address the climate crisis, it is a completely false narrative. Oil and gas corporations are lying.

In reality, the bulk of what the fossil fuel industry is spending money on is fossil fuels. According to a report from the International Energy Association, Big Oil is investing 99% in fossil fuels, and 1% in renewable energy. 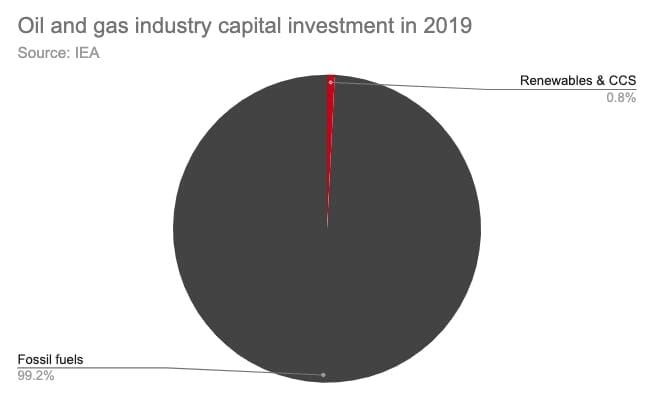 This is even more infuriating when you consider that oil companies like Exxon have known for decades about the threat of climate change. Instead of using this knowledge to shift business models or warn the public, Exxon wasted time and money to manipulate the information shared and stir up skepticism. Why? Per former employees, Exxon didn’t want to deal with policies that could potentially jeopardize its profits.

The oil and gas industry is pouring money into sustainability buzzwords, green imagery, and catchy advertising copy. The cognitive dissonance between what the industry says it’s doing and what it actually does is enormous.

Recently, the Guardian announced it will no longer allow the oil and gas industry to advertise in the outlet. The Guardian is the first major newspaper in the world to ban oil company advertisements.

In an interview with HEATED, the Guardian’s interim chief executive Ann Bateson said that as advertising makes up 40% of revenue at the Guardian, the decision wasn’t made lightly.

The message that fossil fuel advertisements were sending became a bigger concern for the Guardian.

“Promoting a product to consumers is qualitatively different from trying to change perceptions about what a company’s doing. [Fossil fuel companies] are essentially promoting an agenda—one often consistent with their lobbying,” Bateson said.

And she’s right. Big Oil is trying to influence public perception, and it’s spending lots of money to do so on a lot of different platforms. Recently, Exxon spent $50,000 in one week on political Facebook ads. It’s not alone. Here are just some recent examples of top oil and gas companies running Facebook ad campaigns using the “we’re building a sustainable future” narrative. 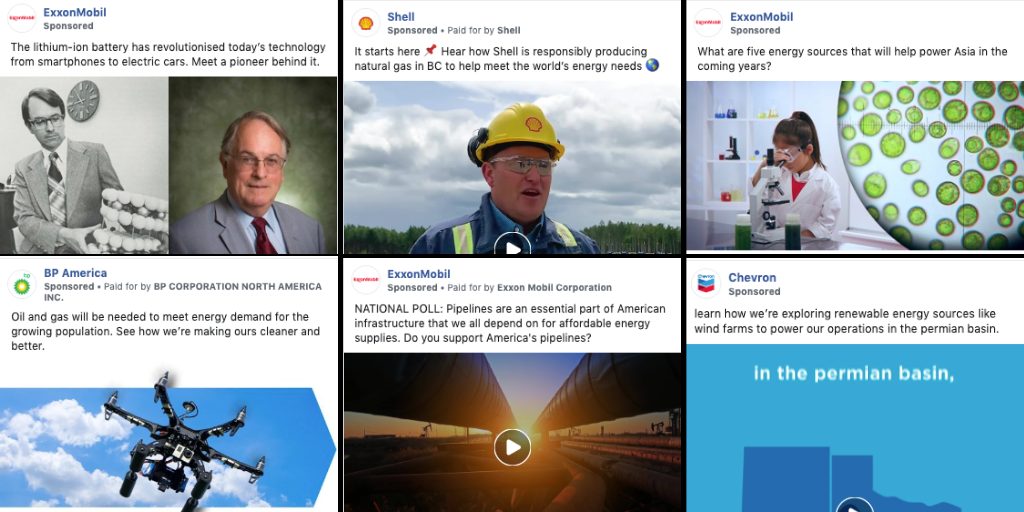 The oil industry is digging into the war-chest to use a variety of tactics to sway public opinion. Big Oil isn’t just using advertisements to sow confusion, it’s also using front groups.

Front groups are organizations created to mimic grassroots efforts. They’re funded by corporations to do corporate bidding by playing activist. They’ll use social media, advertising, the press and more to plant competing narratives into public discourse. Under the guise of a grassroots movement, these front groups create confusion and undermine actual activism.

Front groups employ disingenuous advertising campaigns to persuade the public that oil and gas companies are good, and those that hold them accountable are bad. 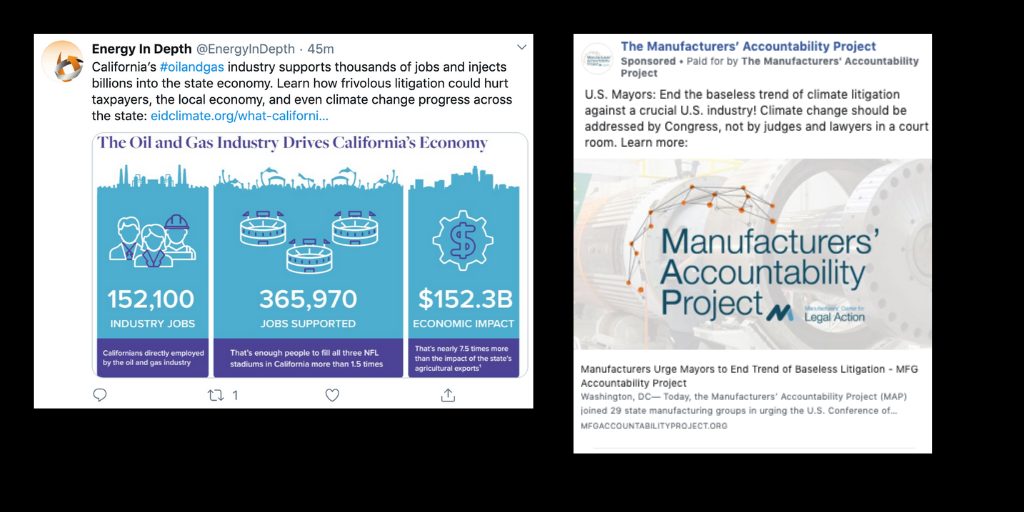 So what do we do? Fighting billion-dollar disinformation campaigns is no small feat.

We can start by supporting legislation to hold those that recklessly destroy the climate accountable for their actions. In November 2019, U.S. Senator Ed Markey introduced climate sanctions legislation called the “Targeting Environmental and Climate Recklessness Act.”

This legislation would allow the U.S. Government to impose sanctions on companies and individuals who recklessly escalate the climate crisis. It’s critical to hold bad climate actors accountable and using sanctions is just one tool to do so.

Other legislative opportunities include the Green New Deal resolution, which intends to address climate change and economic inequality through a package of legislative pieces.

We should also support bills like the Climate Action Now Act H.R. 9, that have already passed the House of Representatives. This bill would require the U.S. government to meet its obligation to the Paris Climate Accord.

It’s time to reject Big Oil’s billion-dollar green advertising campaign. The industry is spending billions to paint itself green, associate sustainability with extractive practices, and ultimately convince us that there is no future without Big Oil in it. Some will refer to what the industry is doing as “greenwashing.” We prefer to be more direct about it: Big Oil is lying.

Audrey Schreiber is the Digital Strategist at EarthRights International.