This message contains descriptions of violence, including against children, that might be upsetting for some readers. It originally appeared as an email to EarthRights supporters.

I was saddened last month as Myanmar’s military staged a coup to overthrow the government. Now, I’m stricken by how the military keeps unleashing murder, violence, and oppression on millions of peaceful protestors. Dozens of deaths have been reported so far, including several children shot with live ammunition, a medic beaten to death, and protestors who were detained and summarily executed.

After experiencing the 1988 student uprisings in Myanmar, I have also been horrified by the brutality of the military’s actions — using snipers to shoot some protestors in the head with real bullets. Thousands of people, including journalists and medical workers, have been violently detained. The military’s brutal wars continue in ethnic areas, displacing thousands of people. Meanwhile, this abuse directly serves the interests of high-ranking military officials and powerful oil and gas companies and will further undermine the human and environmental rights in Myanmar that EarthRights and so many defenders are already fighting to preserve, unleashing even more destruction and suffering.

Because we cannot stand by and watch the military and its leaders act with such violence and impunity, EarthRights has called on governments and corporations to do the right thing. In a statement that we posted last week, we called on the international community, including the United Nations, international financial institutions, and the governments of the United States and other nations, to take all available steps to block financial support of the military.

I was born in Burma (Myanmar) and lived there until 1988, when I was detained as a student, tortured, and exiled for speaking out against the military-led government.  I co-founded EarthRights in 1995 to challenge the human rights and environmental abuses that were taking place on oil and gas projects in Burma by two multinational corporations—Total and Unocal. The affected communities eventually settled lawsuits against the companies, a landmark victory in the climate justice movement, and a show of great community strength, resilience, and activism.

Over 25 years later, EarthRights continues to work closely with partners in Myanmar, and I am still in awe of the youth and women leading the movement now.

Since the military overthrew Myanmar’s elected government on February 1, breaking the 2008 Constitution, hundreds of thousands of protestors have taken to the streets every day to stand up for their democratic freedoms and defy the coup. They have resisted the military’s brutality with courage, ingenuity, and unwavering commitment — knowing full well that in doing so, they are putting their lives on the line.

I am inspired by the unity and determination shown by diverse groups of people coming together from across the country. EarthRights strongly supports the right of these protestors, collectively known as the Civil Disobedience Movement, to non-violently protest and disrupt the regime.

EarthRights stands in solidarity with our partners in Myanmar and the brave protestors fighting for justice there. They are all in our thoughts; we hope you will hold them in yours’ too. Thank you for supporting this global movement. 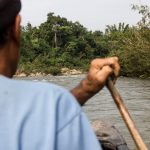