Home   »   Blog   »   A Dialogue on Chinese Investment in the Global South: Challenges and Possible Solutions

A Dialogue on Chinese Investment in the Global South: Challenges and Possible Solutions

A Special Economic Zone (SEZ) in Myanmar builds fossil fuel infrastructure. A dam in Cambodia displaces thousands of villagers. Big oil in Ecuador threatens an ecologically diverse national park, home to two of the last indigenous tribes living in voluntary isolation on the planet. What do all of these situations have in common? Chinese funding, disregard for environmental and social risks, and immense impacts to local communities.

China is now at the forefront of international development investment, but Chinese investors often prioritize energy projects with little regard for the consequences to local peoples. Last year was the first year in which China’s outbound investments were greater than its inbound investments. This marks a major turning point for China.

This past week in Chiang Mai, Thailand, EarthRights International and the Mott Foundation hosted a “Transcontinental Dialogue on Chinese Investment and Financing in the Global South.” This conference brought together leaders in the movement to monitor Chinese outbound investment and address the pattern of negative impacts that seem to follow these investments across the Mekong Region of Southeast Asia and Latin America. China’s role in development in the Global South will only continue to grow. It’s vital that affected groups and civil society leaders share information and strategize on ways to diminish the negative impacts of these investments on local people. It’s important to be familiar with a few cases of Chinese investment that have been having intense impacts on communities. 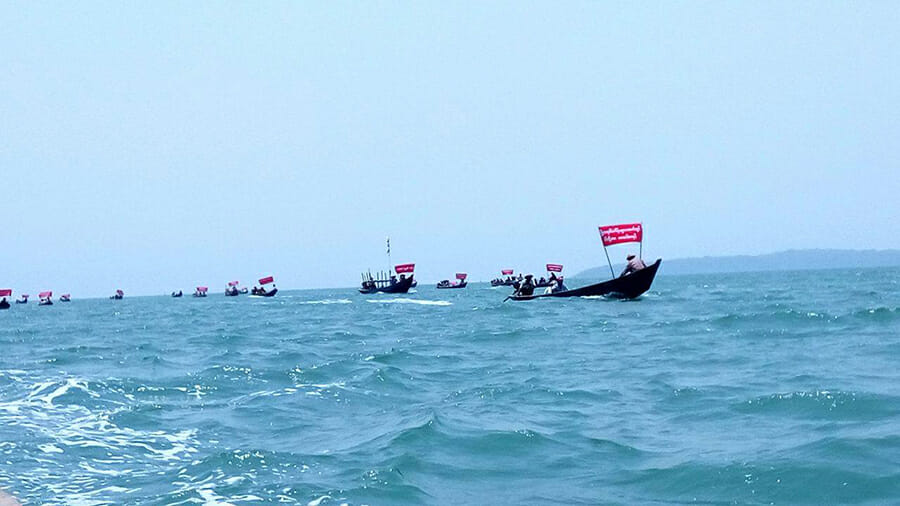 Fishermen aboard 120 boats protested along the Thanzit River against the Kyauphyu deep seaport. Photo by Tun Kyi/The Irrawaddy.

In Rakhine State, Myanmar, is the Kyaukphyu SEZ, right off the Bay of Bengal. This Special Economic Zone is supported by $10 billion of Chinese investment from state-owned enterprise CITIC. The SEZ is connected to energy and development projects such as a crude oil pipeline, a deep sea port in the Bay of Bengal, and an industrial park. This project has been met with intense criticism from local groups who fear displacement, loss of income, and detrimental impacts to the local environment.

Community members fishing in the area of the Lower Sesan 2 Dam.

The Lower Sesan 2 dam in Cambodia

The recently-completed Lower Sesan 2 Dam on the Sesan River in Cambodia is responsible for the eviction of nearly 5,000 people. Nearly 40,000 people may be on the verge of losing their fishing livelihoods. The Lower Sesan 2 Dam was constructed as a direct result of Chinese investment—the majority investor is Chinese state-owned enterprise HydroLacang. Local campaigners protested for years against the 800 million-dollar project, yet this didn’t stop the construction of the dam. The Mekong River and its tributaries, such as the Sesan River, flow through Cambodia and have provided a major source of food and livelihoods for generations. Chinese investment has pushed hydroelectric dams all throughout the Mekong region, specifically in Cambodia, Vietnam, and Laos.

Drilling for oil on indigenous land in Ecuador

The Yasuní-ITT Initiative is a controversial project by the Ecuadorian government to drill for oil in one of the most biodiverse areas on the planet, the Yasuní National Park. The park is not only a habitat for hundreds of species that exist nowhere else on the globe but is also home for tribes of indigenous people living in voluntary isolation, the Tagaeri and the Taromenane. The Yasuní-ITT Initiative puts all living inhabitants of the Yasuní National Park at risk by drilling for oil in an attempt to pay back debt for oil deals made between PetroChina and PetroEcuador. Initially, Ecuador implored the international community to donate money to pay back the Chinese loans. Not enough money was raised. The decision to drill has been met with local protest as well as international criticism.

Ivonne Ramos from Acción Ecológica shares her expertise on the case of oil extraction in the indigenous Sapara territory of Ecuador.

The importance of dialogue and strategizing

When different regions of the world face similar challenges due to development projects from similar investors, it’s vital to share experiences and information. It may be possible to diminish negative impacts such as large scale environmental consequences and injustices to people already at risk for marginalization. At last week’s conference in Chiang Mai, participants shared strategies for identifying points of leverage and reaching out to major financiers and Chinese enterprises.

They also discussed new guidelines that China has been introducing to monitor Chinese businesses acting abroad. Some of the guidelines include the National Development and Reform Commission’s “Opinions On Further Guiding and Regulating Overseas Investment Orientation,” which directly discusses the need to meet environmental protection standards. There are also initiatives such as the Environmental Risk Management Initiative for China’s Overseas Investment, which many Chinese organizations such as The Green Finance Committee and the China Banking Association have agreed to, just to name a few. The problem with these guidelines is that many of them are voluntary and there is really no way to enforce them. But opening a dialogue about these issues is a hopeful first step.

It must also be said that it isn’t just China that is embracing such an aggressive investment scheme. It’s not so much the actor as it is the impacts of these widespread development plans that signal a disregard for those impacted, both humans and the Earth. Last week’s “Transcontinental Dialogue on Chinese Investment and Financing in the Global South” provided an important space to share strategies for ensuring that communities don’t have to face negative impacts in the future.